MANILA – President Ferdinand “Bongbong” Marcos Jr. returned to Singapore over the weekend to reinforce talks during his recent state visit there and encouraged anew investments in the country, a Palace official said Monday. 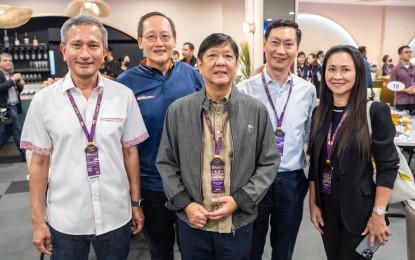 Press Secretary Trixie Cruz-Angeles, in her official Facebook page, shared a screenshot of a post made by Singaporean Manpower Minister Tan See Leng confirming Marcos’ trip to the city-state.

Marcos met with Singaporean investors on the sidelines of the Formula One Grand Prix race in Singapore on Sunday night.

She did not provide further details as of posting time.

Tan, on his Facebook post, said he met other heads of state, ministers, and foreign dignitaries apart from Marcos.

“Last but not least, especially happy to have our community and tripartite leaders and front-liners at the event. Thank you for your contributions towards the fight against Covid-19 over the last 2 years,” he added.

During his first state visit to Singapore from Sept. 6 and 7, Marcos brought home USD6.54 billion (PHP374.57) in investment pledges.

The commitments, expected to generate jobs for 15,000 people, include a USD5 billion investment in electric tricycles.

“This investment in the transportation sector is seen to lessen air pollution emitted by an estimated 3.5 million tricycles nationwide,” Malacañang said.