MANILA – Outgoing President Rodrigo Roa Duterte did not pass up the chance to serenade his fans and supporters despite being invited as special guest at the “Salamat PRRD” thanksgiving concert at the Quirino Grandstand in Manila on Sunday night. 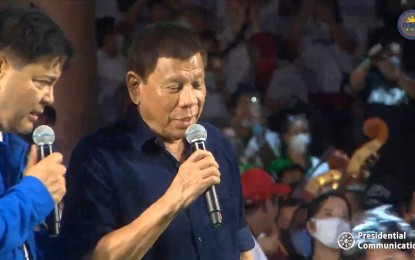 FAVORITE SONG ‘IKAW’. President Rodrigo Roa Duterte serenades his fans and supporters with his favorite love song “Ikaw” with concert king Martin Nievera singing with him during the “Salamat PRRD” thanksgiving concern at the Quirino Grandstand in Manila on Sunday night (June 26, 2022). Duterte is set to end his six-year term on June 30. (Screengrab from RTVM)

Although international singer and Concert King Martin Nievera had already sung “Ikaw” earlier in the program, Duterte was requested to sing the love song himself with Nievera singing some parts of the song.

A fireworks display was also set off while the President was belting out what he earlier named as his favorite song.

There was also a drone show with a rendering of the words “Salamat (Thank You)” and “PRRD”, the president’s face, his fist symbol, and the Philippine flag.

Duterte also delivered a short speech, thanking all attendees for showing up despite the rain.

“Maigsi lang po. Sa sambayanang Pilipino, maraming, maraming salamat sa inyo (This will be short. To all Filipinos, thank you very much),” he said and returned back to his seat to enjoy the rest of the program.

Throughout the program, officials, celebrities, and supporters also posed for photos with Duterte.

Around 3,500 people flocked to the Quirno Grandstand that also served as venue for Duterte’s miting de avance in 2016 elections.

Duterte will step down from office by noon of June 30. He will be succeeded by President-elect Ferdinand Marcos Jr.

Both Marcos and Duterte’s daughter, Sara Duterte, overwhelmingly won in the last May 9 presidential and vice presidential elections, respectively, under UniTeam ticket.