Whatever Russia Does in Ukraine, China Will Be Watching

by Nicholas Hanson, The National Interest

Home/Opinion/Whatever Russia Does in Ukraine, China Will Be Watching
Previous Next

Whatever Russia Does in Ukraine, China Will Be Watching

At the strategic level, the situation provides Xi Jinping with a priceless opportunity to observe how NATO responds to overt military aggression on its periphery. 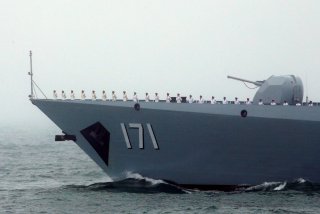 While the West ponders whether Vladimir Putin will invade eastern Ukraine, Xi Jinping watches. For China, Ukraine is a convenient proxy for Taiwan. How NATO responds to Russian aggression will serve as a barometer for the Chinese Communist Party (CCP) to calculate how the United States and its network of Asia-Pacific allies might react to unprovoked Chinese aggression against Taiwan. At the operational and tactical levels, the People’s Liberation Army (PLA) could gain invaluable insight from how the Russian Armed Forces move against Ukrainian territory. As the Biden administration and NATO engage in security talks over Ukraine with their Russian counterparts, the West should consider the message it intends to send to the Kremlin and Zhongnanhai.

As the Center for Strategic and International Studies’ Jonathan Hillman identified in 2018, the relationship between China and Russia is an awkward one. Despite an ostensible divergence of national interests, the two align on issues of territorial integrity against perceived Western threats. Xi and Putin openly exude a charismatic relationship and flaunt having met more than thirty times since 2013, including a December 2021 virtual chat seemingly held in response to President Joe Biden’s Summit for Democracy. During that videoconference, Xi stated, “We firmly support each other on issues concerning each other’s core interests and safeguarding the dignity of each country.” The former is a veiled reference to Taiwan, while the latter represents the shadow the EU and NATO cast over Ukraine.

The comparisons between Russian threats against Ukraine and Chinese intimidation against Taiwan are prophetic: Russia and China, two revanchist powers, are threatening military aggression to regain territory they consider to be rightfully theirs but lost by a combination of external trickery and internal treachery. Ukraine and Taiwan are vibrant democracies with free-market economies that border behemoth neighbors demanding a blend of sovereignty and influence over their territory. Both Kyiv and Taipei rely on the West for soft and hard power support against this increasingly relentless external pressure.

Yet China’s reliance on Russia to mitigate weaknesses in its military forces is not novel. In 2018, the PLA sent approximately 3,000 troops to Russia’s Eastern Military District in support of exercise VOSTOK, allegedly the largest military training event held on Russian soil since 1981. This deployment began an annual, combined exercise series with the 2021 iteration held for the first time in China. The PLA’s lack of recent operational experience is a known Achilles heel for its leadership. So, the CCP’s sudden willingness to deploy thousands of troops beyond its borders and subsequently allow a reciprocal number of foreign troops to enter its territory can be partly explained as an attempt to close this glaring gap.

In addition to learning Russian best practices, the PLA can witness their execution and the associated success or failure of entirely new operational concepts. The U.S. Intelligence Community has long assumed that part of China’s opening campaign against Taiwan would include a naval blockade of the island. But the Chinese could instead follow Russia’s lead. When “little green men” invaded Crimea in early 2014, Russia integrated land-based isolation of multiple naval bases without firing a shot. China may not employ this model in a future invasion of Taiwan. However, a “Battle of the Bulge” style infiltration using specially manned, trained, and equipped special operations forces that infiltrate and preposition to force a fait accompli could diminish the need for a mass mobilization of ships, aircraft, and soldiers that many believe would forewarn a PLA invasion.

At the strategic level, the situation provides Xi with a priceless opportunity to observe how NATO responds to overt military aggression on its periphery. America’s network of Asia-Pacific allies and partners is formidable. Yet, if NATO—an organization formed to counter Soviet threats—fails to confront Russian belligerence, Xi may write-off America’s Asian alliances. Any lack of resolve in Washington or Brussels to help Ukraine keep Russia at bay could signal a similar fate for Taiwan.

As the Biden administration works with its European allies to craft a credible deterrence strategy ahead of the upcoming talks, Ukraine should not be the only item on the agenda. The West should operate under the premise that Putin’s self-declared best friend will also be at the negotiating table. He may not have a voice in the discussion, but Xi’s presence will be felt, nonetheless.

Nicholas Hanson is a Mission Strategy Lead at Vannevar Labs. He is a class of 2024 joint degree MPP and MBA candidate at the Harvard Kennedy School of Government and the Harvard Business School. He previously served as an intelligence officer in the United States Marine Corps.