New Caledonia votes to stay with France, but it’s a hollow victory that will only ratchet up tensions

by David Robie, The Conversation

Home/Analysis/New Caledonia votes to stay with France, but it’s a hollow victory that will only ratchet up tensions
Previous Next

New Caledonia votes to stay with France, but it’s a hollow victory that will only ratchet up tensions

Analysis – “Loyalist” New Caledonians handed France the decisive victory in the third and final referendum on independence it wanted in Sunday’s vote. 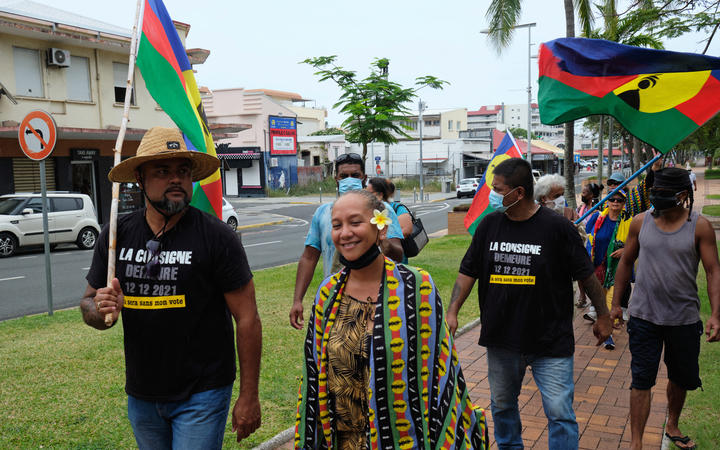 Supporters of independence demonstrate as they hold Kanak flags the morning after the self-determination referendum in Noumea, New Caledonia. Photo: AFP

“Loyalist” New Caledonians handed France the decisive victory in the third and final referendum on independence it wanted in Sunday’s vote.

But it was a hollow victory, with pro-independence Kanaks delivering Paris a massive rebuke for its three-decade decolonisation strategy.

The referendum is likely to be seen as a failure, a capture of the vote by settlers without the meaningful participation of the Indigenous Kanak people. Pacific nations are unlikely to accept this disenfranchising of Indigenous self-determination.

In the final results on Sunday night, 96.49 percent said “non” to independence and just 3.51 percent “oui”. This was a dramatic reversal of the narrow defeats in the two previous plebiscites in 2018 and 2020.

However, the negative vote in this final round was based on 43.9 percent turnout, in contrast to record 80 percent -plus turnouts in the two earlier votes. This casts the legitimacy of the vote in doubt, and is likely to inflame tensions.

One of the telling results in the referendum was in Tiendanite, the traditional home village of celebrated Kanak independence leader Jean-Marie Tjibaou. He negotiated the original Matignon Accord in 1988, which put an end to the bloodshed that erupted during the 1980s after a similar failed referendum on independence. In his village, it was apparently a total boycott, with not a single vote registered.

In the remote northern Belep islands, only 0.6 percent of residents cast a vote. On the island of Lifou in the mainly Kanak Loyalty Islands, some of the polling stations had no votes. In the Kanak strongholds of Canala and Hiènghene on the main island of Grande Terre, less than 2 percent of the population cast a vote.

Macron criticised for pressing ahead with vote

The result will no doubt be a huge headache for French President Emmanuel Macron, just months away from the French presidential elections next April. Critics are suggesting his insistence on pressing ahead with the referendum in defiance of the wide-ranging opposition could damage him politically.

However, Macron hailed the result in Paris, saying,

“Tonight, France is more beautiful because New Caledonia has decided to stay part of it.”

He said a “period of transition” would begin to build a common project “respecting the dignity of everyone”.

Pro-independence Kanak parties had urged postponement of the referendum due to the Covid crisis in New Caledonia, and the fact the vote was not due until October 2022. The customary Kanak Senate, comprising traditional chiefs, had declared a mourning period of one year for the mainly Indigenous victims of the Covid surge in September that had infected more than 12,000 people and caused 280 deaths.

While neighbouring Vanuatu also called for the referendum to be postponed, the Pacific Islands Forum (PIF) provided a ministerial monitoring team. The influential Melanesian Spearhead Group (comprised of Papua New Guinea, Vanuatu, Fiji, Solomon Islands and New Caledonia’s independence coalition), refused to recognise the “unilateral” referendum, saying this was “a crucial time for Melanesian people in New Caledonia to decide their own future.”

A coalition of Pacific civil society organisations and movement leaders joined the opposition and condemned Paris for “ignoring” the impact the health crisis had “on the ability of Kanaks to participate in the referendum and exercise their basic human right to self-determination.”

A trio of pro-independence advocates had also travelled to New York last week with New Caledonia Congress president Roch Wamytan and declared at the United Nations that a plebiscite without Kanak participation had no legitimacy and the independence parties would not recognise the result.

Pro-independence leaders insist they will not negotiate with Paris until after the French presidential elections. They have also refused to see French Overseas Minister Sebastien Lecornu, who arrived in Noumea at the weekend. They regard the minister as pandering to the anti-independence leaders in the territory.

Why is New Caledonia so important to France?

Another referendum is now likely in mid-2023 to determine the territory’s future status within France, but with independence off the table.

Some of France’s overseas territories, such as French Polynesia, have considerably devolved local powers. It is believed New Caledonia may now be offered more local autonomy than it has.

New Caledonia is critically important to France’s projection of its Indo-Pacific economic and military power in the region, especially as a counterbalance to growing Chinese influence among independent Pacific countries. Its nickel mining industry and reserves, important for manufacturing stainless steel, batteries and mobile phones, and its maritime economic zone are important to Paris.

Ironically, France’s controversial loss of a lucrative submarine deal with Australia in favour of a nuclear sub partnership with the US and UK enhanced New Caledonia’s importance to Paris.

The governments in Australia and New Zealand have been cautious about the referendum, not commenting publicly on the vote. But a young Kanak feminist artist, Marylou Mahé, wrote an article widely published in New Zealand last weekend explaining why she and many others refused to take part in a vote considered “undemocratic and disrespectful” of Kanak culture.

“As a young Kanak woman, my voice is often silenced, but I want to remind the world that we are here, we are standing, and we are acting for our future. The state’s spoken word may die tomorrow, but our right to recognition and self-determination never will,” she said.