Week in Politics: Is New Zealand really like North Korea?

Home/Analysis/Week in Politics: Is New Zealand really like North Korea?
Previous Next

Week in Politics: Is New Zealand really like North Korea?

Analysis – Sir John Key stirs up the pandemic debate and stands by his North Korea comparison, the government scorns National’s plan for ending lockdowns and re-opening the border, the new MIQ allocation system is described as a “virtual disaster” and there’s a poll that should trouble both the main parties. 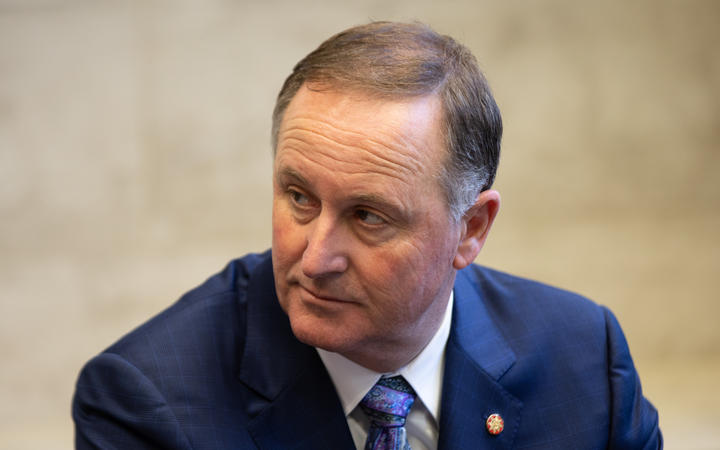 Sir John Key took a stick to the government over its handling of Covid-19. Photo: RNZ / Dan Cook

During a week packed with significant political events one gained more publicity than any other: Sir John Key took a stick to the government over its handling of Covid-19 and described New Zealand as a “hermit kingdom”.

The former prime minister’s article was published in Sunday papers and the next day he was a ll over radio and TV.

The Herald’s political editor Claire Trevett said it was a horror story for National’s leader Judith Collins. “He has had more publicity in one day than Collins has managed since the outbreak began.”

Stuff’s Henry Cooke said those still a bit groggy at 7am could be forgiven for thinking they had woken up in 2016.

In his article, Key said New Zealand had become “a smug hermit kingdom… some people might like the North Korean option, I’m not one of them.”

He accused the government of running a “fear and hope” strategy as it responded to Covid-19.

Trevett said that putting aside the “rhetorical flourishes” Key’s article amounted to a call for certainty about when New Zealand would join other countries that were opening up, a call for more to be done to get there, and valid criticism of the MIQ system’s inadequacy in catering to the demand for it.

Key set out his own suggestions on what the pandemic response should look like. The article is on media websites.

Covid-19 Response Minister Chris Hipkins said the “smug hermit kingdom” comment was an insult to New Zealanders who had achieved some of the highest rates of freedom in the world under the government’s go hard, go early policies.

“I think it is a great piece of politics,” he said on TVNZ’s Q&A programme. “But actually many of the things John Key is arguing for are already happening now.”

Key told Morning Report it wasn’t over the top to liken New Zealand to North Korea and said all the government had done was make people fearful. “All they have done is lock us down… any prime minister can do that.”

Stuff’s Wellington editor Anna Fifield took issue with Key’s North Korea comparison. She said she had visited the country 12 times reporting for the Financial Times and the Washington Post, and had written a book about its leader Kim Jong Un.

“It grossly diminishes the suffering of 25 million people in the world’s most totalitarian state. The people of North Korea… don’t deserve to be your punchline, Sir John Key.”

Fifield said Key would not have been able to voice such criticisms if he was in North Korea, and described how Kim Jong Un had his defence minister killed with an anti-aircraft gun after falling asleep during a meeting, among other acts of disrespect.

Key said he had not known National had put together its own Covid-19 response plan and intended releasing it on Wednesday.

There would be a traffic light risk-based system to prioritise quarantine-free entry for fully vaccinated travellers.

Collins said her party believed all the Kiwis stranded overseas waiting for MIQ slots would be able to come home for Christmas, if they were fully vaccinated.

She told Morning Report the country couldn’t continue the way it was. “We’ve had 17 weeks of lockdown in the last 18 months. It cannot continue like this. The government needs to accept that. Their elimination strategy no longer works.”

Collins disingenuously offered the entire plan to the government so it could implement it immediately.

Far from accepting it, the government mocked and attacked it. Ignoring the precautions hedged around the plan, Hipkins said it would mean hundreds of thousands of people coming in from all over the world. Stopping Covid getting in would be impossible.

All National was promising was “Covid for Christmas,” he said.

In Parliament, Grant Robertson sang to the tune of Twelve days to Christmas: “On the first day of Christmas National gave to me… Covid.”

The contrast between the government’s cautious approach and National’s bolder plan raised comment.

“The political strategy may well be tactical folly,” said Stuff political editor Luke Malpass. “Almost all polling data suggests that the public is on the government’s side on this one.”

Malpass said there was genuine conflict in the community.

“On the one hand people want this all to be over, to see friends and family, and conduct business, study or work abroad,” he said.

“Some sectors of the economy are crying out for both professional experts and tourists to return and, most pressing domestically, to provide a pathway forward with no lockdowns.

“On the other hand, many of the same people also don’t want Covid in New Zealand.

“Depending on how strong that second impulse is will entirely determine how National’s plan is received.”

Meanwhile this week, the true extent of the MIQ problem was revealed when the second tranche of slots was offered through the virtual lobby system and 31,319 people queued for 3800 slots.

Under the previous first-come, first-served system the number of people trying to book wasn’t seen with any certainty. Now it is.

The Herald’s Trevett described it as “a virtual disaster” and said that even when the rooms for the rest of the year had been drip-fed out there would still be at least 20,000 people left waiting.

Despite the numerous reports of distraught Kiwis who can’t get home, there hasn’t been a surge of public outrage over the system’s vast incapacity and no obvious outpouring of sympathy for those who have waited months.

Instead, comments are often heard about people having gone on holiday and who should have known better. It could be that the government isn’t greatly worried about the political fallout from what is happening, despite frequently expressing its deep concern.

What the government and the National Party should be concerned about was the TVNZ Colmar Brunton poll released this week.

The fact Collins was behind Seymour as preferred prime minister was “the worst kind of news” for National.

“There are definitely active moves or talk about removing her as leader from a number of MPs who are very, very unhappy with her leadership and not just her performance but also the kind of culture that is in the caucus at the moment,” Patterson said.

The Herald’s Thomas Coughlan pointed out that Labour had now dropped in consecutive polls and Ardern had also lost support as preferred prime minister although she still rated 44 percent.

Ardern should be worried because the drop in support for Labour had shown up in polls taken during lockdown, he said.

“The 2020 lockdowns rewarded Ardern, sending Labour rocketing in the polls. The drop this time indicates people are losing patience with the measures they are being asked to take – and blaming the government for it. The mood is turning.”

Seymour’s optimistic comment was: “This puts us on track for a change of government.”

Other political events this week, which would have gained more publicity if the news hadn’t been dominated by Covid-19, included:

The government announced a one-off opportunity for migrants on temporary work visas to apply for residence.

There could be about 110,000 applicants, RNZ reported, including more than 5000 health and aged care workers, around 9000 primary industry workers and more than 800 teachers.

Immigration Minister Kris Faafoi said about 55,000 of their family members already here would be covered.

“We are providing a way forward for our migrant families who have been long disrupted by Covid-19, while ensuring businesses have the certainty they need to plan into the future and continue driving the economic recovery,” he said.

In Parliament the bill was passed into law. Labour and National supported it on its third reading, ACT, the Greens and the Māori Party opposed it.

It makes planning or preparing for a terrorist attack a criminal offence, and was put on the fast-track after the Auckland supermarket attack in which Ahamed Samsudeen was shot dead.

The Crown had tried to charge him under the Terrorism Suppression Act but planning to commit a terrorist act was not considered an offence.

Details of the pilot programme for home isolation were released. The aim is to find out how an alternative to MIQ could work for citizens and residents who are vaccinated and not considered high risk.

There will be 150 participants chosen from applicants travelling for work purposes. Depending on the outcome of the pilot, the programme will eventually be widened.