Analysis – This week’s anniversary of the 11 September attacks on the United States in 2001 is also an opportunity to recall the impact the tragedy – and the response to it – had on New Zealand’s wider foreign policy. 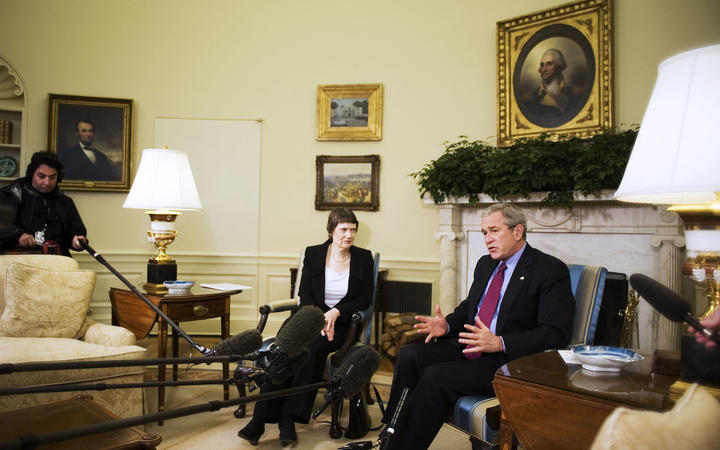 US President George W. Bush speaks to the press during a meeting with New Zealand Prime Minister Helen Clark on 21 March 2007 in the Oval Office. Photo: AFP

New Zealand immediately supported the US invasion of Afghanistan in pursuit of Osama bin Laden and Al Qaeda, with an initial deployment of Special Air Service (SAS) combat soldiers.

A Provincial Reconstruction Team (PRT) in Bamyan province followed in 2003.

Amidst the recent US withdrawal, and the Taliban’s renewed takeover of the country, tough questions are now being asked about the futility of the war in Afghanistan.

New Zealand clearly and unequivocally responded to George W. Bush’s ultimatum, made in a speech to a joint session of Congress on 20 September 2001: “Either you are with us or you are with the terrorists”.

Afghanistan was one of New Zealand’s longest-ever military deployments – ending only this year, in tandem with the US’s own withdrawal from the country.

The level of New Zealand’s commitment was by no means inevitable.

Prior to 11 September, New Zealand relations with the US had been shaky.

History loomed over the relationship.

The US had dispatched the ship to New Zealand as a test of the new Labour government’s nuclear-free policy.

As punishment, New Zealand was effectively kicked out of the Anzus defence alliance – of which it had been a member since 1951 – and was stripped of its status as a US ally.

George Shultz, Reagan’s Secretary of State, made clear his view of the new US position towards New Zealand: “The time has come to part. We part as friends – but we part.”

There had been some improvement to the US-NZ relationship in the 1990s, helped by the fact that US President Bill Clinton (a Democrat) and New Zealand Prime Ministers Jim Bolger and Jenny Shipley (both from the National Party) did not share the baggage of the 1980s.

Bolger visited the White House in 1995, while Bill Clinton made a state visit to New Zealand in 1999 as part of the APEC summit held that year.

But fast forward to 2001, and the baggage was back.

It was also personal: Clark had been a Labour MP at the time of the nuclear row and a firm supporter of the nuclear-free policy, while Bush’s father had served as Vice President to Ronald Reagan during the 1980s.

Strategic decisions made during Clinton’s last and Clark’s first year in office, in 2000, also did not bode well from the US point of view.

Clark vetoed a decision made by Shipley near the end of her time in government to buy F-16 fighter jets from the US.

The F-16 decision formed part of a wider strategic realignment for New Zealand’s military, under which the Labour-Alliance coalition government also decided to abolish the air force’s combat wing.

The underlying rationale was that New Zealand should instead focus its efforts on supporting the increasing number of peacekeeping missions it had been undertaking since the end of the Cold War.

Greater military cooperation with the US was not on the agenda.

In fact, in May 2001, Clark said New Zealand found itself in an “incredibly benign strategic environment” – a phrase that was often repeated back at her by her political opponents after 9/11.

In any event, New Zealand’s solidarity with the US and its Afghanistan commitment – the centrepiece of what Bush called the “war on terror” – brought an unexpected thaw in relations.

Clark was invited to the White House in March 2002, and there was even talk of a free trade deal, which had previously seemed like an impossibility due to New Zealand’s nuclear ship policy.

What appeared to really change matters was the Iraq War. Clark staunchly opposed the war – citing its lack of UN mandate – and any prospect of a free trade deal was abruptly taken off the table.

Instead, the US rewarded supporters of the Iraq War with free trade agreements – with Australia and Singapore at the top of the list.

At the time, the differences over Iraq made it seem that any improvement New Zealand-US relations had again stalled.

The nuclear ship issue was once again seen as the main roadblock to the full restoration of ties.

The issue gained particular prominence in 2004 when Don Brash, then the National Party leader, was noted by officials as saying the ban would be “gone by lunchtime” under a future National-led government.

But there were advantages to the diametrically opposed positions over Iraq.

With the US position seemingly crystal clear, New Zealand’s wider foreign policy agenda was largely freed up for other matters.

The focus moved to negotiating free trade agreements with other countries – following a 2001 model agreement with Singapore and amidst World Trade Organization’s ill-fated Doha round of negotiations.

New Zealand’s free-trade efforts first bore fruit in 2005 when an agreement was signed with Thailand.

Even more interesting was an agreement signed later that year – as a grouping of Pacific Rim countries called the “P4”.

The agreement with Brunei, Chile and Singapore was the genesis for what ultimately became the 11-country Comprehensive and Progressive Trans Pacific Partnership (CPTPP).

In hindsight, the fallout from the 9/11 attacks – and the invasions of Afghanistan and Iraq – did New Zealand foreign policymakers a favour.

Afghanistan gave New Zealand an opening to show the US what it had to offer, while Iraq clearly showed New Zealand the limits of that engagement.

Without Iraq, New Zealand might have continued to put even more effort into repairing its US relationship – which could have prevented it from moving on to a more diversified trade focus.

But what is even more remarkable is that New Zealand ultimately ended up almost having its cake and eating it too.

Against the backdrop of New Zealand’s commitment in Afghanistan, but also with the simple passage of time, the nuclear ship issue that had once seemed so central essentially faded into the background.

Significantly, then Secretary of State Condoleezza Rice called New Zealand an ally in 2008, and diplomatic cables from Wikileaks revealed that US quietly resumed full intelligence sharing with New Zealand in 2009.

New Zealand’s defence ties with the US have also largely been restored. Since 2014, New Zealand ships have again fully participated in US-led ‘Rim of the Pacific’ military exercises.

And in 2016, New Zealand even came within a whisker of securing a free trade deal with the US – as part of the CPTPP – until Donald Trump withdrew from the arrangement shortly after taking office.

Despite this setback, it is probably only a matter of time until New Zealand concludes a free trade deal of some kind that involves the US.

After all, the US is now taking a much greater interest in New Zealand and its neighbourhood – as part of its Indo-Pacific vision that seeks to challenge China’s perceived dominance.

Ultimately, the September 11 attacks triggered a chain of unforeseen actions and decisions.

The impact of the tragedy changed the course of US foreign policy.

It changed the trajectory of New Zealand’s foreign policy too.