NZ ‘sleep-walked’ into conflict between China and Western allies – expert

NZ ‘sleep-walked’ into conflict between China and Western allies – expert

New Zealand “sleep-walked” into a position where it is torn between its economic dependence on China and its traditional allies, a foreign policy expert says. 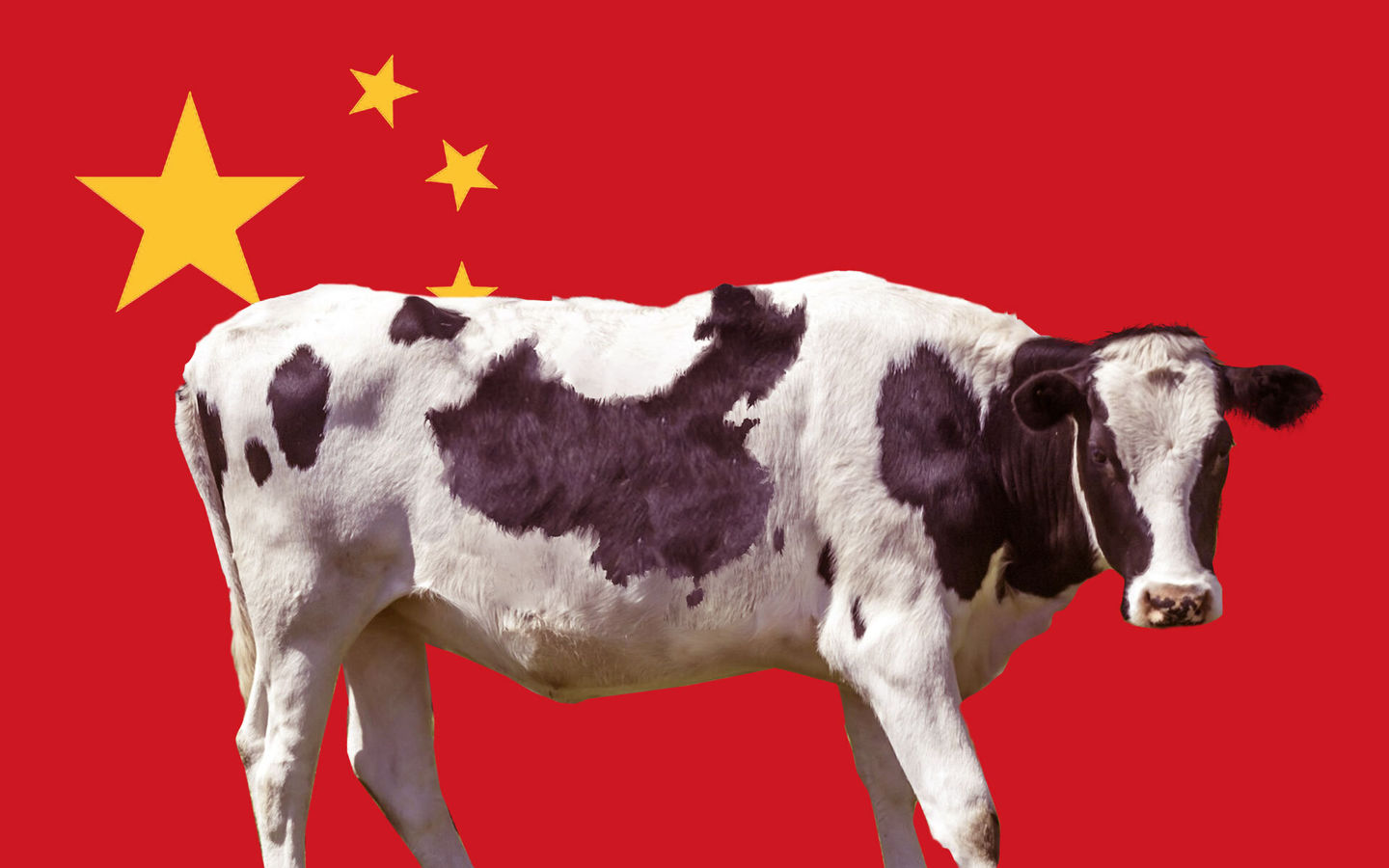 University of Waikato’s Dr Reuben Steff said it was clear 10 to 15 years ago that if New Zealand continued to increase exports to China, it would soon end up having to tip-toe between the emerging global super power on the one hand and the US, UK, Australia and Canada on the other.

“It was pretty clear that as China’s power rose it would eventually start butting heads pretty heavily with the United States and yet we have still sleep-walked into this position,” Dr Steff said.

His comments come as an RNZ data analysis shows China now accounts for one third of New Zealand’s merchandise export earnings, with more than $11 billion coming from food and beverage exports. In 2020, China was our top buyer of dairy produce, sheep meat, seafood, kiwifruit, honey, water and second biggest buyer of beef.

New Zealand’s relationship with China has come under international scrutiny since it declined to join its Five Eyes intelligence alliance partners – the US, UK, Australia and Canada – in jointly condemning China’s treatment of Uyghur Muslims, an ethnic minority group understood to be suffering human rights abuses in Xinjiang.

Nor did New Zealand join the other Five Eyes countries in expressing concern over China’s moves in the troubled regions of Hong Kong, Taiwan and the South China Sea.

New Zealand also shied away from following the US and the UK in declaring China’s treatment of Uyghurs “genocide”, with Trade Minister Damien O’Connor admitting doing so would make China unhappy.

China recently banned imports of some Australian goods and introduced hefty tariffs on others after the countries butted heads.

“You’re talking about private organisations and businesses that have decided to increase the trade and exports to China.”

The government seemed uninterested in doing so anyway and in fact seemed to be encouraging increasing trade by upgrading the 2008 NZ-China trade agreement this year, Dr Steff said.

“It’s going to deepen our economic dependence on China, rather than encourage diversification,” he said.

“It seems like the optimal strategy is the strategy we’re on right now, which is continually trying to appease our close Western partners and allies, but also to ensure China understands that we do not always walk in complete lockstep with our friends and allies.

But it was a “guessing game” as to how long it could keep that up, Dr Steff said.

Commentators have warned a Cold War is brewing between the US and China and New Zealand will be stuck in the middle.

“The world may not let us be friends with everyone. I feel like this, to some degree, was fairly foreseeable and inevitable, yet here we are,” Dr Steff said.

Australia, Chile, Peru and Korea all had higher exposure, according to 2018 figures. Around a quarter of New Zealand goods are exported to China. For Australia it was 34.7 percent, Chile it was 33.5 percent, Peru 27.6 percent and Korea 26.8 percent.

“Concentration, it certainly carries risks. But what we just need to be cognisant of is that businesses and individuals do trade with each other. They are aware of the risk – and increasingly so. They do factor that into the decision making,” Maidment said.

Economist Shamubeel Eaquab pointed out that our exposure to China is lower than what our exposure was to the United Kingdom between the 1870s and 1940s, when 70 percent to 90 percent of our goods were exported there.

Without China’s demand for products, our primary sector would not have grown as much as it has and our economy would be smaller, he said.

He said no other country would consume the same amount of those New Zealand products and that presented a quandry.

“Those risks are absolutely there, but at the same time, you need to understand that the reason why New Zealand exports so much is because we’re so good at it. Our cost of production is low, the quality of production is very high, not kind of diminishing the issues with things like environmental costs, but we are actually very, very good at producing food. And that gives us a competitive edge.”

A Westpac economic bulletin ranked the industries most exposed to China as tourism, export education and seafood, with meat, wood and fruit considered medium risk. The lowest risk market is thought to be wine, as China isn’t a big customer, and one which may come as a surprise to many, given it’s value; dairy.

New Zealand’s $5.4bn of dairy exports accounts for almost half of China’s dairy imports and the report says China’s domestic supply is small, plus there are “very few other options” globally available to replace this amount from other countries.

On the other hand, seafood from New Zealand accounts for only 3.1 percent of China’s imports but represents 30 percent of our export earnings.

China was New Zealand’s top purchaser of over 300 different food and non-food related exports in 2020. Around 50 of these goods were worth over $1 million in earnings in 2020 and China’s percentage of New Zealand’s overall export earnings was greater than 50 percent. Live rock lobsters were close to the top of the list of items where China is our biggest customer, but it has other bigger suppliers.

Sanders Unsworth consultancy founder Charles Finney was New Zealand’s lead negotiator of the China-New Zealand Free Trade Agreement in 2008. He said as a whole, he did not lose sleep over New Zealand’s exposure to China, but thought some companies were heavily exposed.

The rock lobster trade was a prime example of what could happen to a heavily exposed market. In 2019, China took 96 percent of New Zealand’s exports. When the Covid-19 pandemic grounded flights, rock lobster trade screeched to a halt and China cancelled orders. New Zealand was left holding between 150 and 180 tonnes of live rock lobsters. Many were returned to the sea but the industry took a $38m hit in just eight weeks.

New Zealand should be wary of China’s habit of using trade as a political lever, Finny said.

As well as Australia, South Korea, Taiwan and Norway have all borne the brunt of a China scolding via trade.

“There are increasing differences in the political arena over such things as the South China Sea, Taiwan Strait, Xinjiang, Tibet, Hong Kong. It is possible one day that New Zealand criticisms would cause China to say, ‘Hey, you’ve gone too far and back down, or else,’ and if we don’t back down, then there might be some retaliation.”

These political differences are important to the New Zealand public according to a recent survey from the Pew Research Centre which shows Kiwis think strengthening trade with China is less important than promoting human rights. 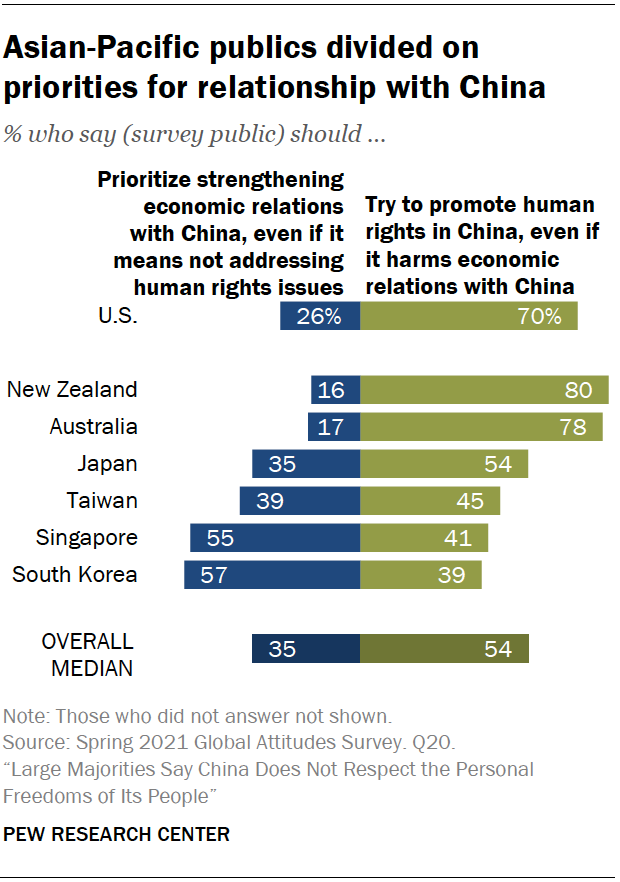 If New Zealand wanted to reduce its exposure by diversifying export markets for agricultural products there were some markets worth considering, and some we have little hope of breaking into, Finny said.

India had a similar population to China, but Finny said they were the world’s biggest dairy producer and with farmers being poor, there was resistance to opening up their market.

Instead he saw “huge potential” in the Middle East, as well as Turkey, Ukraine, Nigeria and Angola.

Russia could also present an opportunity, although at present he said the government was discouraging companies from profiting off trade sanctions other countries have put in place against Russia.

What would Russia buy from New Zealand?

“Pretty much everything we produce.”