Megan Woods: Yes, there is hope for young NZ generations on housing

by Megan Woods, The Spinoff

Home/Opinion/Megan Woods: Yes, there is hope for young NZ generations on housing
Previous Next

Megan Woods: Yes, there is hope for young NZ generations on housing 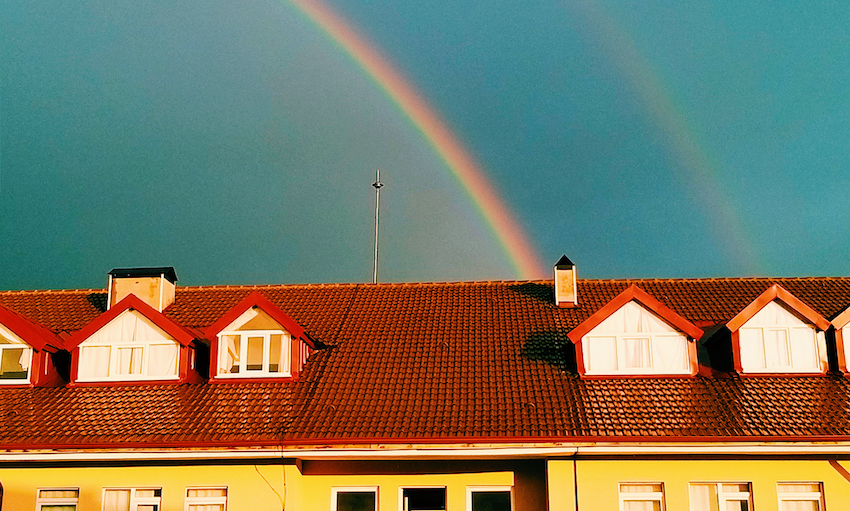 In his When the Facts Change podcast and accompanying column last week, Bernard Hickey argued that hope was lost for most young New Zealanders who wished to buy a home and achieve the financial security that comes with it. We invited the housing minister, Megan Woods, to respond.

Deeply embedded in the DNA of Labour politicians and policies is Norman Kirk’s articulation of the intertwining of homes and hope with the aspirations of New Zealanders.

Bernard Hickey’s recent Spinoff column titled How hope for a generation was lost highlights the upward trajectory of house prices over the last two decades and paints a despairing picture for those on the outside of the housing market.

It is why tackling the housing crisis we inherited when we came into government must remain a major focus for us. It is why we’re building upon the work we started in our first term to turn on every regulatory tap we can, and investing more funding than there has been since the 1970s, to get more housing built – and in particular more affordable housing for renters and first home buyers.

We are under no illusions. Our current housing situation is decades in the making. It has its roots deeply planted in a belief that unfettered markets will deliver. We believe there is market failure and therefore government must intervene. We know that there is no simple and quick fix. Instead what is required is a commitment to an integrated programme of work that looks to both demand and supply interventions.

This is why hope is not lost.

Around this time last year, economists were predicting 15% price slumps in the housing market. Instead, we’ve seen nationwide house prices increase by nearly 27% in the year to April.

This reflects less on economists’ forecasting abilities and more on New Zealand’s strong economic bounce-back, following the team effort to keep each other safe from Covid-19, government support to keep people and businesses solvent amid the shock of the global pandemic, and persistent, rock-bottom interest rates.

In the last quarter of 2020 as we saw house prices increase, it became obvious more interventions were required beyond the much-needed urban planning overhaul and public housing investment we have already made.

In March we announced our new measures to shift the dial on housing demand and supply, backed up with a large chunk of change; $3.8 billion to enable infrastructure like water pipes and roading for new housing; and $2 billion in borrowing for Kainga Ora to purchase land and get development underway in areas where it has stalled or is way too slow. This is the largest investment of this nature since the 1970s which will provide much needed build-ready land.

And there are some encouraging “green shoots” which show these actions may be starting to tilt the playing field away from housing speculators, and toward first home buyers.

On the demand side, we announced a crackdown on housing speculation by phasing out investors’ ability to claim interest deductions and an extension of the bright line test, so investors have to pay income tax on any profit made when selling a house within 10 years.

Crucially, these changes only apply to existing properties. The last thing we need is investors competing with their grown kids to buy housing. So we’re carving out exclusions for new builds to encourage more investment in new housing, including more affordable housing for first home buyers and renters. The finer design points of this policy are currently being consulted on.

When we investigated what more we could do to encourage supply, beyond our urban planning changes to allow an uplift of housing in urban areas (more on this below), councils and developers made it clear to us a significant part of the market failure to add new housing supply was the lack of ready-to-build land.

So we are investing $3.8 billion in a Housing Acceleration Fund to pay for essential infrastructure like water pipes, roading and flood protection, to get land ready for new housing to be built.

Of this, $350 million is ring-fenced to support Māori housing developments (in addition to $380 million through Budget 2021 for Māori housing).

And this week the billion-dollar contestable part of the fund – the Infrastructure Acceleration Fund – opens up for expressions of interest from councils, iwi and developers who can bring on multiple, affordable new homes.

CoreLogic’s buyer classification data from May also showed a decrease in multiple-property owner activity recently, and an increase in first home buyers. CORELOGIC BUYER CLASSIFICATION DATA. FIGURES BASED ON TRANSFERS OF RECORDS OF TITLE (PREVIOUSLY CALLED CERTIFICATES OF TITLE), NOT PROPERTY SALES.

Record building consents for new dwellings – 42,848 in the year to April 2021 – give even more solid ground for optimism that we are beginning to make some headway on increasing supply. Estimates from Statistics New Zealand released today show the number of new homes consented in the year ended May 2021 is at an all-time high of 43,466. 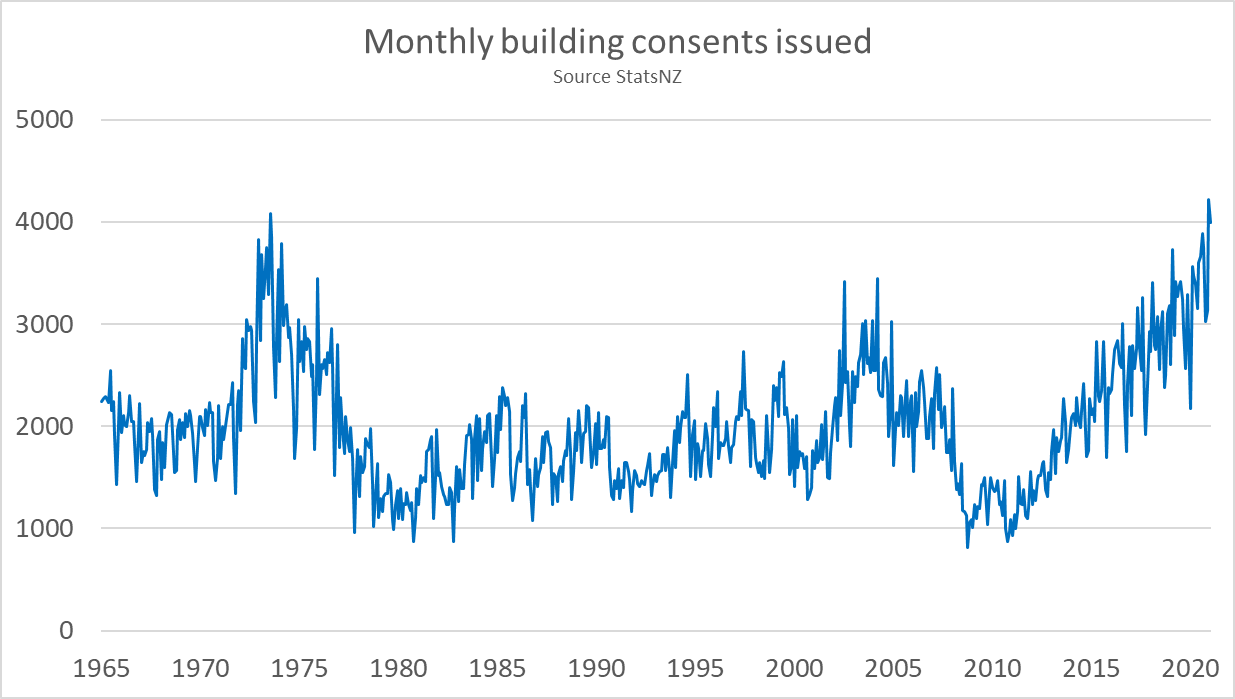 So how did we get into this housing mess?

Bernard Hickey’s column chronicles Reserve Bank warnings about potential disruptive falls in house prices as well as remarks in 2007 by National party leader John Key, who was to become prime minister a year later that “quite simply, not enough houses are being built in New Zealand”.

Cue 2008 and the Global Financial Crisis which resulted in a tightening of investment lending to housing developers, and the building of affordable housing falling off a cliff.

If it seems like that would have been a good time for a government to step up and intervene – say, by underwriting developments to ensure a steady pipeline of affordable housing was being built and critical construction workers would not be lured overseas, especially to Australia – then National did not read the memo.

This housing crisis and lack of new, affordable homes evolved over decades of inaction; the last time central government invested heavily in infrastructure to prepare land for housing was in the 1970s.

A significant part of our revitalised public housing programme, where we are delivering over 18,000 additional public and transitional homes by 2024, is being done through large-scale projects in Auckland such as in Mt Roskill, Northcote and Mangere.

These developments, which are enabling not only public housing but many more affordable and market-rate houses as well, involve significant infrastructure work of the type that the Housing Acceleration Fund will further support.

This government’s first move to fix the housing crisis was to ban foreign speculators from buying homes, followed up with a host of law changes to get more housing built through new capital financing options, and the all-important intensification of urban areas:

The Infrastructure Funding and Financing Act 2020 (the Act) provides opportunities for local councils, Māori and iwi, and developers to partner and deliver infrastructure, free of the council’s debt limits or from charging high upfront costs to developers.

The National Policy Statement – Urban Development (NPS-UD) is probably the most significant piece of planning regulation to open up new opportunities for housing. It requires councils to remove overly restrictive rules and encourage housing intensification in major urban areas so developments can be higher and denser; think multiple dwellings per site in areas where people want to live, close to transport and amenities.

Relevant councils are starting to incorporate the NPS-UD into their planning and we are also looking at how we might be able to speed up implementation of the rules, as we seek to get more new, affordable housing built, much faster.

While National has always campaigned hard on reforming planning rules to free up land supply, we are turning that into reality; reform of the Resource Management Act to simplify planning is under way.

One area to develop for achieving our goal for all New Zealanders to live in warm, healthy, secure housing – whether they own or rent – is the build-to-rent market. New Zealand is an outlier in this regard; other countries in the OECD have well-established models where quality, affordable apartments are managed by professional organisations acting for investors, with security of tenure being a key feature. We are working with developers on how to make this a feature of our housing landscape and will have more to say about this in the coming months.

This government has not only rebuilt the state’s mandate to deliver housing, we have reconstructed its ability to plan, invest and make it possible for housing to be built at scale.

It’s taught us what is possible when we match up the right land in the right place with good plans, and invest in the critical, but costly infrastructure that brings roads to our homes, and water to our taps. We have achieved an enormous amount as we’ve played catch-up with addressing a housing market that has simply not built enough affordable or state houses.

It’s taken many years to get us into this housing crisis and it will take more time to get out of it.

There is no quick fix.

But the steps we have taken will bring about enduring, structural change to the way we plan and build new housing and will remove the boom and bust cycle of housing construction that led to the current problems, and they will make a difference over time.