(CNN)United States Navy commanders face a potential shortfall in their Asia sea power in the coming weeks as tensions simmer with China in the region’s waters.

According to two unnamed US officials, the Japan-based aircraft carrier USS Ronald Reagan is expected to head to the Middle East in the next few days to support US troops’ withdrawal from Afghanistan.
But analysts say the move could leave a gap in US carrier coverage in East Asia at a time when Beijing is turning up the heat over the South China Sea and Taiwan.
China may also point to the US deployment as evidence for its claims that Washington cannot live up to its military commitments in Asia, said Collin Koh, a research fellow at the S. Rajaratnam School of International Studies in Singapore.
“It’ll be delightful fodder for Beijing’s propaganda machine to be certain,” said Koh, who added the US could be without a carrier in Asia for months.
“Amongst other regional governments, there’ll be shared concerns about the ‘hole’ in the US military posture in the region during this carrier absence,” he said. 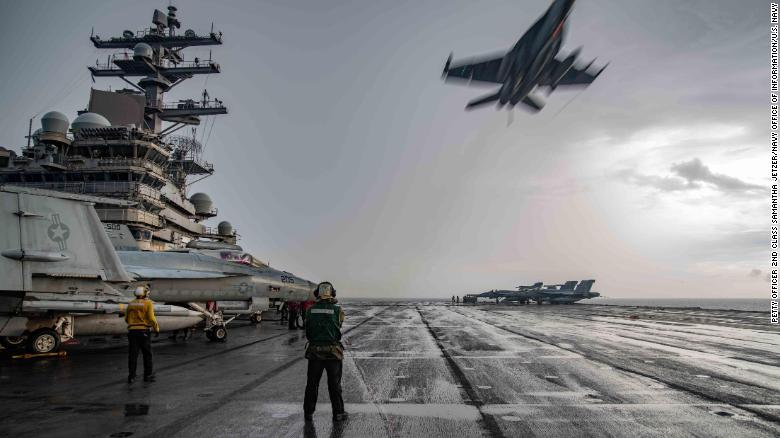 An F/A-18E Super Hornet flies over the flight deck of the carrier USS Ronald Reagan in the South China Sea last year.
Thomas Shugart, a former US Navy officer and adjunct senior fellow with the Center for a New American Security, said leaving a gap in carrier coverage in Asia seems counter to stated US defense priorities.
“Given that our most recent National Defense Strategy indicated a clear prioritization of the military challenge from China over continuing involvement in Central Asia and the Middle East, it is a bit of a surprise to see our only aircraft carrier in the Western Pacific pulled away from that priority theater,” Shugart said.
US Defense Secretary Lloyd Austin could sign the orders for the Reagan’s movement as soon as this week, the US officials said.
Still to be decided is the configuration of how many cruisers and destroyers might accompany the Reagan.
It would replace the USS Dwight D. Eisenhower, which is covering the Afghan mission from the North Arabian Sea on a regular rotation. The US Naval Institute News reports the Eisenhower, on its second deployment in a year, is in need of repairs and will need to leave the region in July.
This replacement schedule could keep a carrier in the Persian Gulf to help defend US troops in Afghanistan at least through the scheduled withdrawal deadline of September 11.

Reagan’s importance to US defense strategy

The Reagan, based out of Yokosuka, Japan, near Tokyo, is the US Navy’s only forward-deployed aircraft carrier. It is the US military’s largest and most visible asset in the Indo-Pacific.
As recently as last summer, the Reagan and the USS Nimitz, were both operating in the region, including holding exercises in the South China Sea. The Nimitz returned to Washington state in March after almost one year at sea.
Earlier this year, the carrier USS Theodore Roosevelt performed maneuvers in the South China Sea, but this week it returned to its homeport in San Diego.
The nuclear-powered, 1,100-foot long, 97,000-ton US Navy aircraft carriers each have an air wing of 75 aircraft, including F/A-18 fighter jets.
The US Navy’s 7th Fleet, based in Japan, says having the Reagan based in the Indo-Pacific cuts an average of 17 days transit time to get to contingencies in the region compared to carriers coming from the continental US.
China, meanwhile, has two aircraft carriers, the Qingdao-based Liaoning and the Shandong, which is homeported at the Sanya naval base on the island of Hainan on the northern edge of the South China Sea.
China claims nearly all of the 1.3 million-square-mile South China Sea as its sovereign territory, despite claims from Vietnam, the Philippines, Brunei, Malaysia and Taiwan to portions of it.
People’s Liberation Army forces have in recent months been on frequent maneuvers in the South China Sea. Earlier this week the PLA said its warplanes “rained down thousands of munitions at maritime targets” as part of a regular exercise to demonstrate combat readiness, according to a report from the state-run Global Times.
China has also been highly critical of the presence of US warships in the South China Sea, saying such US Navy deployments exacerbate tensions and threaten peace and stability in the region. 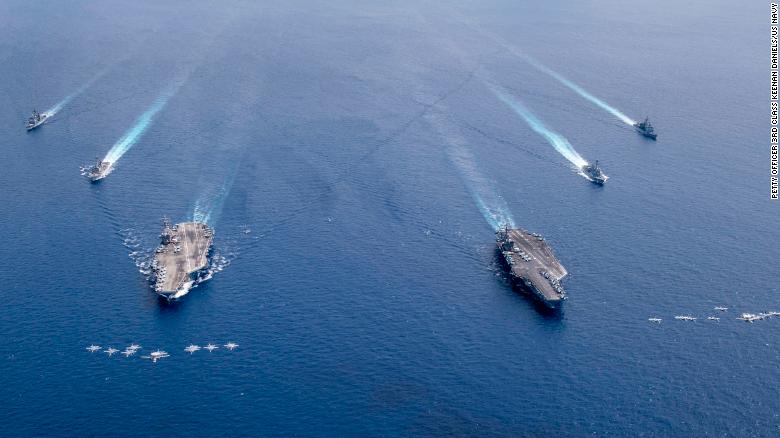 How the US may make up for the Reagan’s absence

Despite the appearance of losing a carrier in Asia, the US has other assets it can call on, said Carl Schuster, former chief director of operations at the US Pacific Command’s Joint Intelligence Center.
Schuster says a US amphibious assault ship based in Japan carries F-35 fighters and could fill in temporarily in Asian waters.
And there are other ways to project power, he said.
“I suspect the Air Force will send bombers through the South China Sea while the Reagan is away. It won’t have the same presence as a carrier, but it will send the same political signal,” Schuster said.
The Reagan’s absence from East Asia’s waters could also coincide with a visit to the region of a UK Royal Navy carrier strike group led by Britain’s largest warship, the carrier HMS Queen Elizabeth.
The UK carrier, which is carrying US Marine Corps F-35 fighters as well as British versions of the same jets, left England last weekend in a flotilla that included a US guided-missile destroyer. It is expected to transit the South China Sea sometime in late summer on its way to Japan.
“Given that the entire (UK) carrier strike group is also augmented with American and Dutch assets and personnel, it would be a useful tool for signaling US allied solidarity in the region while there’s no (US) carrier,” said Koh, the Singapore-based researcher.
The Reagan recently departed its Japanese homeport to conduct crew qualifications at sea. Former US Navy officer Shugart said it would be helpful if the Reagan returned to Asian waters as soon as possible after its deployment to the Middle East
“Hopefully, this (deployment) will be for a limited time period as the US withdrawal from Afghanistan proceeds, and once it is complete the Ronald Reagan strike group can return its focus to contending with the truly remarkable expansion of Chinese naval and air power that has been underway in recent years,” he said.
Pentagon spokesman John Kirby said Wednesday no information would be given about any planned deployments.
“We don’t talk about potential future operations. We certainly don’t talk about potential ship movements in advance,” he said.
Post Views: 249
info@thenationalpolicy.com2021-05-28T00:18:42+00:00May 28th, 2021|Analysis|0 Comments