Covid-19: Vaccinations for wider NZ public pushed back by weeks

Home/News/Covid-19: Vaccinations for wider NZ public pushed back by weeks
Previous Next

Covid-19: Vaccinations for wider NZ public pushed back by weeks

The roll-out of the Covid-19 vaccine for the wider New Zealand population has been moved back by weeks.

The Ministry of Health has changed the timeline on when the general public will be vaccinated from “from July” to “from the end of July”.

In the latest update from the government this afternoon, Covid-19 Minister Chris Hipkins says he would not read too much into the wording change, and says the government was “endeavouring” to start vaccinating group four in July.

Hipkins said Pfizer had not given the government its delivery schedule for the vaccine from July onwards, but said it has committed to delivering all the vaccines by the end of September.

Hipkins said all DHBs have started rolling out the vaccine for Group 3 – over-65s, those with underlying health conditions – but the rollout is being affected by vaccine supply. He said further vaccinations of the group will require more supply of the vaccines, which won’t be until July.”Everybody in that group will get more information, they don’t need to do anything more until then.”

Hipkins said the health authorities always envisioned there would be some overlap between groups, and that supply had always been a big factor on how fast the rollout could move.

He said that when Pfizer gave a delivery schedule, they stuck to it.

There have now been 562,149 doses of the vaccine given in New Zealand, with 85,000 receiving a vaccination in the past week. 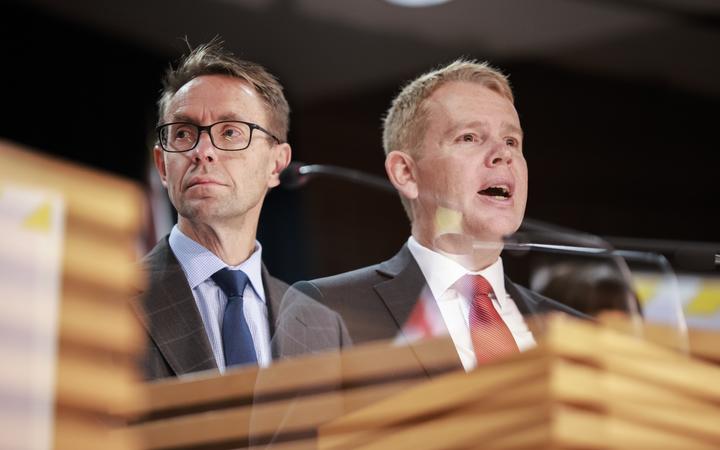 He said saliva testing was an important step in mandatory testing and border workers would be able to choose more frequent saliva testing as opposed to their weekly nasal swab.

Some workers have had more than 100 nasal swabs.

“The ministry is satisfied that the combination of the two tests – the saliva test and nasal test – along with frontline border workers being nearly fully vaccinated … will provide us with assurances that we need at the border to keep Covid-19 out of the community.

“Today’s announcement means workers who have to be tested once a week because they are in important roles where the risk is a little higher, they can move to incorporate saliva testing to reduce the frequency of nasal swabs.”

That would start from June, he says.

Recent Ministry of Health research showed the number of New Zealanders likely to get a Covid-19 vaccine is growing. The survey done in April shows 77 percent of people are likely to get the jab, up 8 percent from the March results.

‘By early July that stockpile will have gone’

Hipkins told Checkpoint there were 300,000 doses of the Pfizer vaccine in freezers, and more jabs were being delivered on a weekly basis than the country was receiving.

For example, about 80,000-90,000 doses were being administered a week, with just about 40,000 set to arrive in the country early next week.”We expect by early July that stockpile will have gone. Then it’s really a question of getting confirmation from Pfizer, which we hope we’ll get in the next week or so, of what we’ll get in terms of delivery for July – what quantities and when.”

He said no-one who was awaiting delivery from Pfizer in July had their schedule confirmed yet.

A decision was made back in January to increase the Pfizer order and not proceed with orders from others, like Astrazeneca, Jannssen or Novavax, this year, he said.

Pfizer was doing a global allocation, and they had committed contractually to giving the extra vaccines throughout the third quarter, he said.

“They’re still indicating they’re going to do that but we don’t know the week-by-week breakdown of exactly how many are going to be arriving each week.”

New Zealand’s Pfizer vaccines have been manufactured in Belgium.

The country’s plan B for any supply issues was to look at the advance purchase agreements with the other vaccines, he said.

“At the moment, we’re still completely focused on plan A and I have heard nothing from Pfizer and from the people who have been negotiating with Pfizer that would give me concern that they’re not going to be delivering the vaccines we purchased from them.”

However, no other vaccine has been approved by MedSafe yet. Hipkins said he expected a Medsafe decision on the other vaccines within a month.