Analysis – On election night 2020 the sense of triumph around Labour was palpable, the grins as wide as the Waikato. Today’s Budget is why. After years of compromise, contradiction and incompetence, this is the sort of Budget Labour party MPs and members have wanted to deliver. Labour’s majority win in last year’s election that allowed it to govern alone means Budget 2021 is dyed the deepest red. 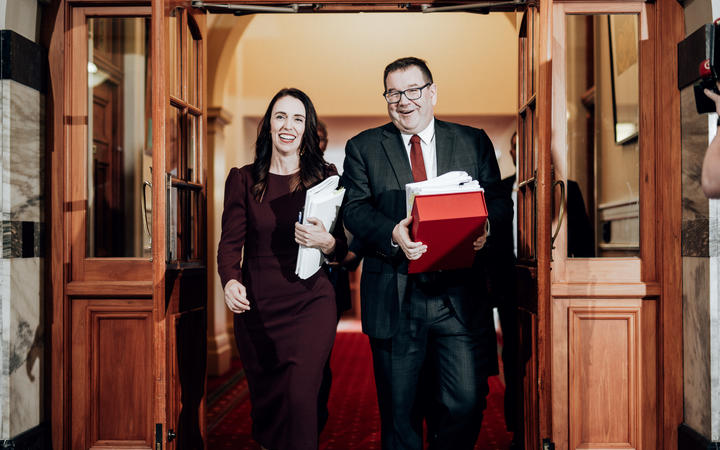 The headline announcement of benefit increases is, for once, a genuinely once-in-a-generation move. On top of the $25/week increases under National and then the previous Labour-led government, this increase of “main benefit rates” of between $32 and $55 by April 2022 is a significant reset of what New Zealanders can expect from the welfare state.

For Jacinda Ardern and Grant Robertson, today’s Budget is reward for all those long nights at work, the time away from home, the humiliations of political faux pas and the poisonous leadership battles over the years. The ability to deliver this suite of policies is the reason Ardern flipped and flopped over a capital gains tax, wealth tax and changes to super. Politics is about compromise, and those were just some of the dead rats swallowed so that you can finally, finally get to feast on all these tasty treats.

A cynic might add that “revenge is a dish best served cold”, and there will have been a petty glee in the back of many Labour MPs’ minds this afternoon when Robertson opened his speech. But in truth this is a healthy, natural pendulum of swing politics and something Robertson in particular has worked towards since he was a teenager. It’s a reminder why politics still matters and is still worth the fuss.

Today, the middle-aged Robertson – greyer, wiser – finally got to speak back to one of the key issues that drove his young adult self into politics all those years ago.

“This Budget is also set against the Budget delivered 30 years ago this year, the so-called ‘Mother of All Budgets’. It was the Budget that finalised the benefit cuts, which introduced the idea of hospitals being replaced by Crown Health Enterprises, that set in motion interest-bearing student loans and that welcomed the passing of the Employment Contracts Act.

“On this 30th anniversary of that Budget, our government is undoing some of the damage done all those decades ago. In recent weeks, we have released the details of Fair Pay Agreements to lift wages and conditions across the industries where some of our lowest paid people work. Today, we address the most inequitable of the changes made 30 years ago. We will restore dignity and hope for some of the lowest income New Zealanders by righting the wrong of those benefit cuts by boosting main benefit rates by up to $55 per week.”

Take that Ruth. This is Labour fighting back, Roger.

And it’s not only welfare. There’s money for students. More for training and trains. More for medicines via Pharmac. More money for housing (specifically ‘Māori housing’, take that Don Brash). For crying out loud, there’s even $85 million for more work at the emblematic Hillside Workshops in Dunedin.

Oh yes, this Budget is just the latest act in the long-running political play that dates back to 1984. It’s a rejoinder to all those years of arguments that New Zealand needed to choose efficiency, follow the market, that There Is No Alternative (TINA). This is those who remained in Labour through and after the Rogernomics years saying ‘this is what the Labour Party is’.

Yes, you’re right to say ‘taihoa’; this is still the Ardern-Robertson government we’re talking about here. I don’t mean to suggest this is a radical riposte. Labour makes a fine distinction about ‘main benefits’, it spreads the benefit increase over two years, it still points to seeing this budget as one in three this term that will aim to honour its election promises.

Ardern’s own poverty targets are still far off. For all that, this kicks back against Rogernomics, it still carries the mark of caution that era branded onto our current MPs. The pendulum swing I’m talking about comes in the context of this incremental era of political management.

It’s always fascinating to think of the politics needed to get here.

Many on the Right will argue that Robertson and co only have the choices available to them today because of the hard decisions made 30 years ago. That our ability to spend down is in large part due to our willingness to cut then.

But it’s also worth noting this most Labour of days might never had come without Andrew Little’s and Metiria Turei’s resignations in 2017, without Winston Peters’ choice, without Ardern’s bold first steps in leadership and, most of all, without a global pandemic and Labour’s decision to “go hard, go early”. As I wrote after the election, Ardern hugged New Zealand close during Covid-19 and on election day New Zealanders hugged her back.

This is the result of all that. A significant swing of the pendulum, a long-awaited riposte to the 1991 Budget and a step-change for that most precious of New Zealand taonga, the welfare state.