The latest violence between Israel and Palestinians will end when both sides can declare victory. But it will be no more than a truce

Home/Analysis/The latest violence between Israel and Palestinians will end when both sides can declare victory. But it will be no more than a truce
Previous Next

The latest violence between Israel and Palestinians will end when both sides can declare victory. But it will be no more than a truce

(CNN)The current explosion of violence between Palestinians and the state of Israel is yet to inflict as many casualties as the devastating 2014 Gaza conflict, but in many ways is a bleaker and more foreboding episode. Confrontation is not confined to aerial bombardment and rocket fire over Gaza and southern Israel but has spread to the streets of Israeli towns, to neighborhoods of Jerusalem and across the West Bank.
Ominously it is fueled by deepening polarization, where the voices of militancy on both sides are the loudest, and those calling for coexistence are scarcely a whisper.
On the lawn of the White House on September 13, 1993, then Israeli Prime Minister Yitzhak Rabin stood alongside PLO leader Yasser Arafat and declared: “We who have fought against you the Palestinians, we say to you today in a loud and clear voice, enough of blood and tears, enough.” 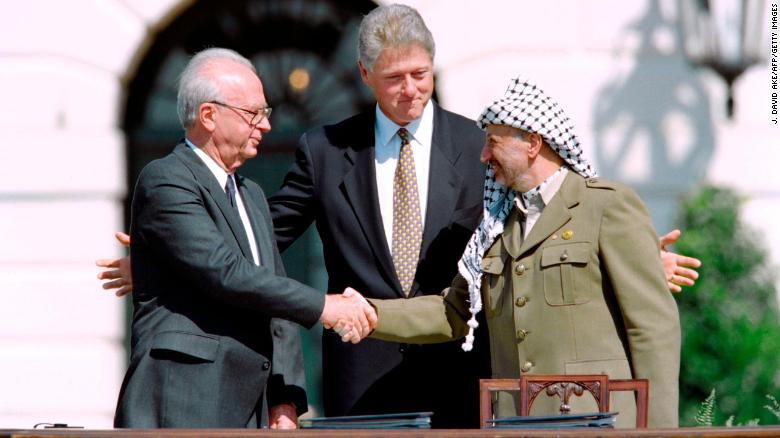 It was the closest the two sides have come to breaking a cycle of violence that is now a century old. The holy grail of a two-state solution seemed within reach. If that moment in 1993 was the high water mark of dialogue, the region now seems trapped in a vortex of enmity — while the international community falls back on calls for “restraint” but is bereft of fresh ideas to attack the roots of the conflict.
Perhaps the most alarming feature this time round is that Israeli towns with Arab populations, like Lod and Haifa, have been sucked into this spiral. Arabs make up about 20% of the population of Israel proper.
Even in 2014, and during the Palestinian intifadas, the peace largely held in these towns. But in the last week Palestinian and Jewish youth have fought street battles, places of worship and homes have been torched, curfews have been imposed.
“We have completely lost control of the city, and the streets are witnessing a civil war between Arabs and Jews,” said the mayor of Lod Yair Revivo last Wednesday.

The daily discrimination felt by many Arabs living in Israel is heaped on other grievances that are part of this latest spasm of conflict. It began with attempts by Jewish nationalists to have Palestinian families evicted from their homes in the Sheikh Jarrah neighborhood of East Jerusalem — and was fueled by clashes between police and Palestinians around the Haram al Sharif/Temple Mount during Ramadan, always an incendiary time of year.
Enter Hamas — and notably not the Palestinian Authority — setting itself up as the defender of all Palestinians — demanding Israel withdraw its forces from the al Aqsa mosque and Sheikh Jarrah or pay a “heavy price.”
And so the extremes hold sway: confrontation is the only currency.
In some ways this suits both Israeli Prime Minister Benjamin Netanyahu and Hamas. Through confrontation they reinforce their respective bases and hollow out voices of moderation. Hamas can claim it is the true representative of Palestinians — just as the aging President of the Palestinian Authority, Mahmoud Abbas, postpones elections. Were negotiations — promoted by the international community — to restart, Hamas would be the loser as its modus vivendi is armed resistance to the Jewish state.
Emma Ashford, from the New American Engagement Initiative think tank, argues that the “recent cancellation of Palestinian elections means Hamas is desperate for a chance to prove itself, hence the rocket attacks and its attempt to tie its cause more closely to what’s happening in East Jerusalem.”
For his part, Netanyahu depends on ultra-nationalists to remain in office and has successfully moved the terms of debate during his long tenure as Prime Minister. Two years ago his more centrist rival Benny Gantz promised to “strengthen the settlement blocs and Golan [Heights], where we won’t leave ever. The Jordan valley will be our border, but we won’t let millions of Palestinians living beyond the fence endanger our identity as a Jewish state.” The once-mighty left wing of Israeli politics now seems bereft of energy and ideas.
Perversely, to some analysts, Netanyahu needs Hamas. The alternatives are reassuming control over the teeming open prison that is Gaza, at enormous cost — or seeing even more militant groups such as Islamic Jihad or ISIS-inspired Salafi groups — gain sway among a young population radicalized by every chapter of violence.
Beyond the political opportunism, the cause of the conflict — what it means to belong — grows ever deeper roots. In 2018, Netanyahu’s government enacted a law that enshrined the right of national self-determination as “unique to the Jewish people” — not all citizens of Israel. It demoted Arabic from an official language to one with “special status.”
It has also promoted further Jewish settlement in the occupied West Bank. As of last year, more than 440,000 Jews lived in the West Bank, according to Israeli human rights group Peace Now. The current attempts to evict Palestinian families in East Jerusalem fit this pattern.
Exactly 100 years ago this month, long before the state of Israel came into existence, riots broke out in what was then Jaffa. Dozens of Palestinians and Jews were killed. A British commission of inquiry (the UK controlled Palestine and was given a League of Nations mandate to administer the territory in 1922) concluded the riots stemmed from “a feeling among the Arabs of discontent with, and hostility to, the Jews, due to political and economic causes, and connected with Jewish immigration.” 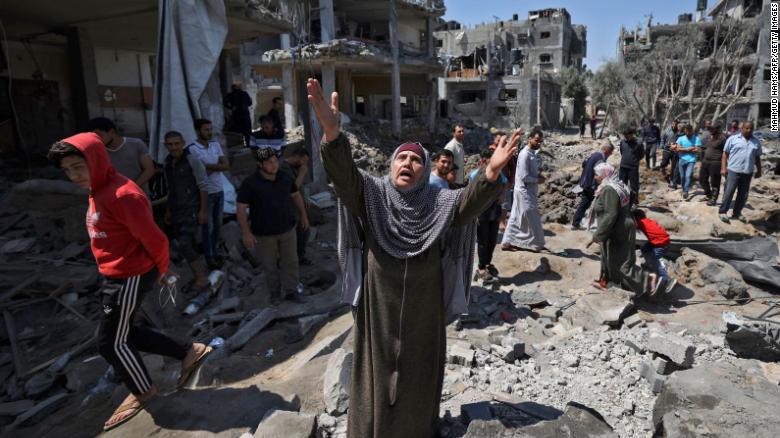 A Palestinian woman reacts as people assess the damage caused by Israeli air strikes in Beit Hanun, Gaza, on Friday.

Those underlying causes have never been erased, through 1948, when the Jewish state was born in what Palestinians call al-Nakba, or “the catastrophe;” the war of 1967 when Israel took control of the West Bank, East Jerusalem and Gaza; the Palestinian uprisings at the turn of this century and the Gaza conflicts since.
As CNN’s Ben Wedeman trenchantly observed in Bethlehem last week: “The young Palestinians throwing rocks, their fathers probably threw rocks too. And these Israeli soldiers firing off tear gas, their fathers probably did the same.”
The two-state solution that was the bedrock of international diplomacy and enshrined by UN resolutions has become less and less viable as the West Bank has morphed into a patchwork of Palestinian towns and Jewish settlement, where occupation has begun to look like annexation. An in-depth report for the Carnegie Endowment for International Peace last month described a two-state solution as the “scaffolding [that] sustains occupation and is structurally incapable of delivering peace and human security.”
A one-state solution that would include full citizenry for the inhabitants of West Bank and Gaza is demographic poison to many Israelis and inconceivable in the current atmosphere. 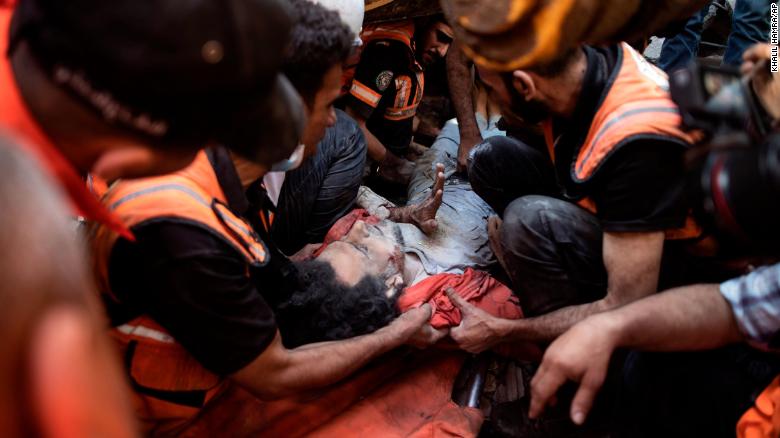 Photos: Violence escalates after clashes in JerusalemPalestinian rescuers pull a survivor from the rubble of a building that was destroyed by an Israeli airstrike in Gaza on May 16.

This cycle, like that in 2014, will likely be ended when both sides feel they can claim “victory” despite the destruction and the deaths of civilians, and when Egypt and the United States can fashion the terms of a truce. But it will be no more than a truce.
After the 2014 conflict, Hamas set about rebuilding its inventory of
rockets and its tunnel complexes while tightening its grip on Gaza. It is difficult to see anything other than this process repeating itself.
In the words of Martin Indyk, who has decades of experience in the Middle East as a US diplomat, “the Biden administration’s approach so far suggests that Washington will be comfortable accepting this unhappy ending.”
Post Views: 181
info@thenationalpolicy.com2021-05-17T01:01:54+00:00May 16th, 2021|Analysis|0 Comments