New Zealanders in India ‘just want to get home’

New Zealanders in India ‘just want to get home’

New Zealanders stuck in India are desperate for help, as the country experiences a devastating second wave of Covid-19 cases. 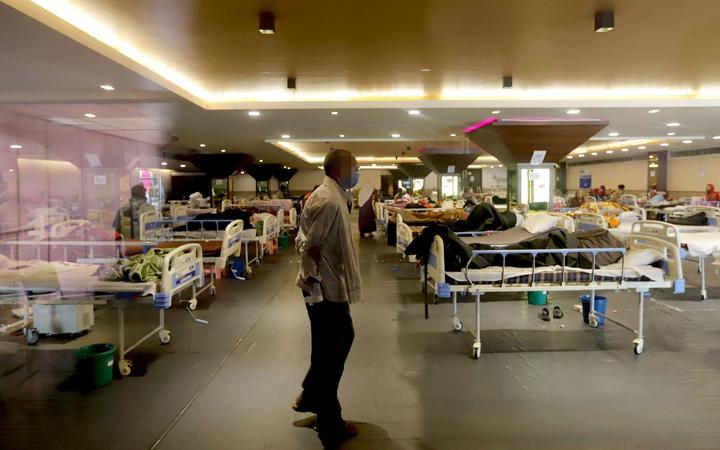 Patients take a stroll at a quarantine centre for Covid-19 coronavirus infected patients at a banquet hall that was converted into an isolation centre to handle the rising cases of infection in New Delhi. Photo: AFP

India reported more than 350,000 daily cases on Monday, and more than 2800 deaths, with overcrowded hospitals running low on supplies.

New Zealander Kiri Tepana moved to India just over a year ago when her husband was denied a visa to stay in New Zealand.

She’s isolating at home with him and their two daughters in a small village in Punjab, and said the latest wave of Covid-19 cases was scary.

“Medical care is absolutely hopeless,” she said, adding that the nearest hospital was a three-hour drive, and treatment was costly.

Tepana and her husband have been together for four years, but they’ve had trouble convincing Immigration New Zealand they are in a genuine relationship.

If her husband does not get a visa soon, Tepana and her daughters might have to leave him behind in India, she said.

Not everyone will have that option though.

India along with Pakistan, Brazil and Papua New Guinea is on New Zealand’s new “high risk” list meaning only citizens, their parents, partners and children are allowed into New Zealand. Flights from India have been suspended for the past two weeks as part of a temporary ban.

That’s put Jyothi Vaidyanathan’s plan on ice – having only recently secured permanent residency for herself and her 10-year-old son, who are stuck in Kerala.

“The situation is bad over here. Day by day it is actually getting worse. Today I got the news that the class teacher of my son has tested positive, and won’t be coming to school.” 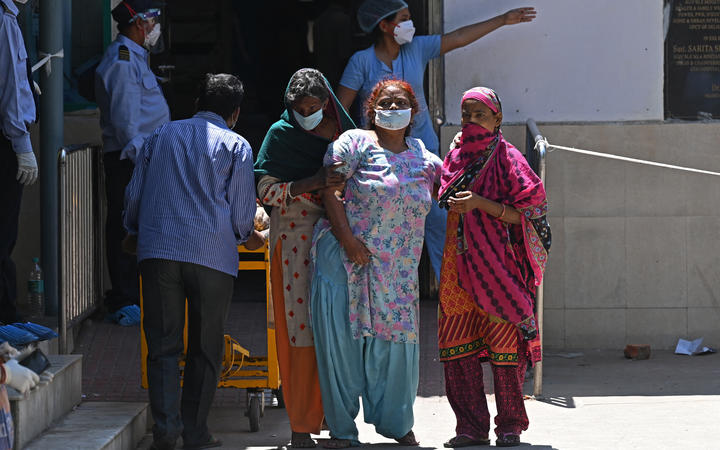 A Covid-19 coronavirus patient is helped by her relatives as she leaves a hospital in New Delhi on April 24. Photo: AFP

Her husband has been working in Auckland for the past three years, and Vaidyanathan said being apart was painful for and her son.

He hoped that government help, including medical equipment or vaccines, could be provided.

Ministry of Foreign Affairs and Trade said New Zealand stood ready to respond to any requests for support from India.

Call for under 16s to be vaccinated

Te Pūnaha Matatini principal investigator and University of Canterbury professor Michael Plank said the country was still vulnerable at the border, and the pressure was on the vaccine rollout.

He told Morning Report there were signs that cases in India were slowing down slightly, but it was too early to say if the infection rate would fall.

Plank said before the temporary travel suspension was brought in, there were about 15 percent of arrivals from India testing positive.

“When travel does resume and when people start coming back from India, we should be prepared to see quite a high percentage of arrivals testing positive.”

He said introducing a category of high-risk countries was a good and “pragmatic move” by the government to reduce the number of positive cases in MIQ facilities.

As for the vaccination programme, a good uptake was key to herd immunity, Plank said.

“Models are increasingly showing we are unlikely to be able to reach herd immunity without vaccinating under 16s. The vaccines currently are approved for use in over 16s in New Zealand.”

He said trials in under 16s were showing promising results.

But even if the vaccines were to be approved for under 16s in New Zealand, it would not be until later this year that that group would be inoculated.