A former long-term Security Intelligence Service (NZSIS) officer is running private intelligence operations for the controversial private investigation company Thompson and Clark. This includes the tracking and monitoring of ex-members of the Exclusive Brethren as reported by Radio New Zealand yesterday.

The former intelligence officer, known only by his first name Gerry, uses skills and surveillance techniques learned while working for over thirty years for the NZSIS to assist Thompson and Clark’s private clients. This includes covert surveillance teams, tailing cars and watching houses, photographing people in public places, and extensive monitoring of social media. Covert car tracking devices have also been used.

RNZ reported that Thompson and Clark staff have conducted many hundreds of hours of active surveillance against past Exclusive Brethren members in the past two years, assisting the Brethren leadership to shut down criticism of the cult-like organisation.

Company emails released under the Official Information Act (OIA) reveal the existence of a Thompson and Clark “collection manager”, in charge of surveillance and other intelligence gathering.

In one email the collection manager is identified as “Gerry.” He heads the company’s intelligence “Fusion Centre”, overseeing “covert surveillance” and sending their clients “threat assessments” and “situation reports” on target members of the public — all language and methods imported from intelligence agencies.

The website of an apparently unrelated company called Risk Management Services Limited – but with ownership traceable to Thompson and Clark principal Gavin Clark – contains a bio for this staff member Gerry. It reveals that:

Security analyst Dr Paul Buchanan, from 36th Parallel, believes it is wrong that former SIS agents are free to use their skills in the service of private operators who don’t have the same regulatory or ethical constraints as the public sector.

“I believe that there should be tight regulations on what former intelligence officers can do once they leave the services, including a moratorium on working for private intelligence companies or on matters unrelated to physical security threats…. The bottom line is that there should be full review and reform of the regulatory framework, [moving to one] that explicitly prohibits construing or designating lawful activities as threats.”

It is not unlawful for former NZSIS officers to move to new jobs after they leave the Service. 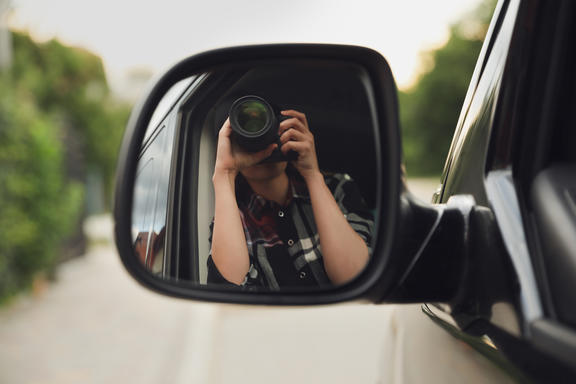 A generic image of a private investigator in a car. Photo: 123rf

Radio New Zealand asked NZSIS director Rebecca Kitteridge if she knew the former NZSIS officer Gerry was employed by Gavin Clark to spy on citizens such as the ex-Exclusive Brethren members; and if she approved of a former senior agent using spy methods against community groups for a company like Thompson and Clark. She did not answer.

A written statement from the SIS said “NZSIS staff gain a broad range of skills and experience which can be applied to other career opportunities. However neither the legislation, nor the NZSIS can dictate the future employment choices staff make when they leave us.”

Radio New Zealand wrote to Kitteridge under the Official Information Act about a Thompson and Clark (TCIL) “collection manager” called Gerry running intelligence operations for the company and asked about his links with the NZSIS. Were NZSIS staff “aware of any TCIL staff member whose first name is Gerry and, if so, what is the link to these staff?” Kitteridge replied that she “could neither confirm nor deny the existence or non-existence of this information.”

The former NZSIS officer was involved heavily in the surveillance conducted for the Exclusive Brethren leadership. Paul Buchanan believes “the case of the Exclusive Brethren chasing after ex-members, clearly that was for purposes of intimidation and harassment, and that strikes me as unethical in the extreme. They’re law abiding citizens, doing nothing wrong, they’ve just annoyed the church leaders who apparently have a lot of money to make things miserable for those who have defected. I don’t think private investigators should be involved in that intimidatory type of activity.”

“Surveilling law abiding people in order to uncover dirt or harass them is wrong, full stop, in my opinion, especially when there is no security issue involved.”

Thompson and Clark came to national prominence in 2017-18 when the company was caught spying on Greenpeace and then found to have secretly monitored meetings of Christchurch earthquake insurance claimants on behalf of the government-owned Southern Response. The subsequent SSC inquiry wrote: “Of particular significance, the Thompson and Clark contractor engaged on behalf of Southern Response attended and recorded several meetings described as ‘claimants only’ or ’strictly claimants only’.

Reporter John Campbell discussed this contractor in a TVNZ article and asked “who was that person?” The answer appears to be: it was the Thompson and Clark collection manager and long-term NZSIS officer, Gerry.

Thompson and Clark invoices released by Southern Response show that the contractor flew from Auckland to Christchurch for each claimant-only meeting and also met with Southern Response staff while he was there. The invoices called him “collections”, a reference to the collection manager.

Thompson and Clark director Gavin Clark told RNZ by email that “The Police advised Thompson & Clark that it found no evidence of any criminal offending by either the company or its contractor regarding work done for Southern Response.” 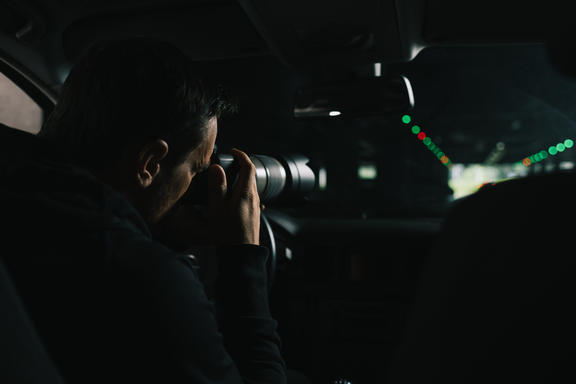 A generic image of a person using a camera for investigative work. Photo: 123rf

Before setting up Thompson and Clark in 2003, director Gavin Clark previously worked in a police intelligence unit at Harlech House in Auckland, monitoring protest groups. . After leaving the police he established the private investigation company, offering the anti-protest group monitoring to paying clients.

Nick Thompson, the other half of Thompson and Clark, resigned as director in early 2019 following the damning SCC inquiry report. However he has continued working with Clark on a side business providing surveillance cameras to clients through the companies Cyclops Monitoring Limited and Eyela Limited, and a surveillance system monitoring service through the company Omnes Videntes Limited (Omnes Videntes is Latin for All Seeing).

The Risk Management Services website describes other Thompson and Clark staff as well: Glenn, who is former Auckland police detective Glenn Gray, who has worked for Thompson and Clark for at least five years; and Matt, who is Matt McLaughlin providing technical support for the private intelligence operations. According to a July 2016 email released under the OIA, Thompson and Clark employed a technician who was “an ex-police officer with 30 years Technical Support Unit (TSU) experience”. The TSU is a specialised police surveillance team used for bugging houses and phones. This may be the technician McLaughlin.

The RMS website also provides more details about the former NZSIS officer. It says he has “has 10 years experience in the private security sector as a private investigator,” i.e. Thompson and Clark. “He’s licensed with a certificate of authority for Private Investigation and Security Consultant and is a Member of the Criminal Bar Association of New Zealand, the Arbitrators and Mediators Institute of New Zealand, and the New Zealand Institute of Intelligence Professionals.”