Sweden has highest new Covid cases per person in Europe

by Jon Henley, The Guardian

Sweden has highest new Covid cases per person in Europe 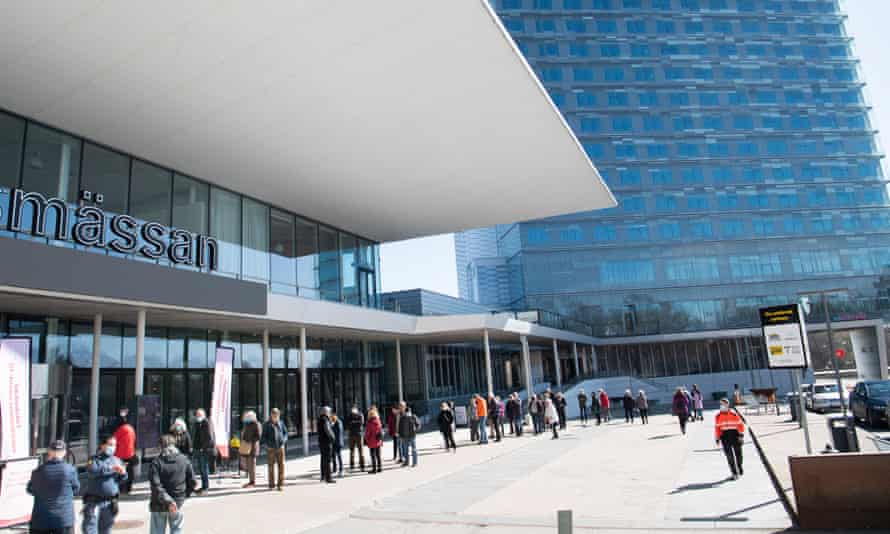 People queue for their vaccine against Covid-19 at the Stockholmsmässan centre in Stockholm, Sweden.Photograph: Fredrik Sandberg/EPA

Sweden has reported Europe’s highest number of new coronavirus infections per head over the past week and has more patients in intensive care than at any time since the pandemic’s first wave.

The Scandinavian country, which has opted against strict lockdowns but gradually ratcheted up its still mostly voluntary restrictions, has a seven-day average of 625 new infections per million people, according to ourworldindata.org.

According to the Swedish intensive care registry, 392 people were being treated in the country’s intensive care units on Monday, more than the second-wave peak of 389 in January but still lower than the 558 patients in ICUs in spring 2020.

However, while both infections and ICU patients have surged, Sweden’s death toll has so far not risen so sharply, a trend the national health agency said was due to many of the most vulnerable, particularly care home residents, now being vaccinated.

The Social Democrat-led government of the prime minister, Stefan Löfven, postponed a planned easing of some restrictions in late March until at least 3 May, but has insisted tougher measures are not yet needed to bring the latest surge under control.

The Swedish public had “really changed its behaviour and daily life is, to a very great extent, already very restricted”, said the health minister, Lena Hallengren.

The government had planned to ease some rules, including raising the limit on the number of visitors to amusement parks, concerts and football matches, after the Easter break, but was advised against doing so yet by the public health agency.

Non-essential shops have remained open in Sweden, although the government has limited customer numbers, and bars and restaurants have continued to serve, albeit with increasingly tough restrictions on opening hours and alcohol sales.

Restrictions have been steadily tightened on public gatherings but schools have mostly stayed open, although rules vary regionally. Hallengren said last week the government had brought in the measures it believed necessary.

“Whether that has been sufficient, is not a judgment that I can sit here and make,” she told MPs last week. Hallengren said the policy had been to “put lives and health first and protect the healthcare system as much as we can”.

But Hallengren said the government had also tried to “secure society’s other important functions. Once this is over, society should be able to continue to function.” The aim was not to affect people’s private lives “overly much”, she said.

Surveys show Swedes have been paying less attention to recommendations in recent weeks, prompting the country’s chief epidemiologist, Anders Tegnell, to call for greater discipline. “What’s needed is for people to observe the rules we have,” he said.

The country of 10 million people has seen more than 13,000 Covid-related deaths, giving it a death rate per million of nearly 1,350 – many times higher than that of its Nordic neighbours, but lower than in several European countries that opted for lockdowns.

An analysis of official data from several countries showed last month that the increase in excess mortality – a measure of how many more deaths a country has seen than normal – was smaller in Sweden in 2020 than in most European countries.

Infectious disease experts have said the results should not be seen as evidence that lockdowns were unnecessary, but acknowledged they may indicate Sweden’s overall stance on fighting the pandemic may have some aspects worth studying.

Preliminary data from the EU statistics agency, Eurostat, compiled by the Reuters news agency showed Sweden had 7.7% more deaths in 2020 than its average for the previous four years, a lower figure than in 21 of the 30 countries surveyed.

Spain and Belgium, which opted for repeated strict lockdowns, had so-called excess mortality of 18.1% and 16.2% respectively.