Manila on Wednesday called on China to “immediately withdraw” the vessels, which are inside its exclusive economic zone (EEZ) at the reef in the Spratly Islands, about 320km (175 nautical miles) west of the Philippine province of Palawan. Sovereignty over all or some of the islands is claimed by China, Taiwan, Vietnam, the Philippines, Brunei and Malaysia.

A report released last Friday by Simularity, a US-based geospatial tech company that monitors the South China Sea, showed vessels had been at the reef – also called Niu’e Jiao in China and Julian Filipe Reef in the Philippines – since December. The Philippines says the ships are maritime militia, while China insists they are civilian fishing boats.

Jay Batongbacal, associate professor at the University of the Philippines College of Law, said Wang and Locsin would each want assurances from their meeting. 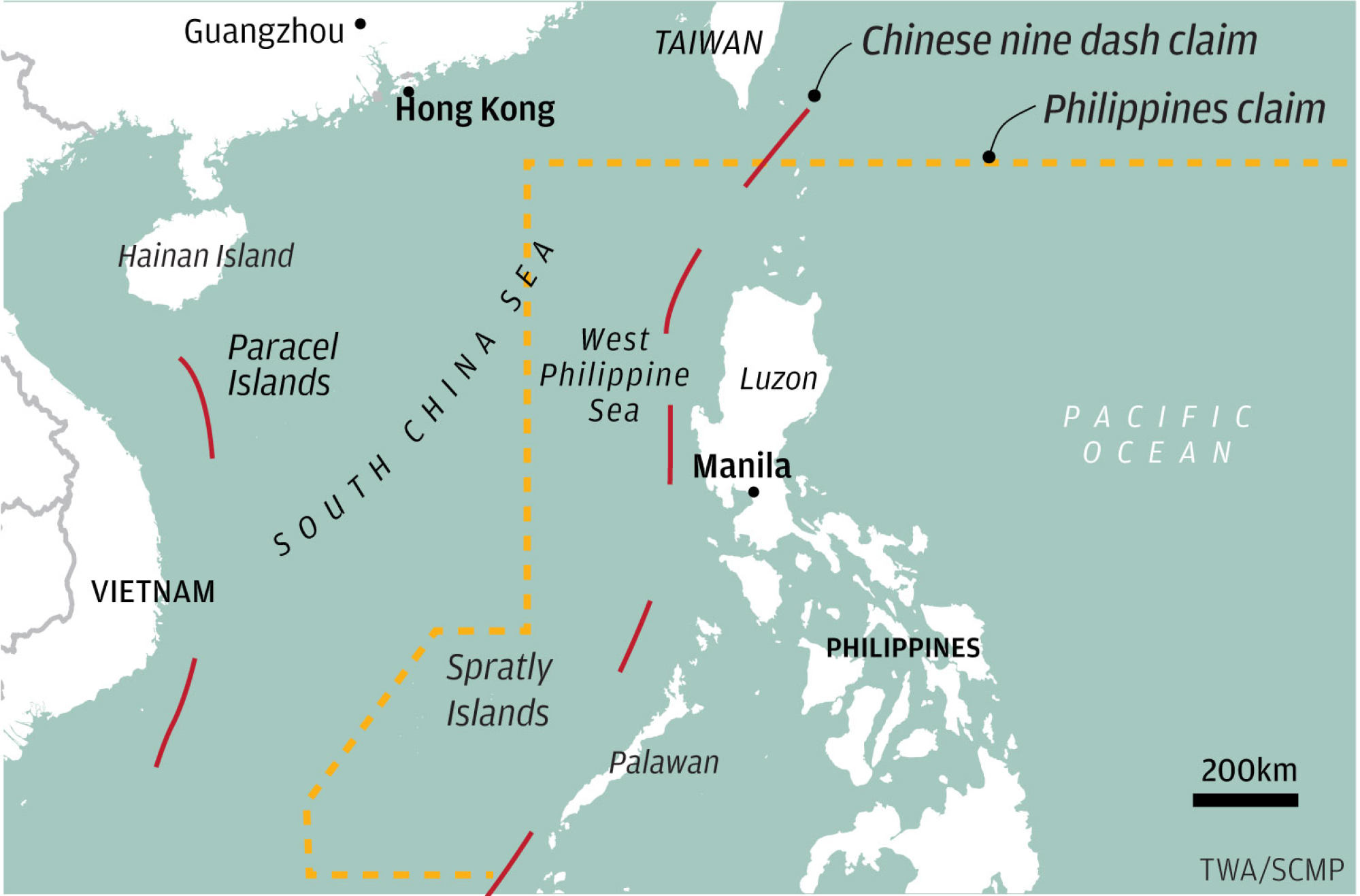 China and the Philippines have overlapping claims in the South China Sea. Map: TWA/SCMP

“This was the largest ever concentration of Chinese vessels found in the Philippine EEZ, anchored and lashed together next to an unoccupied and submerged coral reef,” Batongbacal said. “Philippine government officials are worried that this signals yet another mode of establishment of a continuous presence, tantamount to a new occupation, of a feature in the West Philippine Sea by Chinese maritime militia.

“China wants to put this issue to bed as soon as possible because it contrasts sharply with the image it is trying to project, of being a dependable and helpful regional partner.

“Wang Yi would probably want assurances from Locsin that the issue will be resolved as quickly and quietly as possible, so that more favourable interactions between the two countries, such as Covid-19 cooperation, will be highlighted. Locsin, on the other hand, needs to secure a credible effort on China’s part to withdraw its fleet.”

Locsin filed a protest with the Chinese embassy on March 21. The Philippine military said on Tuesday that one of its aircraft received warnings from the Chinese vessels and was asked to leave while it was flying over to monitor them.

Tweeting about the incident before he departed for China, Locsin warned about the possibility of China shooting down Philippine aircraft in the area. “If they had shot down our military aircraft, two things would happen: World War III or the end of US prestige,” Locsin tweeted.

The United States has backed the Philippines.  White House national security adviser Jake Sullivan and Philippine counterpart Hermogenes Esperon discussed the situation on Wednesday and said they “will continue to coordinate closely”. Washington reaffirmed the applicability in the South China Sea of the US-Philippine Mutual Defence Treaty.

On Thursday, Chinese foreign ministry spokeswoman Hua Chunying repeated Beijing’s claim that the vessels were “sheltering from wind”. She said the reef belonged to China and relations with Manila should not be affected.

“We know some forces have been trying to drive a wedge between China and the Philippines. We trust that the Philippine side will be able to distinguish right from wrong and not be fooled,” she said.

Antonio Carpio, former associate justice of the Philippines’ Supreme Court, described the situation as “a prelude to occupying Julian Felipe Reef, like [China] did to Mischief Reef in 1995”, referring to another Philippine-claimed reef.

Collin Koh, a research fellow at the S. Rajaratnam School of International Studies in Singapore, said the ships’ presence would consolidate China’s control over the South China Sea but presented a dilemma for the Philippines.

“As has been pretty well established, the deployment of ostensibly fishing vessels in the South China Sea is one way for Beijing to stamp its claims to sovereignty and rights in the disputed waters,” Koh said. “The fishers are expected to be the eyes and ears of the Chinese military for the purpose of asserting Chinese sovereignty and rights.

“It does put Manila in a dilemma: act decisively against the boat swarm and risk provoking conflict, or fail to act and risk incurring public wrath back home.”