New Zealander back from Myanmar raising funds for anti-coup protesters

New Zealander back from Myanmar raising funds for anti-coup protesters 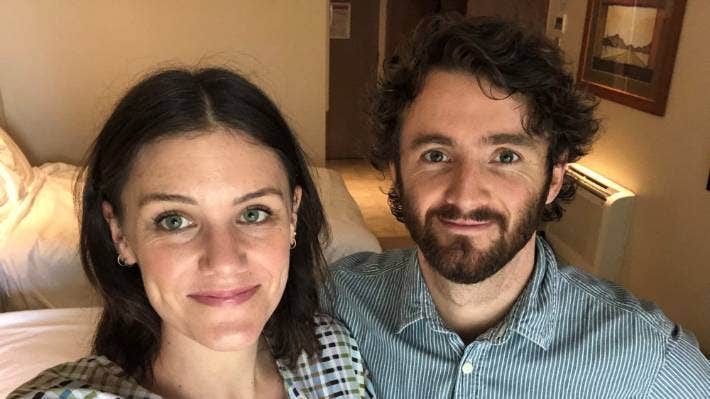 The long queues stretched out the door of Yangon (Rangoon) International Airport.

People, mostly foreigners, were leaving in droves with everything they had, including their pets.

In the three hours it took development workers Hannah Cunneen, 33, originally from Ashburton, and her partner, British national Rowan Hamill-McMahon, 31, to get in the airport door, they had ample time to consider those left behind.

“We were both racked with guilt for leaving,” says Cunneen, who arrived in New Zealand on Sunday and is in quarantine in Auckland with Hamill-McMahon, who she met in Myanmar.

“You know you’re leaving our home again and all the small business that we were excited about, many of which going under. Our friends weren’t sleeping, our colleagues had been tear-gassed.

“It didn’t feel right that we were able to leave and these beautiful people had to stay and fight such a cruel battle.”

Initially, the couple had told their international consultancies they were determined to stay.

“We felt now was not the time to desert the country we loved most. But things were escalating. Our work colleagues were concerned about our wellbeing and embassies were raising alert levels.

“I was starting to lose a lot of sleep. The conversations started to become desperate, and it got to the point where two seats were available. It became apparent it was time to go before things became more difficult to leave.”

The couple admit there was not much they could have done to help the anti-coup movement even if they had stayed.

“But we could have been a witness. We kind of felt at least someone would be seeing what is happening,” Hamill-McMahon says.

He has worked in Myanmar since 2016 and Cunneen, who is an agricultural development specialist, began her job in the country of 54 million in 2018. They were pulled out after Covid-19 hit, but returned in late January – a day before the military coup on February 1.

The military has since cracked down on street protests with water cannons, tear gas and rubber bullets. On Saturday last week, more than 100 people were killed by police and the military, bringing the total of people killed in the suppression of protests to 400. Journalists and politicians have been arrested and detained.

The couple were still in quarantine in a hotel in Yangon when the coup started. They had good view of the streets and squares where the protesters gathered.

“We were just down the road from where tens of thousands of people would congregate before they walked into the city,” Cunneen says.

“We were blown away by the numbers and the energy behind it and the noise. At 8pm the pots and pans started clanging. It was weird we were stuck in a hotel watching things happening around us like it was a very long movie. We came out to a very different Myanmar to the one we left.”

The first couple of weeks after the coup were relatively stable, she says. They noticed more police on the streets but trucks full of protesters were streaming into the city.

“It was almost a carnival. There was so much noise and energy behind it.”

The tone changed when the military cut off the internet. Soldiers came onto the streets, barricaded certain areas and blasted protesters with water cannons.

The shooting of Mya Thwe Thwe Khaing, who was shot in the head just before her 20th birthday in the capital Nay Pyi Taw – the first of at least three people to die in the protests – sent a ripple through the country, Cunneen says.

As the suppression tightened, a hard core of protesters staged flash protests around the city but most people stayed home.

Cunneen says another form of protest could prove more effective. Workers in the public and private sector are refusing to turn up for work, paralysing the economy. The New York Times estimates economic activity in Myanmar has reduced by 90 per cent.

“Protests and the civil disobedience are quietly chipping away at military’s ability to operate. Those protesting now are millennials and Gen Z. They have heard the stories from their parents about what it was like under military rule, and they do not want to live like that.

“Myanmar’s people are incredibly resilient, resourceful and creative and very stubborn. They would rather put their bodies on the line than let their country be covered by a cloak of darkness again.”

Donated money can be used to support the people who are engaging in civil disobedience, Cunneen says.

“Civil disobedience has shown it has real legs. People are refusing to budge. We can provide funds to allow them to protest in a safe and peaceful way. There is no welfare system in Myanmar.”

The tragedy of the coup is that the country after decades of military rule – a democratically elected government headed by Aung San Suu Kyi took over in 2016 – was starting to blossom, she says. Foreign investment was increasing, tourism was thriving and people were starting new businesses.

The couple lived in downtown Yangon, an area known for its colonial architecture. They had two street cats and, although new bars and cafés were opening, street vendors still sold produce on every corner and dogs roamed free. Colonial buildings were being restored and new uses found.

“We always felt safe and secure. We really felt like it was home, we loved it. It was a very exciting time to be in Myanmar. Things were changing rapidly and there was so much hope about the new government in 2016.”

The couple accept Myanmar has a problem with the way the elected government handled allegations of mass killings of the Rohingya people in the Rakine province, but say Suu Kyi’s administration is constrained by a constitution imposed by the military, which is guaranteed 25 per cent of the seats in parliament.

“This movement has united the whole country. Everyone is united in opposing what is happening. Rohingya refugees give the three finger salute. There is a real outpouring. People are realising we were wrong about Rohingya now it’s happening to us,” Hamill-McMahon says.

Hamill-McMahon has written an open letter apologising to the people of Myanmar for leaving.

“I’m sorry that when more than ever you need allies, advocates and witnesses, your expat friends are leaving in droves,” he writes.

“We watched in horror and fear as the military has murdered your people, men women and children alike. We have shed many tears to see our fallen heroes and spent long sleepless nights dreading the morning news.

“I’m so sorry our toothless international community can’t or won’t take meaningful action. By you must be sick of hollow words, but I mean it when I say I’m appalled at how weak foreign action has been.”

The couple have started a “Three Fingers for Freedom” Givealittle page.