New Zealand’s Ministry of Foreign Affairs and Trade (MFAT) approved export permits for military equipment that was sent to the United Arab Emirates (UAE), a key partner in Saudi Arabia’s military intervention in Yemen, in 2018 and 2019. 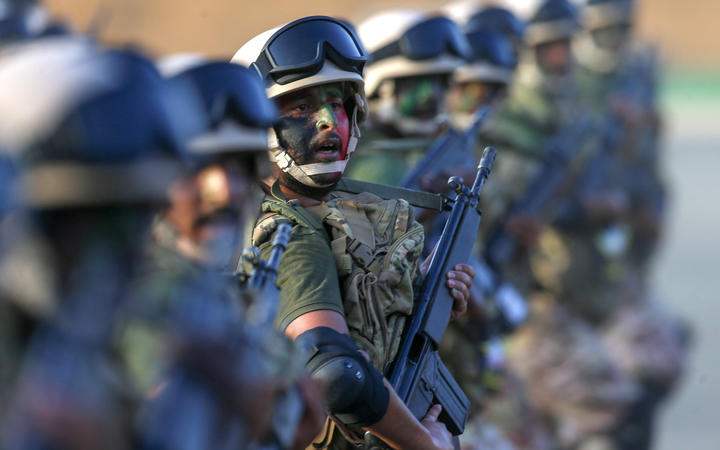 File photo: Saudi armed forces march during a parade in Saudi Arabia’s holy city of Mecca on August 13, 2018, ahead of the annual Hajj pilgrimage. Photo: AFP

Experts say the information heightens concerns that New Zealand may have contributed to war crimes in Yemen following revelations last month that similar exports were approved for Saudi Arabia. It comes as MFAT reviews its export controls regime to ensure it’s fit for purpose.

Since 2015, at least 100,000 people have died in Yemen’s civil war, which has also displaced millions and pushed the country to the brink of famine. In February, a UN expert group urged states “who continue to supply arms to review their positions in line with the requirements of international law”.

Despite its ongoing review, MFAT has staunchly defended the approval of export permits for weapons sent to Saudi Arabia and the UAE. The two countries have carried out extensive and, according to the UN, indiscriminate bombing of areas in Yemen controlled by Houthi rebel forces.

Documents obtained by RNZ under the Official Information Act detail a 2018 permit granted for weapons suppressors that went to the UAE Land Forces, and 2018 and 2019 shipments of artillery control systems that the Land Forces intended to use for training students in their “School of Artillery”.

The exporters identities, and the quantity and value of the equipment have been kept secret by MFAT.

“In both cases it was assessed that they would not be used in Yemen and the applications were approved,” An MFAT spokesperson said.

“MFAT carefully assesses all applications against the New Zealand Export Controls regime framework of criteria, which includes specific consideration as to whether any equipment could be used to contribute to human rights abuses, as well as any reputational risks by association with entities or countries.”

A similar explanation was issued in relation to three export permits granted for equipment sent to Saudi Arabia’s military in 2016 and 2018. Ten days after RNZ reported the exports, MFAT’s deputy chief executive policy Ben King said mortar targeting systems sent to the Saudi Navy did not pose a risk to civilians.

“We’ve got no evidence whatsoever that that sort of equipment would be used anywhere near civilians,” he told a parliamentary select committee.

However, reports from human rights groups, and interviews with security experts and a former MFAT official appear to conflict with King’s claims.

Waikato University law professor Al Gillespie said New Zealand’s obligations under the Arms Trade Treaty did not distinguish between military factions, but rather on whether a state was committing human rights abuses.

“If we’ve got concerns that there may be serious violations of the laws of war, and we have legitimate concerns in this area, we should be just saying no trade full stop.”

Gillespie added that Saudi and UAE forces outside of their Air Forces had also been involved in potential human rights abuses.

This is consistent with a 2019 UN report that identified not just airstrikes but “indiscriminate shelling” as contributing to possible war crimes in Yemen.

A separate 2019 report from Amnesty International found that the UAE had bought advanced weaponry, including mortar systems, from Western countries that it had then supplied to anti-Houthi rebel forces who were responsible for civilian casualties.

In January, the United States and Italy halted arms exports to Saudi Arabia and the UAE.

The former MFAT official, who had direct knowledge of the export controls regime in the early-to-mid-2000s but was not authorised to speak on the record, told RNZ that it was impossible for New Zealand to know where the military exports to Saudi Arabia and the UAE would end up, and how they would be used.

They described MFAT’s justification of exports to Saudi and the UAE as “bullshit”.

“Will New Zealand really be absolved of any wrongdoing by having sent military goods to one part of Saudi Arabia’s armed forces that it did not believe to be involved in war crimes?”

In a statement, Foreign Minister Nanaia Mahuta said MFAT “has a strict regime in place when assessing whether to grant permits for export-controlled goods. In 2020 this was further tightened by extending the catch-all controls under the Customs and Excise Act”.