How did Evergreen’s ship get stuck in the Suez Canal and create the world’s heaviest traffic jam?

Home/Analysis/How did Evergreen’s ship get stuck in the Suez Canal and create the world’s heaviest traffic jam?
Previous Next

How did Evergreen’s ship get stuck in the Suez Canal and create the world’s heaviest traffic jam?

Dredging crews are moving massive amounts of sand to free a skyscraper-size container ship stuck sideways in the Suez Canal, one of the world’s busiest shipping routes.

A salvage company will try to free the ship Saturday using large tugboats and dredging during a high tide, the AP reported. At least two attempts will be made. Salvagers are also considering moving containers off the ship, to lighten it and make it easier to move.

The 1,312-foot, 200,000 metric ton Ever Given – nearly a quarter-mile long – created a shipper’s nightmare and captured the public’s imagination when it blocked the canal on Tuesday and caused a traffic jam of more than 200 ships as of Friday.

An attempt to refloat the ship Friday failed, said Bernhard Schulte Shipmanagement, the company that manages the vessel. CNN said the U.S. Navy has offered to assist.

How did it happen?

The Ever Given is stuck near the Egyptian city of Suez, about 3.7 miles north of the canal’s southern entrance. It’s in a narrow section of the canal, about 985 feet wide.

Owners say high wind in a sandstorm pushed the ship sideways, wedging it into both banks of the waterway. Containers stacked on deck may have acted as a sail.

The bow is aground on the eastern bank and the stern is on the western.

The AP reported that at least 280 ships, carrying everything from cars to oil to grain, wait at the canal’s northern and southern entrances. It said an analysis by data firm Refinitiv showed more than 300 ships were en route to the canal over the next two weeks.

At least 10 tugboats have been brought in to reposition and refloat the vessel.

Authorities disagree on how long the canal will be blocked. The ship’s owner, Shoei Kisen, said its goal was to free the vessel by the night of March 27.

An Egyptian presidential adviser told Agence France Presse on March 26 that traffic would resume within 48 to 72 hours. However, the CEO of a dredging company has said the operation could take weeks.

The uncertainty has forced some shippers to alter course and take the longer, alternate route around the Cape of Good Hope in Africa, adding weeks to their destinations and increasing fears of piracy. Some have contacted the U.S. Navy about increased security.

Officials are under great pressure to remove the ship. 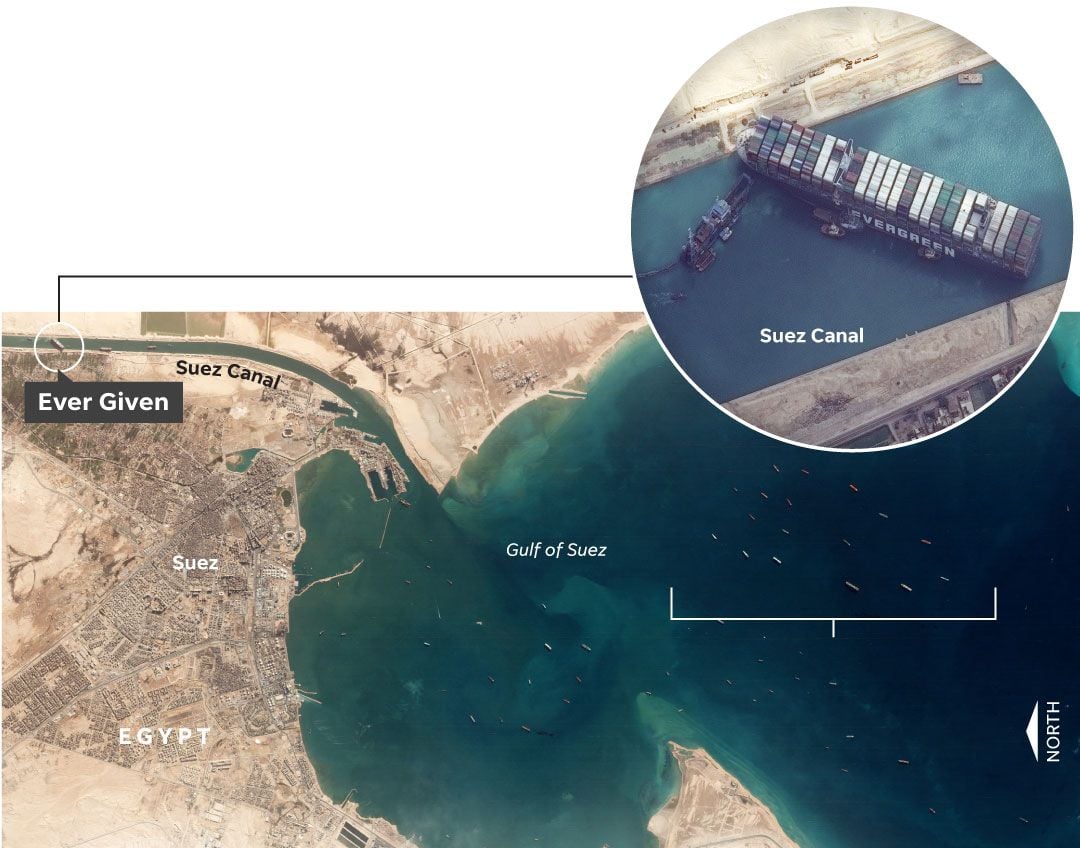 The canal is a 120-mile-long shipping link between the Mediterranean and Red seas that carries 10% to 12% of commercial shipping and about 2.5% of the world’s oil. A German insurer said delays could cost global trade $6 billion to $10 billion a week, Reuters reported.

GlobalSecurity.org calls the canal “strategically and economically one of the most important waterways in the world.”

The Suez Canal opened in 1869. It’s a sea-level canal, without locks, connecting major bodies of water at different altitudes. It normally takes a ship 13 to 15 hours to cross from one end to the other. It’s been widened over the years, with the latest project in 2015 at a cost of $8 billion.

It’s operated by Egypt, through its state-owned Suez Canal Authority. Canal revenue for Egypt was $5.6 billion in 2020, according to Arab News. On average, about 50 ships pass through the canal daily.

The Panama-flagged Ever Given was built in 2018 and is operated by Evergreen Marine of Taiwan. It can carry 20,000 20-foot containers, according to Reuters, and transports cargo between Asia and Europe. It has a crew of 25.

As authorities scramble to free the vessel, the world watches in anticipation. Despite the serious implications of the jam, some on social media have been making light of the situation including a popular comic and a parody account for a digger at the center of the action.