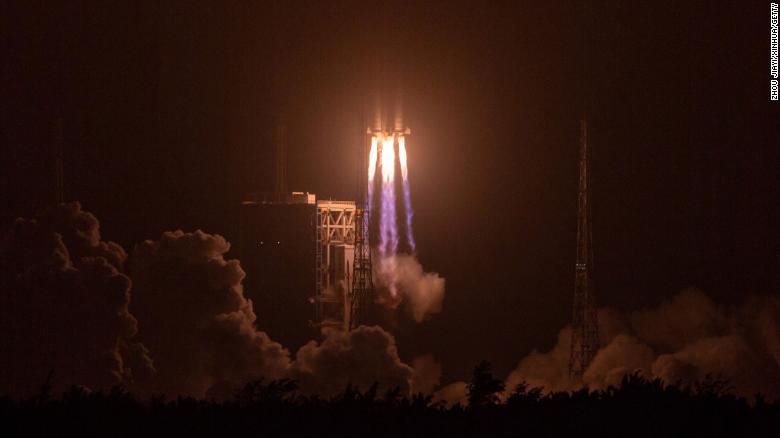 China’s Long March 7A rocket blasts off from the Wenchang Spacecraft Launch Site in Hainan Province on March 12.

The rocket launched from the Wenchang Space Launch Site, in China’s southern Hainan province. Photos from the scene show crowds gathered with tents at a distance, waiting to witness the liftoff.
The rocket carried the Shiyan-9 satellite to test new technologies such as space environmental monitoring, according to the China Aerospace Science and Technology Corporation (CASC).
CASC built the experimental satellite in only eight months, setting a record for mid- to large-size remote sensing satellites, said the government-owned space contractor.
The Long March 7A is a three-stage rocket with four boosters, measuring 197 feet (60.1 meters) long and 11 feet (3.35 meters) in diameter. It has the capacity to send seven metric tons of payload to geostationary transfer orbit (GTO) — approximately around 22,000 miles (35,405 kilometers) above the Earth’s surface.
The rocket is primarily designed to launch satellites into GTO, with the potential of being upgraded to Moon, Mars and asteroid exploration in the future, according to CASC.
China’s first attempt at launching the Long March 7A, in March 2020, suffered a launch failure at the Wenchang Space Launch Site. At the time, Chinese officials said engineers would investigate the cause of the failure, without giving any more details.
China expects to launch three to five Long March 7A rockets every year before 2025, according to CASC.
China has an ambitious space program, buoyed by billions of dollars in government investment. In recent months, the country has launched both lunar and Mars missions.
In July 2020, China launched its first unmanned mission to Mars — the Tianwen-1 probe, which entered the red planet’s orbit in February this year. And in December 2020, China’s unmanned Chang’e mission brought lunar samples back to Earth — making it only the third country to successfully collect rocks from the moon.
On Tuesday, the country’s space agency signed an agreement with the Russian space agency to jointly build a lunar space station on the moon’s surface and/or in orbit of the moon, which will be “open to all countries.”