Aggressive behaviour by China is being pushed back by Canberra but worrying developments in the Indo-Pacific could give them the ability to coerce Australia, warn experts.

Distant. Insignificant. Safe. But Australia’s place in the world has changed. And trouble’s reaching into our backyard.

On the global stage, Australia’s sticking its neck out.

“It is heartening to see that Australia as a leading middle power is once more playing an important role in upholding the global rules-based order in the region,” says Professor Sascha-Dominik (Dov) Bachmann, with the Morrison government displaying “awareness of Beijing as a source and originator of current threats to regional (and global) rule of law, security, and stability”.

“China’s influence eroding the sovereignty of (Australia and New Zealand) has been known for years, and the Morrison government has been at the forefront of countering Beijing’s such grey zone or hybrid activities,” he writes.

But Beijing’s ability to act beyond cyber and influence operations is growing.

“Historically, the region has not been a leading source of ‘traditional’ military threats,” argues Pacific Forum analyst Tom Corben, “but America and Australia can no longer afford to overlook the (Pacific) as a locus of Chinese security activity”.

China has already hinted at its desire to establish a permanent military presence in the region. This could give Beijing the ability to coerce island nations, including Australia, and sever critical supply lines with the United States.

“Such a development would allow China to surveil alliance peacetime activities, exert control over vital waterways, or threaten local forces in the event of major conflict in Asia,” he writes.

“Beijing’s increased aggressive behaviour had to be countered at one point and this is what is happening now.”

Figures of Kuomintang soldiers are seen in the foreground, with the Chinese city of Xiamen in the background. Picture: An Rong Xu/Getty Images.Source:Getty Images

There are countless offences against the (rules-based order) which Australia overlooks because they happen too far away,” he argues. “Would we come to Taiwan’s aid if it meant risking involvement in what could escalate to a nuclear war?”

Australian warships and aircraft have joined US, Indian and Japanese forces in recent drills. They also are likely to team up with a British aircraft carrier task force when it visits the South China Sea later this year.

Professor Bachmann told NewsCorp he sees such “pushback” already happening on a multitude of fronts.

“Of more practical concern are Beijing’s increased influence operations targeting Australia and its allies. Based on the CCP’s version of non-contact, below the threshold of warfare, Beijing’s tactic of “unrestricted warfare” takes place in the so-called grey zone,” he writes.

India, Australia, Japan and the United States started the second phase of the Malabar naval exercise in the Arabian Sea in November 2020. Picture: Indian Navy/AFPSource:AFP

“It’s a whole spectrum of operations targeting our way of life and sovereignty by exploiting expertly our vulnerabilities of an open and democratic society,” he says. “Canberra has to work towards adopting a comprehensive counterapproach which raises awareness of the current grey zone conflict and increases resilience.”

Such “grey zone” actions, along with Beijing’s aggressiveness in the East and South China Seas, has prompted Canberra and Washington to begin meeting annually to discuss emerging challenges.

“These discussions have underscored several assumptions and expectations in need of revisiting, including as to where the allies should expect to better defend, deter and, if necessary, fight together in the Indo-Pacific,” Corben adds.

It also has eyes on a Second Island Chain running through Japan, Guam and the Marianas Islands to Papua New Guinea in the south.

Then there’s its Third Island Chain which embraces the US Aleutians, Hawaii, Fiji and New Zealand.

Beijing’s already working towards that goal.

In 2018, reports emerged of a Beijing bid to access Vanuatu’s ports. A few months later, a similar move was made on Papua New Guinea’s old naval base on Manus Island.

In 2019, Beijing attempted to lease old World War II naval and air bases on Tulagi in the Solomon Islands.

In 2020, the Torres Strait island of Daru was identified as the target of a state-controlled Chinese port project proposal.

“Competing with Beijing on the basis of dollar figures alone does not advantage the allies in the long term, and it would thus seem extremely difficult to deter China from seeking regional strategic access if it is determined to do so,” writes Corben. “Instead, it could prove cheaper to invest in new military capabilities to limit the utility and usability of prospective Chinese facilities.”

OF DRAGONS AND ECHIDNAS

The Lowy Institute’s Roggeveen says that Australia’s commitment to the existing rules-based order “has implications for how our defence force is structured and the weapons we buy”.

But the type of weapons a nation owns can be seen as signalling defensive – or offensive – intent.

“Australia, of course, does have substantial amphibious forces, allowing us to move hundreds of troops and their equipment over thousands of kilometres of ocean,” he writes.

“We are also planning to develop the capability to bomb adversaries at long range. Defence Minister Linda Reynolds announced last month that the government is investing $1 billion in a new range of missiles, including one with a range in excess of 1500 kilometres to strike land targets from the sea.”

Such long-range, land-attack missiles are problematic, Roggeveen argues. They give Canberra the capability to commit acts of aggression.

“Adopting a non-offensive force structure (what I have called an Echidna Strategy) makes sense in terms of our interest in forging a tolerable balance of power in our region, and in terms of our commitment to the rules-based order.”

But what if Australia was under siege?

The need to deny access to the Indian and Pacific Oceans may be why the US and Australia recently agreed to co-develop new long-range anti-ship and anti-shore missile systems, argues Corben.

“Aside from holding local Chinese forces at risk, expanding collaborative research and development – and deployment – would help Australia generate independent strategic effects, and assist the United States with addressing a raft of challenges associated with implementing the Indo-Pacific Strategy.” 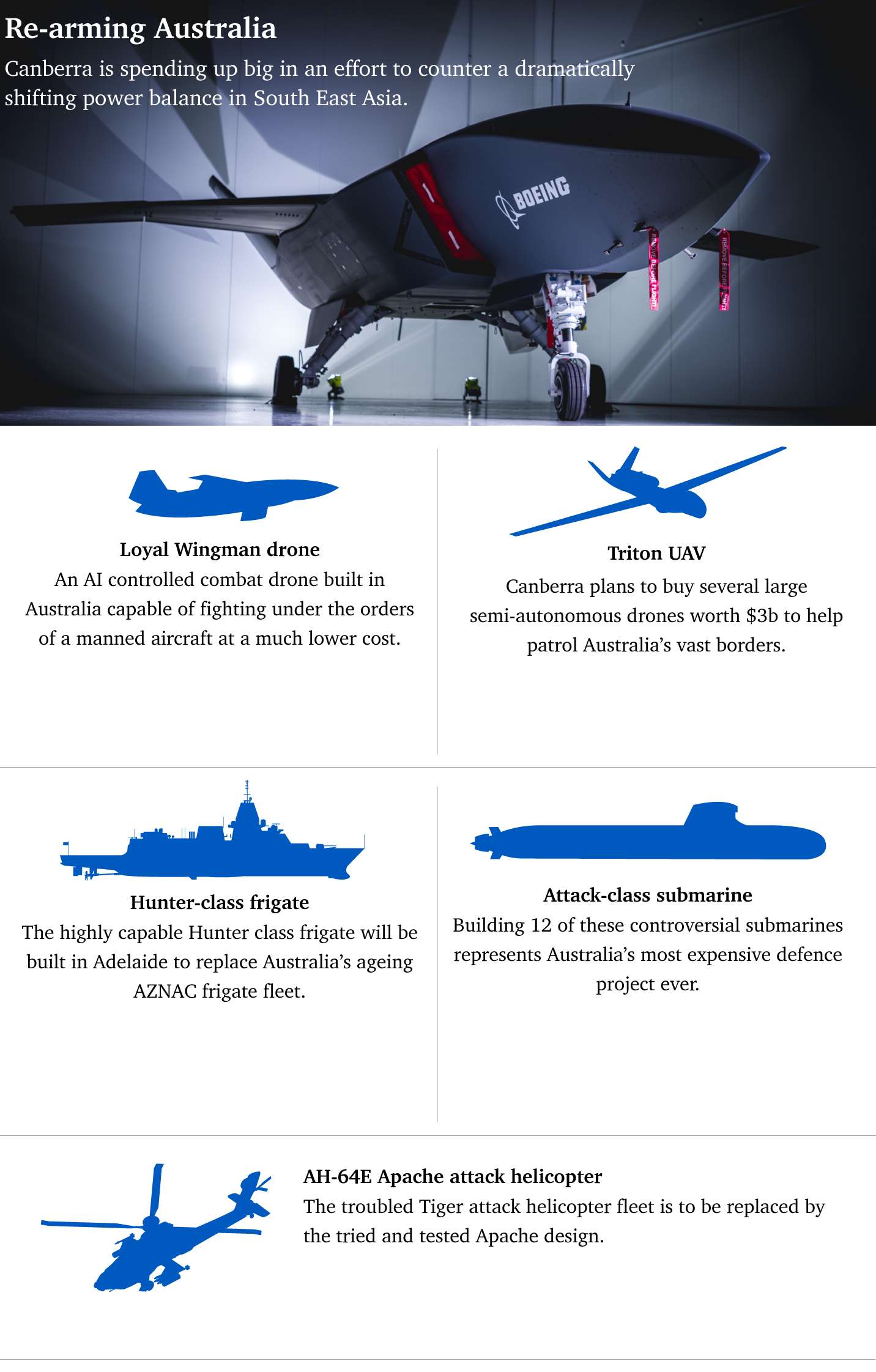 Put simply, that means such missiles would give Australia greater capacity to cover its expansive interests and assist in allied operations.

Recent Australian defence announcements appear to indicate just such a shift in strategy is underway.

The guided-missile destroyer USS Preble conducts an operational tomahawk missile launch while underway in a training area off the coast of California, on September 29, 2010. Picture: AFP.Source:AFP

Professor Bachman told NewsCorp he believes securing extended-range weapons “is the right decision as it protects our front yard so to speak and threatens CCP’s increased maritime ambitions across the seas”.

Australia’s warships, transports and submarines must pass through narrow channels – such as the Malacca Strait near Singapore, Indonesia’s Sunda Strait or Papua New Guinea’s Vitiaz Strait – to access Asia.

But it cuts both ways.

Vessels originating from Asia must also use these channels or take a more distant route through the Solomon Islands. 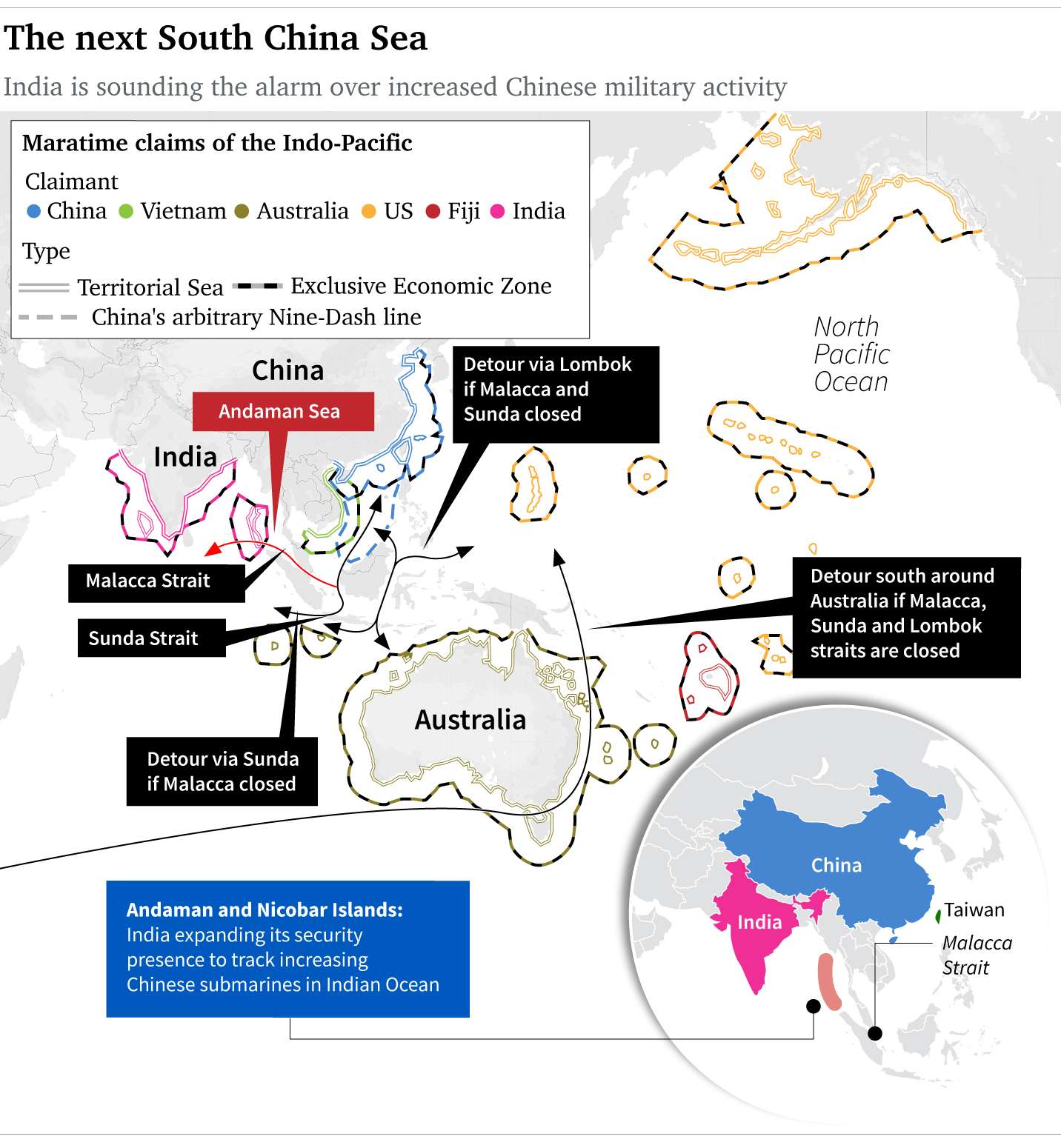 Influencing these approaches is, therefore, of critical strategic importance to Australia.

And Canberra’s recent defence shopping list may reflect this.

But what if operations are being launched from bases in our own backyard?

“The Royal Australian Navy currently doesn’t have a land-strike capability, beyond the very limited effect provided by its guns and the Harpoon anti-ship missile,” Hellyer notes. “Even the Royal Australian Air Force has very few arrows in its strike quiver.”

But buying a big cruise missile like the US Tomahawk has drawbacks. Given the limited missile-carrying capacity of Australia’s handful of frontline warships, every land-attack missile carried is one less available to defend from attack.

“A large number of missiles could be based in Australia and they would be difficult to detect and destroy, but they might not have sufficient range to reach potential targets,” Hellyer writes. “A bomber can … both kick in the door with long-range weapons and follow up with direct attacks using cheaper, more plentiful short-range weapons.”

“Australia’s growing concern in regard to China and its awareness of hostile activities by Beijing has seen … the adoption of a record-high defence budget and increased spending on cyber as well as investment into grey zone capabilities,” says Professor Bachmann.

But it’s not all about weaponry, he adds. “Defence spending is (being) augmented by an increased diplomatic, international law and relations-centred, strategic alliances approach.”

Pacific Forum analyst Corben says the balance of power in our region has changed dramatically. And Australia could face a regional security crisis in its neighbourhood.

“There is arguably a growing need to incorporate planning and action against this possibility, however slim, into alliance discussions,” he writes.

“The alliance urgently needs to consider whether China’s alleged designs can be deterred or, if not, forge a consensus on how best to mitigate the strategic challenges that could result.”

Meanwhile, ASPI’s Hellyer says Canberra must continue to address its ability to defend its backyard.

“Once the (Australian) task force’s small number of missiles had been delivered, it would take several weeks to rearm in southern Australia, giving the adversary time to regroup, reinforce and get ready for round two,” he warns.

“(A bomber) can adjust its load-out every day for different missions. And a bomber has a human crew of only two who are in danger, in contrast to the 500 or more in a maritime task force.”