Earthquakes and tsunami threats in New Zealand: How Friday unfolded

Home/News/Earthquakes and tsunami threats in New Zealand: How Friday unfolded
Previous Next

Earthquakes and tsunami threats in New Zealand: How Friday unfolded

This Friday was expected to herald a possible reduction in Covid-19 alert levels for many New Zealanders, but the first big shake off East Cape in the wee hours of the morning meant a sudden change of plans for many.

Three earthquakes off the coast of New Zealand today has meant threat of tsunami for many on the coast, prompting towns to be evacuated, their people sheltering on high ground for hours.

Read how it all unfolded… 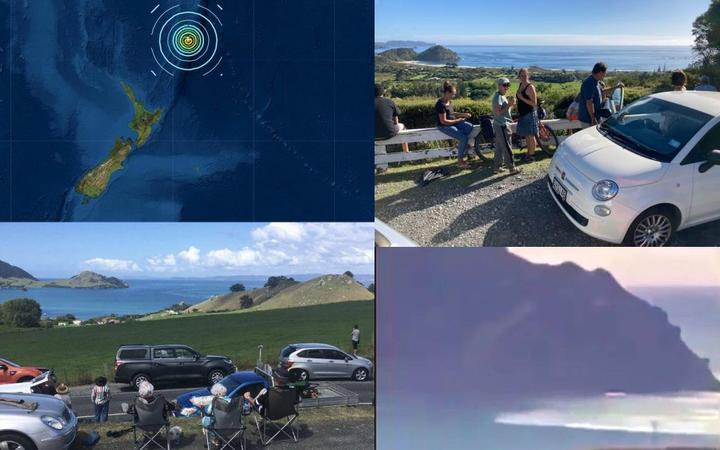 At 2.27am a severe 7.1 magnitude quake struck 100km east of Te Araroa. It was widely felt across the North Island and parts of the South Island – by 3am, nearly 60,000 people reported feeling it on Geonet.

Evacuations began to take place from Tolaga Bay – where the quake had cut power – to Cape Runway.

The first waves were detected on East Cape about 3.25am, officials said. They warned the first wave may not be the largest and tsunami activity was expected for several hours.

About 4.20am, people in Hawke’s Bay were told they were able to return home.

Civil Defence deputy manager in Tolaga Bay Nori Parata said most people there took themselves to higher ground when first quake struck off the East Cape in the early hours of the morning.

She said they made the decision to close the school at 5am, shortly before the first warning was lifted, and since most students and parents had been awake since 2.30, they left it in place.

Some nine aftershocks had been recorded by GeoNet by 4.44am, ranging from 4.4 in magnitude to 5.3, and five further aftershocks followed in the next 20 minutes.

Just before 5.30am, Civil Defence said based on the scientific advice and information they had at the time, there was no longer a land threat – evacuees were able to return to their homes. Strong and unusual currents and unpredictable surges were still expected so Civil Defence said people in or near the sea needed to move out of the water and away from the shore or any harbours, rivers and estuaries.

About 6am, Civil Defence cancelled the tsunami warning and said the threat of strong and unusual currents had passed. Power had also been restored in Tolaga Bay by about 6.30.

Then another earthquake hit.

A 7.4 magnitude quake, about 45km deep struck near the Kermadec Islands about 6.41am NZ time. Seismologist John Ristau of GNS Science said the Pacific plate had pushed against the Australian plate along the boundary of the two.

Civil Defence issued a new tsunami warning just before 7.30am – once again coastal areas were expected to experience strong and unusual currents and unpredicatable surges at the shore. Areas under threat were the east coast of the North Island from the Bay of Islands to Whangārei. 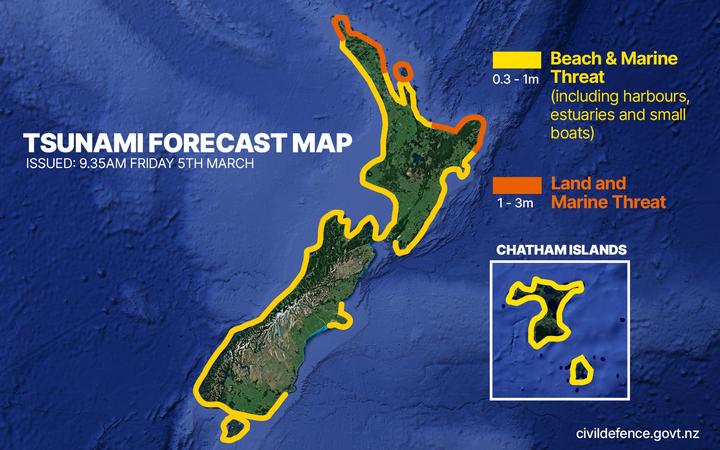 In Tolaga Bay, Parata said the first tsunami alert in the early hours of the morning was “a good dress rehearsal” for the second, and by the time it landed about 8am, people were already on high alert.

Hinemaurea marae, the kura at Mangatuna and Kaiaua Hill were all packed with people.

“They were definitely prepared, they all had drinking water; they had barbecues, they had roasts in the oven. So, you know while we all have a healthy respect for the alert that’s on the natural community instinct has definitely kicked in.”

Another tsunami warning. People near the coast from the Bay of Islands to Whangārei, from Matata to Tolaga Bay, and Great Barrier Island were told to evacuate immediately. NEMA advised anyone from any area who felt a long or strong earthquake to move immediately to the nearest high ground.

“This is the third significant earthquake this morning and it is concerning,” said NEMA director Roger Ball.

People across the North Island’s East Coast began evacuating their homes and moving out of the reach of the tsunami threat.

Whangārei’s CDB was being evacuated before 9am, with people standing on Bank Street, away from the town basin and tsunami zones like Port Rd. Traffic built on the roads as people fled the area.

Some, heeding the “long and strong, get gone” tsunami safety advice, had already made a move.

By 10am, strong and unusual currents, and unpredictable surges near the shore were expected nearly everywhere in coastal New Zealand. Boats had been told to seek deeper water and stay in place.

Emergency Management Minister Kiri Allan said the first waves of a tsunami after the latest earthquakes were expected about 10.20am.

A large surge of water could be seen rolling into Tokomaru Bay north of Gisborne as residents watched from Busby Hill.

Local resident Claudia Maaka, who filmed the waves this morning, says they looked about 2-metres high.

“At quarter past 10, I think we started noticing a bit of surging happening in the water and we were watching and then one of the ladies next to me actually said ‘this is the first one’.

“So that’s when we all started noticing that it was the first small wave. Yeah it was just the buildup you would’ve seen in the video, it’s a slow buildup that came round the corner, down Waima Point, came round from there and then just slowly built up.”

By 10.17am, Ōpōtiki District Councillor Louis Rapihana said the sea had changed and waves were beginning to get bigger. A number of people in low lying areas had refused to evacuate. 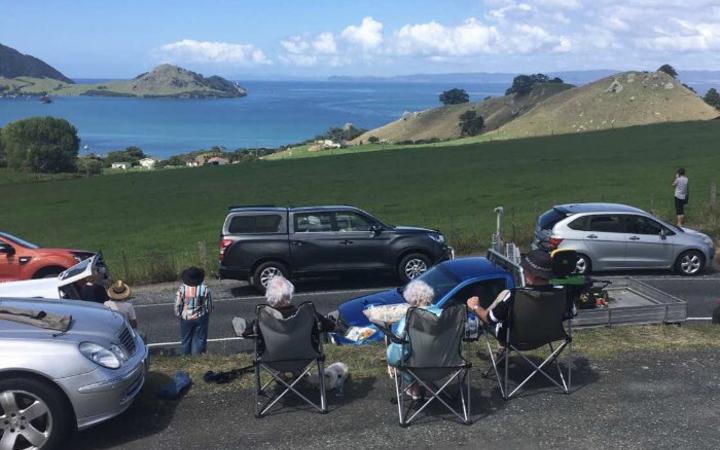 Just before 11am, Tolaga Bay had been evacuated. Hundreds of people had left coastlines around the country for shelter and were waiting. The National Crisis Management Centre – also known as the Beehive bunker – had been stood up.

Then, as is common when tsunami strike, the water began to recede.

National’s Dr Shane Reti, from high ground near Whangārei, was one of those who said he could see the sea going out.

Ōpōtiki District Councillor Louis Rapihana said the sea had changed around the town, and waves had begun to get bigger. 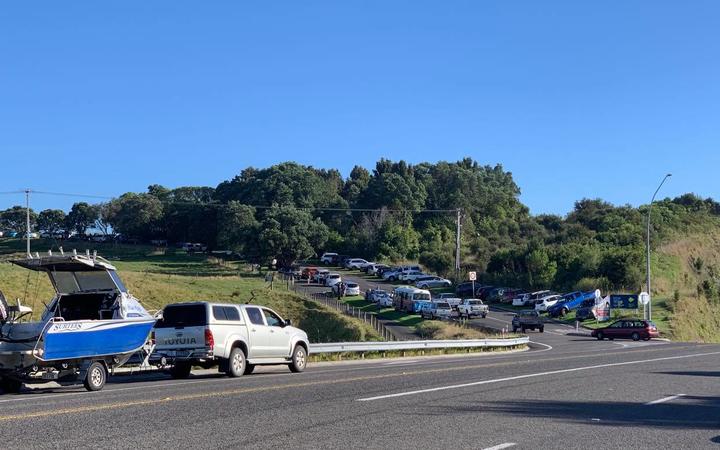 The tsunami waves were visible coming into Tokomaru Bay.

In a government live update about 11.40am, MP Kiri Allan said it had been a “dynamic event” that was constantly evolving. With Ōpōtiki fully evacuated, she thanked the people who had done the right thing.

Allan said waves in lower-lying areas could get to under 1m, but the areas being evacuated could have a surge of between 1m and 3m. She warned that evacuation warnings may need to remain until the afternoon.

Roger Ball urged people not to go sight-seeing in coastal areas. He said the first wave may not be the largest.

“We’re advising to play it safe… Stay off the beach and out of the water … the severity of currents and surges will vary over the period this morning that the warning is in effect for.”

In Auckland, Britomart train station closed due to threat of flooding. Aucklanders were warned not to go to the beaches. 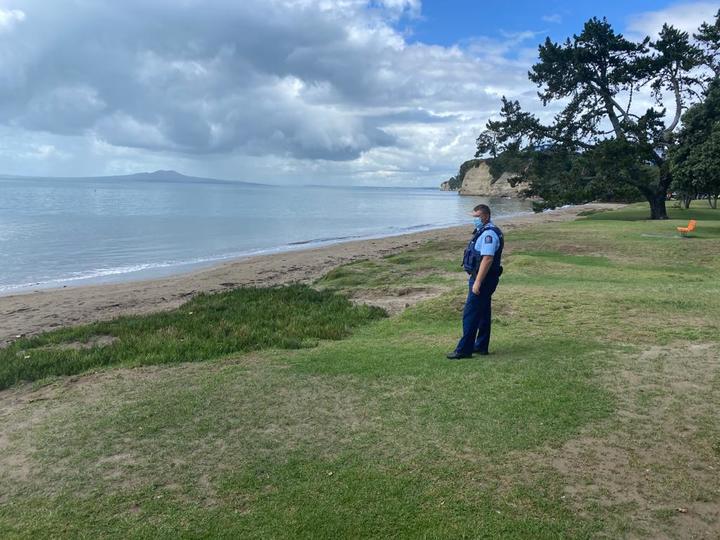 In New Plymouth, about 30 surfers and 12 swimmers ignored the warning, earning criticism from other locals.

By 1.20pm however, GNS advised the main threat had passed, with the largest waves having already hit. While beaches were still to be avoided, people who evacuated could return and anywhere further inland was considered safe.

Whakatāne residents spent more than five hours at the top of the hill overlooking the township, watching for tsunamis.

A teacher at the local high school, Sue, says she had to walk 1400 school kids to the top of the hill about 9am and was relieved everything was over and everyone was safe.

“First it was said ‘oh there are a few more hours to wait’, but luckily that was lifted about an hour after.”

By 3.45, even the beach and marine threat was over, meaning all warnings were cancelled.

At 4pm came the promised decision from Cabinet on Covid-19 alert levels. It all kicked off with another statement from the Civil Defence minister.

“I think one of the key takeaways from today is really the reminder we are islanders of a small Pacific Island nation that is surrounded by coastlines, tsunamis are a big part of our lives … have a packed bag ready to go, have a plan about what to and how to do it,” she said.

“This has been a significant event for all of Aotearoa.

She also addressed some of the concerns raised over official messaging and communication about the tsunami warnings, and promised that further stress testing of the system would be done.

Prime Minister Jacinda Ardern said it was hard not to feel like New Zealand is having a run of bad luck.

“We have had our share of tough moments in this country, but within that we have always been blessed incredible people who work in our emergency system.”

Civil Defence warned that strong currents and unpredictable surges may continue for the next 24 hours.

The immediate danger, it seemed, had passed.