Sharks that glow in dark of the ocean have been seen for the first time off the coast of New Zealand. 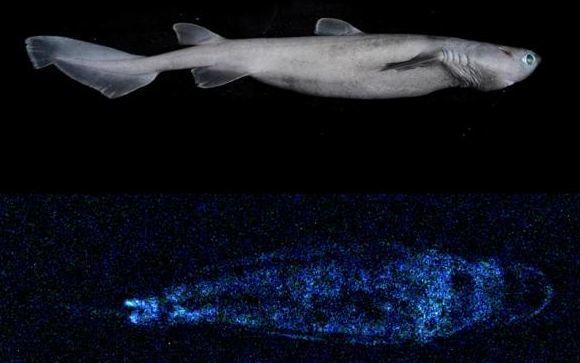 Researchers suggest the sharks’ glowing underbellies may help them hide from predators or other threats beneath them. Photo: ©Dr J. Mallefet FNRS, UCLouvain

Belgian scientists were able to document three species of luminous deepwater shark while on a research expedition to the Chatham Rise area of ocean floor, east of the mainland.

Marine biologist Dr Jérôme Mallefet, of UCLouvain university in Belgium, said scientists knew the sharks would be able to produce blue light but it had not been be documented.

“Thanks to NIWA I was able to collect some of them and finally to see [them] glowing,” he told Morning Report.

“It was so magnificent.”

Mallefet set up a dark lab aboard NIWA vessel RV Tangaroa to photograph the sharks. The room was blacked out to mimic the darkness of the deep-water ocean and the scientist photographed the sharks using a specialised camera. 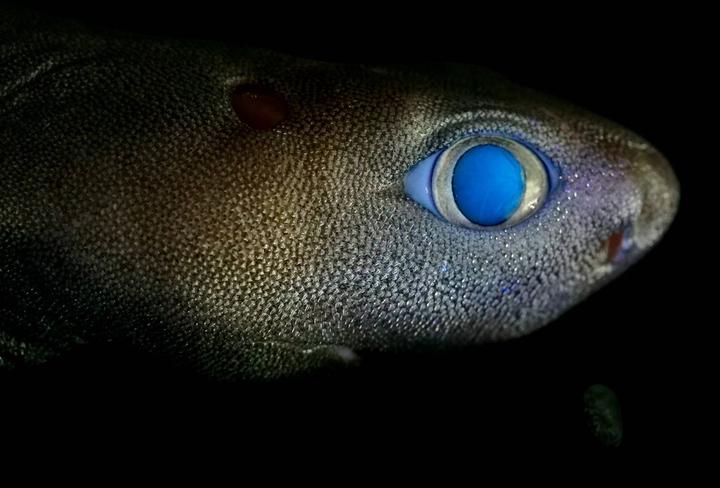 The sharks have thousands of photophores, or light-producing cells, in their skin. Photo: ©Dr J. Mallefet FNRS, UCLouvain

Before Mallefet’s experiment no one had recorded bioluminescent sharks producing light in New Zealand waters.

The sharks, like most bioluminescent species, produced blue light, a colour that travels well in the deep ocean. They have thousands of photophores, or light-producing cells, in the skin of their belly, lateral and dorsal sides.

The kitefin shark is the biggest vertebrate able to produce light, Mallefet said.

Bioluminescence was also confirmed in the blackbelly lanternshark and southern lanternshark.

While many marine animals – as well as some insects such as fireflies – produce their own light, this is the first time it has been found in larger sharks.

The researchers suggest the sharks’ glowing underbellies may help them hide from predators or other threats beneath them.

The three studied species inhabit a space called the mesopelagic zone, often called the twilight zone, which ranges from 200m to 1000m depth (the maximum depth reached by sunlight).

The species in question face an environment with no place to hide, hence the need for counterillumination as a form of camouflage, the researchers add.

The scientists said that considering the vastness of the deep sea and the occurrence of luminous organisms in this zone, it was becoming more obvious that producing light at depth must play an important role structuring the biggest ecosystem on the planet.