China’s Military is Massive: Can Taiwan Count On America If They Invade?

by Sebastien Roblin, The National Interest

Home/Opinion/China’s Military is Massive: Can Taiwan Count On America If They Invade?
Previous Next

China’s Military is Massive: Can Taiwan Count On America If They Invade? 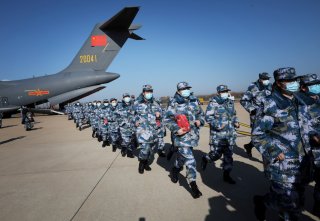 Despite a recent spike in tensions, China-Taiwan relations are still massively improved, exchanging university students and business investments rather than artillery shells and aerial bombs. However, the capabilities of the PLA have drastically increased in the interval as well.

Here’s What You Need To Remember: In the event of military conflict, most believe China would use the modern equivalent of the tactics used at Yijiangshan: a massive bombardment by long-range missile batteries and airpower well before any PLA troops hit the shore.

In 1955, the Chinese People’s Liberation Army embarked on a bloody amphibious landing to capture a fortified Nationalist island, only about twice the size of a typical golf course. Not only did the battle exhibit China’s growing naval capabilities, it was a pivotal moment in a chain of events that led Eisenhower to threaten a nuclear attack on China—and led Congress to pledge itself to the defense of Taiwan.

In 1949, Mao’s People’s Liberation Army succeeded in sweeping the Nationalist Kuomintang (KMT) government out of mainland China. However, the Nationalist navy allowed the KMT to maintain its hold on large islands such as Hainan and Formosa, as well as smaller islands only miles away from major mainland cities such as Kinmen and Matsu. These soon were heavily fortified with Nationalist troops and guns, and engaged in protracted artillery duels with PLA guns on the mainland.

In 1950, the PLA launched a series of amphibious operations, most notably resulting in the capture of Hainan island in the South China Sea. However, a landing in Kinmen was bloodily repulsed by Nationalist tanks in the Battle of Guningtou, barring the way for a final assault on Taiwan itself. Then events intervened, as the outbreak of the Korean War caused President Truman to deploy the U.S. Seventh Fleet to defend Taiwan. However, the naval blockade cut both ways—Truman did not allow Nationalist leader Chiang Kai-shek to launch attacks on mainland China.

This policy changed with the presidency of Eisenhower in 1953, who withdrew the Seventh Fleet, allowing the Nationalists to build up troops on the forward islands and launch more guerilla raids on the mainland. However, the PLA was able to counter-escalate with new World War II surplus heavy artillery, warships and aircraft it had acquired from Russia. The series of artillery duels, naval battles and aerial bombardments that followed became known as the First Taiwan Strait Crisis.

On November 14, four PLA Navy torpedo boats laid a nighttime ambush for the KMT destroyer Tai-ping (formerly the USS Decker) which had been detected by shore-based radar. An ill-advised light onboard the destroyer gave the PLAN boats a target, and the 1,400-ton ship was struck by a torpedo and sank before it could be towed to safety. Later, Il-10 Sturmovik bombers of the PLA Naval Air Force hit Dachen Harbor, sinking the Landing Ship (Tank) Zhongquan. These episodes highlighted that the Nationalists could no longer rest assured of control of the sea, making maritime lines of supply to the more forward island garrisons progressively less secure.

While the PLA unleashed heavy artillery bombardments on the well-defended Kinmen Island east of the city of Xiamen, it more immediately planned on securing the Dachen Archipelago close to Taizhou in Zhejiang Province. However, the Yijiangshan Islands, a little further than ten miles off the Chinese coast, stood in the way. The two islands measured only two-thirds of a square mile together, but were garrisoned by over one thousand Nationalist troops from the Second and Fourth Assault Groups and the Fourth Assault Squadron, with over one hundred machine gun positions, as well as sixty guns in the Fourth Artillery Brigade. The garrison’s commander, Wang Shen-ming, had been awarded additional honors by Chiang Kai-shek before being dispatched to the post, to signal the importance placed on the island outpost.

On December 16, 1955, PLA Gen. Zhang Aiping persuaded Beijing that he could launch a successful amphibious landing on the island on January 18. However, the planning process did not go smoothly: Zhang had to overcome last minute jitters from Beijing on the seventeenth questioning his force’s readiness for the operation. Furthermore, Zhang’s staff rejected a night assault landing, proposed by Soviet naval advisor S. F. Antonov, causing the latter to storm out the headquarters. Zhang instead planned the assault “Chinese-style”—which meant deploying overwhelming firepower and numbers in a daytime attack.

At 8:00 a.m. on December 18, fifty-four Il-10 attack planes and Tu-2 twin-engine bombers, escorted by eighteen La-11 fighters, struck the headquarters and artillery positions of the KMT garrison. These were just the first wave of a six-hour aerial bombardment that involved 184 aircraft, unleashing over 254,000 pounds of bombs.

Meanwhile, four battalions of heavy artillery and coastal guns at nearby Toumenshan rained over forty-one thousand shells on the tiny island, totaling more than a million pounds of ordnance.

The amphibious assault finally commenced after 2:00 p.m., embarking three thousand troops of the 178th Infantry Regiment, and one battalion of the 180th. The fleet numbered 140 landing ships and transports, escorted by four frigates, two gunboats and six rocket artillery ships. These latter vessels began pounding the island with direct fire, joined by troops of the 180th regiment, who tied their infantry guns onto the decks of small boats to contribute to the barrage. By this time, most of the Nationalist guns on Yijiangshan Island had been silenced, though artillery still sank one PLAN landing ship, damaged twenty-one others and wounded or killed more than one hundred sailors.

Troops of the 180th Regiment hit the southern beach at 2:30 p.m., shortly followed by a battalion of the 178th to the north—the landing zones totaling no more than one thousand meters across. Withering machine-gun fire from two intact machine-gun nests inflicted hundreds of casualties on the invaders, until low-flying bombers and naval gunfire suppressed the defenders. Shortly after 3:00 p.m., the assault troops broke through to capture the strongpoint at Hill 93, by which time they had been joined by two more battalions from the 178th.

As the defenses were overwhelmed, Nationalist troops fell back into a network of underground facilities. PLA troops began clearing the fortified bunkers, caves and tunnels with flamethrowers and recoilless guns, suffocating and burning many of the defenders. Nationalist troops on Dachen island received a final message from garrison commander Wang Shen-ming in redoubt in Hill 121, reporting that PLA troops were only fifty yards away. Shortly afterward, he committed suicide by hand grenade.

By 5:30 p.m., Yijiangshan island was declared secure. Zhang Aiping quickly moved his HQ over to the island, and scrambled to organize his troops into defensive positions to repel an anticipated Nationalist counterattack from the Dachen Islands that never materialized. Some accounts claim that his force may have suffered friendly-fire casualties from PLAAF bombers during this time.

The invasion had cost the PLA 1,529 casualties in all, including 416 dead. In return, the PLA claimed the Nationalist garrison had suffered 567 dead and had the remaining 519 taken prisoner, while the Republic of China maintains the true total is 712 soldiers dead, twelve nurses, and around 130 captured, of which only around a dozen would return in the 1990s. The last stand of the garrison is commemorated today with a number of memorials in Taiwan.

The seizure of Yijiangshan was immediately followed on January 19 by the commencement of a PLA campaign on the Dachen Archipelago, again spearheaded by intense aerial and artillery bombardments. One air raid succeeded in knocking out the main island’s water reservoir and encrypted radio communications system, and the United States advised the Republic of China that the islands were militarily untenable. On February 5, over 132 ships of the United States Seventh Fleet, covered by four hundred combat aircraft, evacuated 14,500 civilians and fourteen thousand Nationalist troops and guerillas from the archipelago, bringing an end to the Republic of China’s presence in Zhejiang Province.

Before that, just eleven days after the fall of Yijiangshan, the U.S. Congress passed the Formosa Resolution, pledging to defend the Republic of China from further attack. Then, in March, the United States warned that it was considering using nuclear weapons to defend the Nationalist government. Just a month later, Mao’s government signaled it was ready to negotiate, and bombardment of Nationalist islands ceased in May.

Whether Eisenhower’s nuclear brinkmanship was what led to the ending of hostilities, however, is much debated. Hostilities would reignite three years later in the Second Taiwan Strait Crisis, where the U.S. provision of Sidewinder air-to-air missiles and heavy artillery helped secure a favorable outcome for the Nationalists.

Gen. Zhang Aiping, the invasion force’s commander, would go on to serve in high posts in the Chinese military, including a stint Minister of Defense in 1983–88. However, he would encounter political troubles along the way: his leg was broken during the Cultural Revolution when he fell into disfavor with Mao. Later, in 1989, he signed a letter opposing the military crackdown on the protesters in Tiananmen Square.

The United States remains legally committed to the defense of Taiwan, even though it no longer recognizes it as the government of China. Despite a recent spike in tensions, China-Taiwan relations are still massively improved, exchanging university students and business investments rather than artillery shells and aerial bombs. However, the capabilities of the PLA have drastically increased in the interval as well.

In the event of military conflict, most believe China would use the modern equivalent of the tactics used at Yijiangshan: a massive bombardment by long-range missile batteries and airpower well before any PLA troops hit the shore. We should all hope that scenario remains strictly theoretical.

Sébastien Roblin holds a master’s degree in conflict resolution from Georgetown University and served as a university instructor for the Peace Corps in China. He has also worked in education, editing and refugee resettlement in France and the United States. He currently writes on security and military history for War Is Boring. (This first appeared in 2017.)