Great Power Rivalry in the Arctic Circle is Heating Up

by Andrew A. Latham, The National Interest

Great Power Rivalry in the Arctic Circle is Heating Up 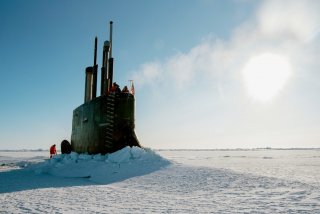 The signs of intensified rivalry are obvious. According to a recently updated Congressional Research Service report, Russia has dramatically expanded its military footprint in recent years, establishing “new Arctic commands, new Arctic brigades, refurbished airfields and other infrastructure, deep water ports, new military bases along its Arctic coastline, an effort to establish air defense and coastal missile systems, early warning radars, and a variety of other things along the Arctic coastline.”

China has also entered the arena, deploying an icebreaker to the region, establishing research stations in Iceland and Norway, and is reportedly considering deploying submarines to the Arctic as a deterrent against nuclear attack.

And the United States has also beefed up its Arctic military presence, reestablishing the 2nd Fleet for North Atlantic and Arctic operations, initiating freedom of navigation operations in Arctic waters, deploying B1-B bombers to Norway, and mobilizing NATO countries to enhance their own military deployments to the region.

The growing intensity of this jockeying for wealth, power, and security is attributable to two factors. At one level, it is the product of increased access to the region’s vast natural resources. The accelerating rate of melting sea ice has opened up new sea lanes through the region and increased accessibility to the vast resources it contains. And these resources are indeed vast. Various studies show that the Arctic contains an estimated 22 percent of the world’s undiscovered fossil fuel resources, with perhaps 90 billion barrels of oil and 1,670 trillion cubic feet of natural gas located beneath the region’s disputed international waters. Even if these estimates turn out not to be exactly right, there is no denying that the Arctic contains some of the world’s largest untapped oil and gas reserves. Nor can there be much doubt that states in and beyond the region would like to access and exploit those reserves.

Perhaps most fundamentally, however, the growing tensions in the Arctic are simply the result of great power rivalry in a space that each considers increasingly important to its national interest. In other words, they are products of the clashing Arctic visions of the great Arctic and “near Arctic” powers: the United States, Russia, and China.

The most recent U.S. Department of Defense Arctic Strategy report succinctly summarizes the United States’ Arctic vision, highlighting both American interests in the Arctic and the perceived threats to those interests. Among the key interests it identifies are defending U.S. sovereignty and the sovereignty of American allies; maintaining flexibility for global power projection; ensuring freedom of navigation and overflight; and maintaining a rules-based regional order that ensures continued access to the Arctic for legitimate civilian, commercial, and military purposes. The principal threats to those interests are identified as Russia and China, both of which are deemed to be “pursuing activities and capabilities in the Arctic that may present risks to the homeland,” and “challenging the rules-based order in the Arctic.” While Russia is singled out for its attempts to regulate passage through the Northern Sea Route—a crucial sea lane which lies in Arctic waters off Russia’s northern coast—China is described as “attempting to gain a role in the Arctic in ways that may undermine international rules and norms.” The report also expresses concern that the activities of these two countries in the Arctic threaten to undermine “US strategic objectives related to competition with China and Russia in the Indo-Pacific and Europe.”

Moscow, too, has made clear both its interests and threat perceptions with respect to the Arctic. On March 6, 2020, Russian President Vladimir Putin approved the “Basic Principles of Russian Federation State Policy in the Arctic to 2035.” The new policy document defines Russia’s Arctic interests and goals, as well as it Arctic strategy for the next fifteen years. Among the document’s highlights are its identification of the Arctic as a major source of Russia’s economic growth, its labeling of the Northern Sea Route as “a globally competitive national transport corridor,” and its explicit elevation of Russia’s “sovereignty and territorial integrity” as its top national interest in the Arctic region. The Basic Principles document also identifies the principal threats to these interests: “some countries’” attempts to revise unilaterally provisions of international treaties regulating economic and other activities in the Arctic, “some countries’” obstruction of Russian economic or other activities in the Arctic, and the increasing military presence and activities of NATO in the region.

And then there’s China. In January 2018, China introduced its Arctic Policy, which declared that China is a “Near Arctic” state. The document goes on to call for greater Chinese participation in the development of Arctic shipping routes as part of a so-called “Polar Silk Road,” expanded “resource exploration and exploitation” in the region, and a greater role for China in regional forums. China also envisions a greater role for the Chinese military in securing China’s polar interests. Simply put, China sees itself as an active participant and major stakeholder in Arctic affairs. It also recognizes that it needs to develop the power projection capabilities—forces, basing infrastructure, etc.—that would enable it to fulfill its Arctic vocation.

These visions are clearly incompatible. And while there may be a way to manage some of them within regional governance forums like the Arctic Council, they are not going to be somehow resolved or negotiated away. Rather, as the economic and geopolitical stakes grow larger, the interaction of these competing and conflicting visions is likely to produce even more friction, more contention, and perhaps even outright hostilities. It is this latter possibility—that the coldest Cold War might turn hot—that presidents Joe Biden, Vladimir Putin, and Xi Jinping need to bear in mind as they act on their respective Arctic visions in the years to come.

Andrew A. Latham is a Professor of Political Science at Macalester College.