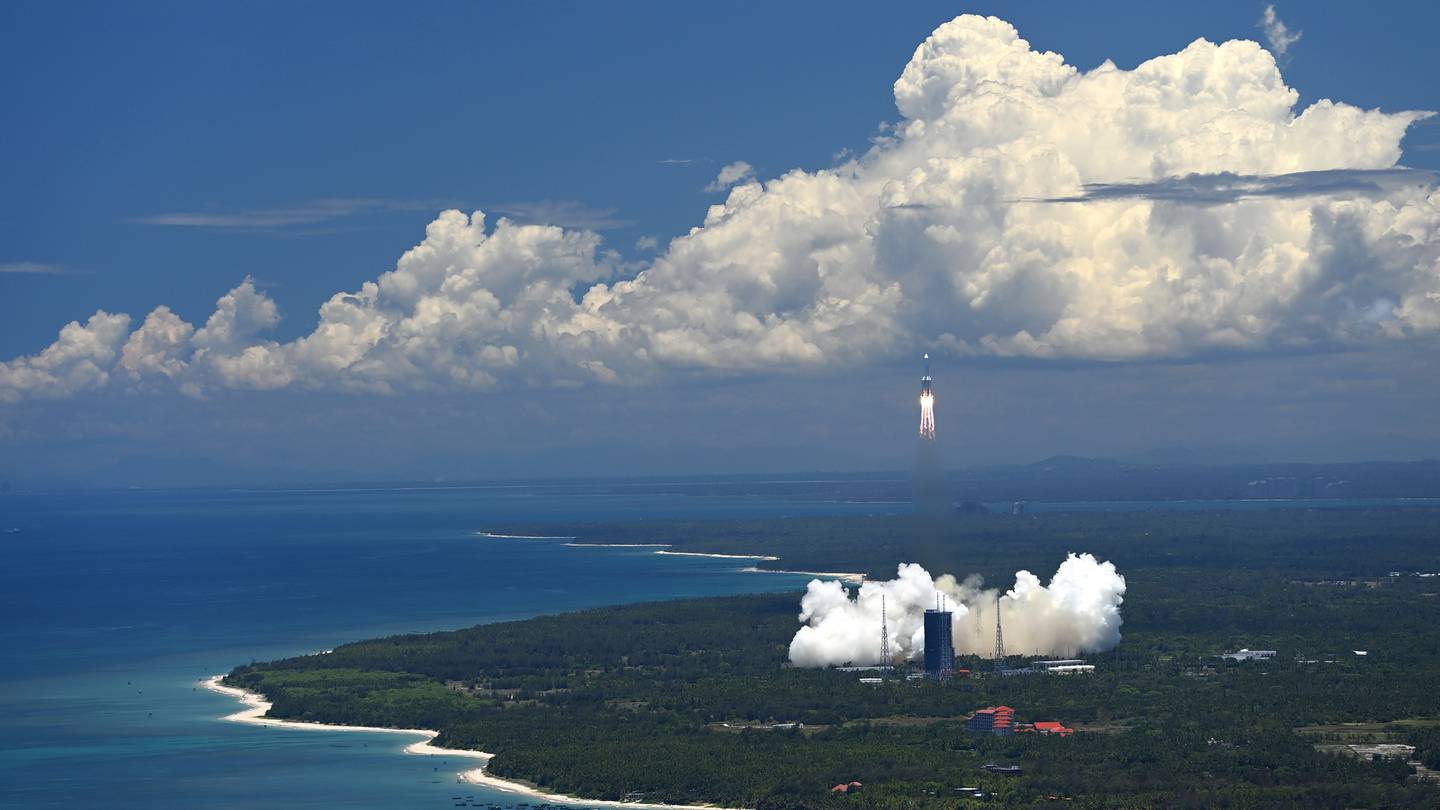 China’s Tianwen-1 probe has sent back its first image of Mars, the national space agency said, as rival missions from the United States and United Arab Emirates follow close on its tail.

Mars is about to be at the centre of an extraordinary confluence of interplanetary missions unprecedented in the history of space-faring.

Probes sent by three countries will arrive within days of each other as the US, China, and the surging UAE space programme take advantage of a window in which the Red Planet is close to Earth.

The black-and-white photo released late Friday by the China National Space Administration showed geological features including the Schiaparelli crater and the Valles Marineris, a vast stretch of canyons on the Martian surface.

The robotic craft ignited one of its engines to “make an orbital correction” Friday and was expected to slow down before being “captured by Martian gravity” around February 10, the agency said.

It will follow the UAE’s Hope mission, which will be the first of the three to arrive in Martian orbit on February 9, and then joined by Nasa’s massive, car-sized Perseverance lander a week after that.

The chance to reach Mars happens about every 26 months when its orbit lines up with Earth, and all three missions took advantage by launching in July.

It will see the UAE and China become the fifth and sixth space programmes to reach Earth’s nearest neighbour.

They follow Nasa, the Soviet Union, the European Space Agency and India.

After watching the US and the Soviet Union lead the way during the Cold War, China has poured billions of dollars into its military-led space programme.

It has made huge strides in the past decade, sending a human into space in 2003.

The Asian powerhouse has laid the groundwork to assemble a space station by 2022 and gain a permanent foothold in Earth orbit – but Mars has proved a challenging target.

The planet has become known as the Bermuda Triangle of space exploration as more than half of the missions sent there have failed.

The UAE’s Hope mission will arrive at 120,998km/h then fire its thrusters for 30 minutes, slowing to 18,000km/h and moving into Martian orbit.

It will spend two years orbiting the planet and studying its weather.

Pete Withnell, Hope programme manager, said: “I’m optimistic. But I can tell you many of the team are waking up at 2am in a cold sweat just thinking and rethinking about aspects.”

Once China’s five-ton probe goes into orbit it will start readying to land a solar-powered 227kg rover on the surface, which is expected to happen in May.

Tianwen – which means “questions to heaven” – will look for water-ice and make maps.

On February 18 Nasa’s Perseverance rover will arrive and head straight for the Martian surface.

It will streak across the Martian sky at 19,312km/h in what Nasa has called “seven minutes of terror” before slowing itself down by deploying a 21m wide parachute.

Perseverance will be the first Earth-sent machine to land on Mars since 2018.

It will touch down in the potentially treacherous Jezero crater, which is filled with boulders.

The crater was chosen because three billion years ago it was home to a river delta, and Perseverance will search for signs of ancient life.

It is fitted with cameras to film its own landing, and microphones so viewers on Earth will be able to hear muffled sounds from Mars.

The entire landing will be automatic as radio signals take 11 minutes to reach Earth.

Lori Glaze, of Nasa’s planetary science division, said: “We’re going to be able to watch ourselves land for the first time on another planet.”

The plutonium-powered, six-wheeled Perseverance will also bring a mini-helicopter called Ingenuity, which will be used to test flying conditions on Mars.

Nasa systems engineer Allen Chen said: “Success is never assured, and that’s especially true when we’re trying to land the biggest, heaviest and most complicated rover we’ve ever built to the most dangerous site we’ve ever attempted to land on.

“Jezero Crater is a great place, a magnificent place for science. But when I look at it from a landing perspective, I see danger. It’s a formidable challenge.”

If it lands successfully Perseverance will drill out half-ounce rock samples which Nasa ultimately hopes to bring back to Earth a decade from now on a later mission.

Nasa said the pandemic has complicated the journey to Mars but its scientists would still celebrate in traditional style at mission control when the rover lands.

Perseverance deputy project manager Matt Wallace said: “I don’t think that Covid is going to be able to stop us from jumping up and down and fist bumping.”