by David Smith, The Guardian

America was shaken on Wednesday as a mob of Donald Trump supporters staged an insurrection at the US Capitol building in Washington, storming the debating chambers and fighting police in clashes that left one person dead.

The siege was among the worst security breaches in American history and came after Trump had earlier urged a crowd of protesters to march on the Capitol and undo his November election defeat. 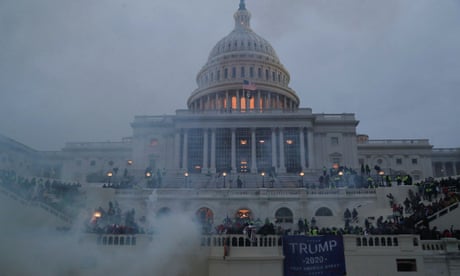 The violence halted the tallying of electoral college votes to affirm Joe Biden’s victory. Mike Pence, the vice-president, and members of Congress were evacuated to undisclosed locations for their own safety.

Local police said one person had been shot inside the Capitol building. Later, Dustin Sternbeck, a spokesman for the DC police, told the Washington Post that the woman had died.

In a sombre televised address while the mob was still massed on the Capitol steps, Biden, the president-elect, condemned the mayhem. “This is not dissent,” he said. “It’s disorder, it’s chaos, it borders on sedition and it must end now.”

The Capitol dome is known worldwide as a political symbol and the House of Representatives and Senate chambers are revered as almost sacred. But Wednesday’s carnage struck the latest and perhaps most savage blow to the America’s reputation as a paragon of liberal democracy.

Thousands of rioters gathered on the Capitol steps wielding flags including “Make America great again”, “Liberty or death: don’t tread on me” and the pro-south confederacy. Some broke down barriers and barged through police lines to enter the building, chanting “USA! USA!”, smashing windows, wandering halls and corridors and occupying offices with impunity.

One reached the Senate dais and yelled, “Trump won that election!” Protesters stormed the offices of the House speaker, Nancy Pelosi, knocking over tables and ripping photos off the walls. A photograph appeared to show one of them sitting contemptuously with his foot on Pelosi’s desk.

One stunning picture showed security forces inside the House chamber pointing guns at protesters through a broken window as if under siege. Another captured protesters lying face down on the floor as police pointed weapons at them.

Robert Contee, the chief of the Metropolitan police department, said there had so far been 13 arrests related to the ‘‘riot”.

Separately, an FBI spokeswoman said two explosive devices had been made safe.

Having lit the political fire, Trump made a belated plea for calm but repeated the lie that the election was rigged. “I know your pain, I know your hurt,” he said. “We had an election that was stolen from us.

Trump’s repeated claims of election fraud forced unprecedented enforcement actions by social media companies. Twitter and Facebooklocked Trump out of his accounts, and both platforms removed several posts from the president that cast doubt on the election results and praised his supporters.

Biden struck a very different tone in his remarks. “At this hour, our democracy’s under unprecedented assault, unlike anything we’ve seen in modern times… The scenes of chaos at the Capitol do not represent the true America, do not represent who we are. What we’re seeing are a small number of extremists dedicated to lawlessness.”

He added: “I call on President Trump to go on national television now to fulfill his oath and defend the constitution and demand an end to this siege. It’s not protest. It’s insurrection.”

Reinforcements were called in. The Washington DC mayor, Muriel Bowser, activated the national guard and issued a citywide curfew in from 6pm on Wednesday until 6am Thursday. Ralph Northam, the governor of neighbouring Virginia, announced that he would send members of the Virginia national guard and 200 state troopers.

I call on President Trump to go on television now to demand an end to this siege. It’s not protest. It’s insurrection

It was not until early evening, almost four hours after violent pro-Trump occupiers disrupted the electoral count, that officials declared the Capitol “secure”. The certification of electoral college votes resumed later Wednesday night.

“To those who wreaked havoc in our Capitol today: You did not win,” Pence said as the proceedings restarted. “Violence never wins. Freedom wins. And this is still the people’s house.”

The Senate minority leader, Chuck Schumer, called for the “goons” and “thugs” and “domestic terrorists” who stormed the Capitol to be “prosecuted to the full extent of the law”.

“This mob was in good part president Trump’s doing, incited by his words and his lies,” Schumer said.

Wednesday’s chaos provoked alarm and revulsion around the world. Jens Stoltenberg, the secretary general of Nato, tweeted: “Shocking scenes in Washington DC. The outcome of this democratic election must be respected.”

Boris Johnson, the British prime minister, called the scenes “disgraceful”, adding: “The United States stands for democracy around the world and it is now vital that there should be a peaceful and orderly transfer of power.”

The carnage unfolded after Trump, due to leave office on 20 January, earlier in the day addressed thousands of protesters on a grassy expanse near the White House called the Ellipse, repeating false claims that the election was stolen from him due to widespread election fraud and irregularities.

“We will never give up,” said Trump, who has spent years inciting anger and conspiracy theories. “We will never concede. It doesn’t happen. You don’t concede when there’s theft involved.”

Members of the House and Senate were then debating objections to the results by Trump’s allies. The president had pressures Pence to throw out election results in states he narrowly lost, but Pence publicly acknowledged that he has no such power.

Mitch McConnell, the Republican majority leader in the Senate, denounced the effort, warning: “If this election were overturned by mere allegations from the losing side, our democracy would enter a death spiral.”

But the mob forced an abrupt halt to proceedings. As rioters shouted while marching through the halls, people inside the chambers were directed to duck under their seats for cover and put on gas masks after tear gas was used in the Capitol rotunda. Fortunately a Senate aide remembered to take the electoral college documents with him as he evacuated the chamber.

The building was locked down as law enforcement battled to regain control. Questions swirled over how the rioters were able to get so far with such little resistance in contrast to the heavy handed crackdown on peaceful Black Lives Matter marchers last summer.

Richard Blumenthal, a Democratic senator for Connecticut, said: “My staff and I are safe at a secure location. I am absolutely sickened by scenes of anarchist mobs violently swarming the Capitol. It’s not a protest – it’s armed insurrection.

“This is an assault on the heart of our democracy incited and fueled by the President of the United States and his enablers. Make no mistake: Congress will do its job. This election will still be certified, and President-elect Biden and Vice President-elect Harris will be sworn in on January 20.”

Former president George W Bush condemned what he called “insurrection”, saying in a statement: “This is how election results are disputed in a banana republic – not our democratic republic. I am appalled by the reckless behavior of some political leaders since the election and by the lack of respect shown today for our institutions, our traditions, and our law enforcement.”