At least 33 countries have reported cases of the new, possibly more infectious coronavirus variant from the UK

Home/News/At least 33 countries have reported cases of the new, possibly more infectious coronavirus variant from the UK
Previous Next

At least 33 countries have reported cases of the new, possibly more infectious coronavirus variant from the UK 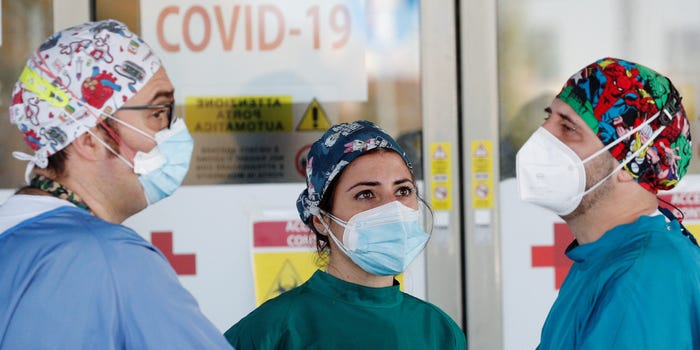 Doctors wait for patients to arrive at the Policlinico Tor Vergata hospital where patients suffering from the coronavirus disease (COVID-19) are being treated in Rome, Italy November 13, 2020.Guglielmo Mangiapane/Reuters

Reports of a new and possibly more contagious coronavirus variant have prompted panic in Europe and beyond.

The new variant of the virus, called B.1.1.7, was first detected in the UK in September but had since spread rapidly. British authorities formally identified the new variant around mid-December.

Prime Minister Boris Johnson cited one academic — Dr. Erik Voltz, a public health lecturer at Imperial College, London — saying the variant could be up to 70% more transmissible. But Volz has himself said that “it’s really too early to tell” how transmissible it is, “but from what we see so far, it is growing very quickly.”

Viruses are typically expected to mutate, and variants aren’t necessarily more harmful. Experts have also said that COVID-19 vaccines should still work against the new variant.

The mutation has triggered some countries to close their borders and tighten travel restrictions even further.

From Japan to Finland, scroll down to see the rapidly growing list of countries where the new coronavirus strain has been identified.

The UK was the first country to report the new variant of the coronavirus back in September.

Earlier this month, the country’s health minister Matt Hancock said the new variant was “getting out of control,” prompting the government to put millions of people under stricter lockdown measures and a host of countries to block travel from the UK.

The Netherlands was one of the first European countries after the UK to announce that it found the new virus variant.

France detected its first case of a new variant on Christmas Day.

The individual was a French national who returned from London, authorities said.

Swedish authorities detected the new strain after a traveler from the UK fell ill on arrival and tested positive, Sweden’s health agency said on December 26.

The infected individual has been kept isolated and no other cases have been reported so far.

Four cases of the new coronavirus variant were confirmed in Spain, health authorities said on December 26. All involve people who recently arrived from the UK.

“The patients are not seriously ill. We know that this strain is more transmissible, but it does not cause more serious illness,” said Madrid’s regional government’s deputy health chief, Antonio Zapatero, according to The Guardian.

“There is no need for alarm.”

Two of the patients lived in the UK but had been visiting the country.

“All close contacts have been identified and quarantined,” a FOPH spokeswoman said, according to Swiss Info.

Switzerland is the only European country keeping its ski slopes open to tourism over the Christmas and New Year period.

German health officials said on December 29 that the new coronavirus variant had been in the country since November.

They said the variant was found in an elderly patient with underlying health conditions, who has since died.

The country also recorded a case of the new variant in a woman who flew into Frankfurt from London Heathrow, and who tested positive on December 20.

Source: The Guardian, The Local

Italian officials said they identified the strain in a couple who flew from the UK to Rome.

A couple in Ontario, Canada, tested positive for the new strain of the virus on December 26.

They had no known travel history or high-risk contacts and are now in self-isolation, officials said.

Japan reported its first five cases of the virus variant on Christmas Day.

Officials also ordered a travel suspension from December 28, which is expected to run through January and temporarily ban non-resident foreign nationals from entering the country.

Japanese citizens and foreign residents will be allowed to enter but must show proof of a negative coronavirus test 72 hours before departing for Japan, and quarantine for two weeks upon arrival.

Lebanon’s health minister has said that a case of the new variant was detected on a flight arriving from London on December 21.

Hamad Hassan urged all passengers on the flight to take precautionary measures.

Singapore’s health ministry confirmed on December 24 that it too had one case of the new coronavirus variant.

Two cases of the new variant were detected in New South Wales, Australia, after a flight arrived from the UK, the state’s chief health officer Kerry Chant said.

A government official of the United Arab Emirates said on Tuesday that a “limited number” of cases of the new UK coronavirus variant had been found.

The offical said the cases had come from abroad, but did not specify a number or which countries they had come from.

India reported eight cases of the new variant on Tuesday December 29, all of them people returning to the country from the UK.

They have been put in isolation and their close contacts in quarantine.

India called a halt on all flights from the UK on December 23 until the end of the year.

Source: The Times of India

The Korea Disease Control and Prevention Agency announced on December 28 that South Korea had identified its first three cases of the new variant.

A family arriving from London on December 22 was found to have the variant and are isolating since.

Since the announcement, the government has signaled its intention to speed up the rollout of a vaccine, originally planned for the first quarter of 2021.

At least one Finnish citizen who recently returned from the UK tested positive for the new coronavirus strain over the weekend, health officials said Monday, December 28.

According to the BBC, the individual and their family are in isolation.

Pakistan announced on December 29 that six passengers who had flown from the UK were found with the new variant.

It is not clear when exactly they arrived in Pakistan, but the country had banned all flights from the UK since December 21.

In light of the new cases, Pakistan extended its travel ban from the UK until January 4, 2021.

Source: The Times of India

A man in Colorado became the first known US case of the newly identified strain of the coronavirus on Tuesday, December 29.

The man, who is in his 20s, had no travel history, state health officials said.

Last week, the Centers for Disease Control and Prevention (CDC) noted that the strain was likely already circulating through the country.

Turkish health minister Fahrettin Koca issued a statement on Friday saying that the country had found 15 people infected with the new strain, and placed them in isolation. All 15 recently traveled to Turkey from the UK.

The country found at least four cases of the new variant in early December, according to Agence France Presse.

“It’s not much, but it is not impossible that there are more,” Belgian Health Ministry spokesman Yves Van Laethem told AFP on December 22.

Chile became the first country in South America to report cases of the new coronavirus variant on Tuesday, when Undersecretary of Health Paula Daza reported that a Chilean woman traveling from the UK had tested positive, according to Reuters.

Health authorities have since reinstated a mandatory quarantine period for all travelers entering Chile.

The Mediterranean island nation reported three cases of the new variant on Wednesday.

Two of the cases have been linked to people who had traveled from the UK, while a third was still being investigated as of Wednesday, according to the Times of Malta.

The Norwegian Institute of Public Health said on Sunday that two cases of the novel variant had been identified in travelers from the UK.

Norway had placed travel restrictions on people from Britain earlier this month over concerns about the strain.

As of December 21, at least 18 cases of the novel strain had been detected on the island of Madeira, an autonomous region of Portugal, according to Macau Business.

The country reported its first case of the novel variant on Wednesday in China CDC Weekly, a publication run by the Chinese Center for Disease Control and Prevention.

The patient, a 23-year-old student returning to China from the UK, was tested on December 14 in Shanghai, Reuters reported.

Taiwanese Health Minister Chen Shih-chung said on Wednesday that three passengers traveling from the UK, including a 10-year-old boy, had tested positive for the new strain.

As of Friday, Taiwan has banned most travelers from entering the country.

The Icelandic National Broadcasting Service reported on Tuesday that 11 people traveling into the country had been diagnosed with the new strain before Christmas. Of them, 10 had traveled from the UK, and one from Denmark.

Irish Prime Minister Micheal Martin said in a televised address on Wednesday that the new variant was “spreading at a rate that has surpassed the most pessimistic models available to us.”

He added: “While international research for this new variant is ongoing, it is already very clear that we are dealing with a strain of the disease that spreads much, much more quickly.”

The country had confirmed at least six cases of the new strain by Christmas, according to The Times of Israel.

Medical researchers have detected dozens more suspected cases in labs, suggesting the variant may be spreading quickly within the country.

Jordan announced its first two cases of the mutated strain on Sunday. Health Minister Nazir Obeidat said the two infected people had recently traveled from the UK, and said both were in “excellent health,” according to Arab News.

The UK announced on December 23 that it had found a different, possibly more infectious coronavirus variant originating from South Africa.

And on December 24, Nigeria reported another variant of the virus, separate from the ones found in the UK and South Africa.

John Nkengasong, the head of the Africa Centers for Disease Control and Prevention, said that health officials were analyzing more samples and that little is known so far about that variant.

“Give us some time … it’s still very early,” Nkengasong said.