Trump orders US to pull troops from Somalia

by Julian Borger, The Guardian

Trump orders US to pull troops from Somalia 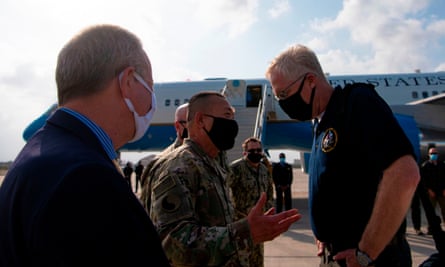 The US will pull out nearly all its estimated 700 troops in Somalia over the next few months, the latest in a series of short-notice withdrawals ordered by Donald Trump in his last few weeks in power.

A Pentagon statement on Friday said that some of the troops would be repositioned in neighbouring countries while others – it did not say how many – would leave the region altogether.

“The US is not withdrawing or disengaging from Africa. We remain committed to our African partners and enduring support through a whole-of-government approach,” the statement said. “While a change in force posture, this action is not a change in US policy. We will continue to degrade violent extremist organizations that could threaten our homeland while ensuring we maintain our strategic advantage in great power competition.”

The decision triggered dismay on Saturday from some Somalis, who appealed to the incoming US president to reverse the decision.

“The US decision to pull troops out of Somalia at this critical stage in the successful fight against al-Shabaab and their global terrorist network is extremely regrettable,” Somali senator Ayub Ismail Yusuf said in a statement, referring to the al-Qaida-linked al-Shabaab insurgency.

“US troops have made a huge contribution and had great impact on the training and operational effectiveness of Somali soldiers,” said Yusuf, a member of Somalia’s senate foreign affairs committee.

He tagged US president-elect Joe Biden in a tweet criticising the decision. The Somali government could not immediately be reached for comment early on Saturday to Friday’s decision.

Most US troops are in Somalia to train the country’s special forces unit Danab to fight al-Shabaab extremists.

If the withdrawal is permanent, “it will have a huge toll on counterterrorism efforts,” said Col Ahmed Abdullahi Sheikh, who served for three years until 2019 as the Danab commander.

He fought alongside US forces, he said, and during his command two Americans and more than a hundred of his own men had died. Both US and Somali forces opposed the withdrawal, he said.

The announcement comes a month after a CIA officer died during a failed raid targeting an al-Shabaab bombmaker. But the withdrawal order also fits a pattern of Trump’s lame duck period. He also ordered force levels in Afghanistan and Iraq cut to 2,500 in each country by mid-January, a few days before Joe Biden enters the White House.

Analysts have suggested the main motive is to be able to claim to have fulfilled his campaign promise to stop America’s “endless wars”, while leaving the messy consequences of rushed withdrawals to his successor.

“Al-Shabaab will see the US drawdown as a victory, a critical step in its mission to expel foreign forces from Somalia and seize control of Somalia,” said Tricia Bacon, a former state department expert on Somalia and counterterrorism, now an associate professor at American University. “The US drawdown will hinder Danab in particular, which has been the most effective Somali force against al-Shabaab, in significant part because of US support.”

“This is a decision that would be prudently left to the incoming administration, rather than done in the final days of the outgoing one,” Bacon said.

Jim Langevin, the Democratic chair of the House subcommittee on intelligence and emerging threats, denounced the withdrawal as “a surrender to al-Qaida and a gift to China”.

Benjamin Friedman, the policy director of the Defense Priorities thinktank, welcomed the move as a step in the right direction in reducing US exposure abroad.

“It seems to be a shift away from a broader effort to fight on behalf of the Somali government against al-Shabaab to a more focused counter-terrorism mission,” Friedman said. “But the change is not necessarily a step toward ending American military involvement in Somalia’s civil war.”