by Martin Pengelly, The Guardian

Barack Obama would not take a position in Joe Biden’s cabinet if the president-elect offered it – because if he did, he fears, Michelle Obama would leave him.

The 44th president made the remark in an interview with CBS Sunday Morning, two days ahead of publication of his memoir, A Promised Land. He was due to speak to CBS again, for 60 Minutes, on Sunday night.

Biden, Obama’s vice-president from 2009 to 2017, is preparing to become the 46th president in January, having defeated Donald Trump at the polls.

Asked how he will help Biden, Obama said: “He doesn’t need my advice, and I will help him in any ways that I can. Now, I’m not planning to suddenly work on the White House staff or something.”

Susan Rice and Michelle Flournoy are among Obama administration veterans reportedly being considered for key posts under Biden.

Asked if he would consider a cabinet position, Obama said: “There are some things I would not be doing because Michelle would leave me. She’d be like, what? You’re doing what?”

The Obamas have enough to occupy their time as it is, not least through establishing a charitable foundation and fulfilling a production deal with Netflix.

In his book, Obama considers what his meteoric rise to the US Senate and then the White House meant for his marriage to Michelle and family life with their daughters, Sasha and Malia.

“My career in politics, with its prolonged absences, had made it even tougher” for his wife to pursue her own law career, he writes. “More than once Michelle had decided not to pursue an opportunity that excited her but would have demanded too much time away from the girls.

“… With my election [as president] she’d been forced to give up a job with real impact for a role [as first lady] that – in its original design, at least – was far too small for her gifts.”

The Obamas’ literary gifts have at least paid off. A Promised Land is part of a reported $65m deal with Penguin Random House that also covered Becoming, Michelle Obama’s memoir, released in 2018, and which has sold more than 10m copies. The former president is expected to produce a second volume.

He also discussed the first with Oprah Winfrey, for Apple TV in an interview scheduled to broadcast in full on Tuesday.

In a released clip, Obama told Winfrey he and Michelle “went through our rough patches in the White House, as she’s written about, she’s talked about. But I tell you that the thing that I think we were good about was talking stuff through, never losing fundamental love and respect for each other, and prioritising our kids.” 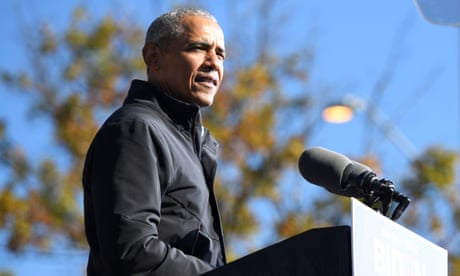 Though Trump shows no sign of willingly giving up power, his memoirs are already the subject of speculation – and a rumoured $100m price tag.

Another passage of Obama’s CBS interview might have had resonance for the current president, had he been watching.

Obama discussed what it is like to have the luxurious trappings of office, in this instance the presidential motorcade, inevitably taken away.

“I’m driving along,” Obama said, laughing. “I’m still not driving, but [I’m] in the car. I’m in the car in the backseat and I’m looking at my iPad or something. And suddenly, we stop and I’m like, ‘What’s going on?’ There’s a red light. There’s a car right next to us. Some kids are eating a burrito or something in the backseat.