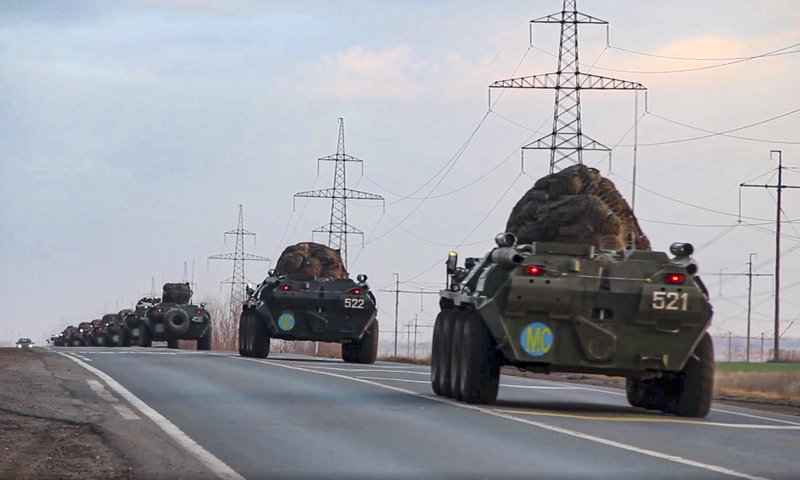 This photo made from the footage provided by Russian Defense Ministry press service on in Tuesday, Nov. 10, 2020 shows Russian military vehicles carry peacekeepers on their way to an airport in unknown place in Russia. Scores of Russian peacekeepers were heading to Nagorno-Karabakh on Tuesday morning, hours after Armenia and Azerbaijan agreed to halt the fighting over the separatist region in a pact signed with Moscow which envisions the deployment of nearly 2,000 Russian peacekeepers and territorial concessions. (Russian Defense Ministry Press Service via AP)

MOSCOW (AP) — More than a dozen planes carrying Russian peacekeepers headed for Nagorno-Karabakh on Tuesday, hours after Armenia and Azerbaijan agreed to halt fighting over the separatist region and amid signs this cease-fire would hold where others hadn’t.

The truce came after significant advances by Azerbaijani forces that the Nagorno-Karabakh leader said made it impossible for their side to carry on — but angered many Armenians, who stormed government buildings overnight, demanding the Parliament invalidate the agreement. Dozens of protesters gathered again Tuesday morning in front of the parliament building in the Armenian capital of Yerevan.

Armenia and Azerbaijan have been locked in a conflict over Nagorno-Karabakh for decades. The region lies within Azerbaijan but has been under control of ethnic Armenian forces backed by Armenia since a separatist war there ended in 1994. Heavy fighting erupted in late September — the biggest escalation of the conflict in a quarter-century — and has left hundreds, possibly thousands, dead.

Several cease-fires announced over the past six weeks crumbled almost immediately, but the current agreement appeared to be holding, with neither side reporting any more fighting since it came into force.

It came days after Azerbaijan pressed its offensive deeper into the region and took control of the city of Shushi, which is strategically positioned on heights overlooking the regional capital of Stepanakert.

Armenian Prime Minister Nikol Pashinian said on Facebook that calling an end to the fight was “extremely painful for me personally and for our people.”

But on Tuesday he explained that he was left with no choice, saying the army had told him it was necessary.

“We found ourselves in a situation when there was no alternative to signing the agreement,” Pashinian was quoted by Russia’s Interfax news agency as saying.

Nagorno-Karabakh’s separatist leader Arayik Harutyunyan echoed Pashinian’s sentiment. He said: “Had the hostilities continued at the same pace, we would have lost all of Artsakh (an Armenian name for Nagorno-Karabakh) within days.”

Azerbaijani President Ilham Aliyev referred to the agreement as a “glorious victory” on Twitter, and Azerbaijanis flooded their capital city to celebrate.

Russia’s Defense Ministry said that 15 planes carrying peacekeepers and military equipment departed for the region Tuesday. A total of 1,960 Russian peacekeepers are to be deployed in Nagorno-Karabakh under a five-year mandate.