Home/Analysis/What are New Zealand’s trade prospects under the new US presidency?
Previous Next

Analysis – New Zealand, an export-led economy and import-led culture, has long been a tad confused when it comes to new presidencies and the country’s best interests. 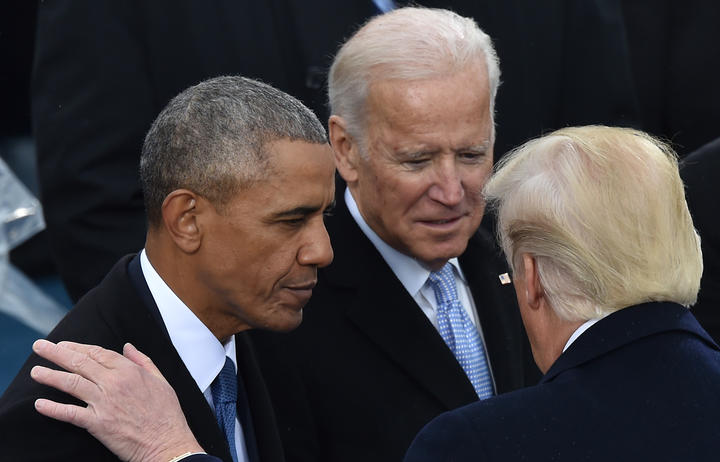 Barack Obama and Joe Biden speak with Donald Trump at his inauguration in January 2017. Photo: AFP or licensors

Republican presidents, who at least tend to pay lip service to New Zealand-style free trade, are usually too conservative for most local tastes.

With Democrat administrations, it’s the other way around. They may be politically cuddlier, but are generally less keen to see too much imported lamb dishes appearing on the Capitol Hill menus.

Stateside presidential victories have therefore tended to be seen by the Kiwis as a consolation prize of sorts: either it’s a somewhat unappealing new president whose trade heart is in the right place or else somebody new who’s politically appealing, but.

Surprisingly, this week’s victory for Joe Biden may yet be positive on both fronts.

That’s surprising on the face of it, because Biden will be the first Democratic president in more than a half-century to enter the White House without a Senate majority and the first new national Democrat leader to begin his first term without full control of both chambers of the US Congress since the late 1800s.

He will have his work cut out to achieve anything meaningfully new on the trade front.

The president-elect options for resurrecting the abandoned Trans-Pacific Partnership Agreement that New Zealand leaders made much of, say, may not be all that great, as are his prospects for fully mending the Sino-American trade relationship that crumpled on the watch his rambunctious predecessor.

In one particular area, however, the news would appear upbeat: New Zealand can probably expect to see a bit of new life breathed into the World Trade Organisation, if not in terms of the actual structure then certainly in the multilateral style it represented.

The WTO was, after all, established during a previous Democratic presidency. The last Democrat administration continued to give its political blessing to the multilateral body, which has already had one New Zealand leader – former prime minister Mike Moore – and has served local interests notably well.

At the heart of the WTO operation is a rules-based dispute-settlement system that allows for trade squabbles to be kept separate from diplomatic relationships, which is a critical distinction for a small nation such as New Zealand.

The linchpin of this system has been an appeal function involving a seven-member appellant body that hears appeals on trade-related matters after they are first weighed up by a three-member panel.

Under this system, New Zealand has done notably well both in terms of winning various cases as well as getting picked to help resolve differences between other nations. Among the best known of these would probably be the legal victory over Australia on the question of allowing New Zealand local apple growers better access to their market.

On the watch of the unilaterally minded Trump administration, however, that style of doing business has not been the style. Many key positions within the adjudication system have been left vacant. Cases have taken far longer to be heard (if at all), and the once-dynamic organisation itself has started to seem as aimless as it has been leaderless.

In the meantime, with or without a pandemic, the global trading system represented by the WTO has been frozen, if not experiencing death throes.

Shortly before his own death, Mike Moore told this writer that the body he once led was now in “real danger” of collapse. This could only be bad news for New Zealand as it sought to make its case against tariffs, quotas and variable levies into the American, European and Japanese markets, Moore said.

“Small countries like New Zealand need the rules,” he added with some gusto – and probably would have said with some relief had he been around this week.

While the organisation may yet be beyond repair, the multilateralism it represented will be closer to the president-elect’s political heart. Good news for New Zealand indeed.

* David Cohen is a Wellington journalist who writes frequently on trade matters.