by Christos A. Makridis, The National Interest

A democratic and economically robust Sudan is an incredible asset for Western democracies in Northern Africa. 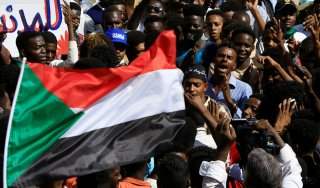 Ever since the first terrorist attack against the World Trade Center in 1993, the United States has designated Sudan as a state sponsor of terrorism. However, since then, particularly over the past year and a half, Sudan has undergone significant democratic reforms, including a recent victory and step towards internal peace and stability in Juba, South Sudan.

Even former Obama Administration officials agree with the move. Cameron Hudson remarked that “[Sudan] needs to have this label removed… Sudan’s designation as a state sponsor of terrorism is a ‘vestige’ of its past.” And, the 9/11 Commission, an independent and bipartisan body, concluded that Sudan was not responsible, expropriating all of Osama bin Ladin’s assets when he left in 1996.

In a historic move, President Donald Trump announced on Monday that the State Department would remove Sudan from the list of state sponsors of terrorism, in addition to unleashing new, sweeping economic and humanitarian assistance to continue their economic development plans. In response, Sudan is also formalizing plans to normalize their relations with Israel.

The move comes at an especially important time. Although Sudan has undergone major democratic reforms and worked hard to expel terrorist links, the sanctions that had been in place since 1993 were crippling its economic and investment activities. According to Prime Minister, Abdalla Hamdok, “there was no guarantee the transition to democracy would stay on course until elections scheduled for 2022.” Hamdok’s detractors have been attacking him at every turn—even manifesting in an attempted assassination this past March.

Fortunately, President Trump’s decision, after many hours of negotiations and foundation-building through the Department of State and the National Security Council, comes after Senators Chuck Schumer and Bob Menendez blocked a Congressional measure to take Sudan off the list since they wanted to keep their options open for potential payouts from the Sudanese government to 9/11 victims, arguing that they were responsible for al-Qaeda’s build-up.

Absent the announcement, all the reforms that were made over the past year and a half would have slipped away. As some have rightly pointed out, the blacklisting means that legitimate Sudanese businesses, and the economy more generally, are unable to receive foreign direct investment and both the World Bank and the International Monetary Fund are unable to adjust their debt relief packages. Now, Sudan will ride on the wings of the Middle East peace deals that were negotiated last month, setting an example to its neighbors about the benefits of peace and democratic reform.

A democratic and economically robust Sudan is an incredible asset for Western democracies in Northern Africa. First, while China has traditionally had a strong hold on Sudan, particularly with former Sudanese President Omar al-Bashir, Beijing has distanced itself recently. Sudan can continue its reforms without relying on manipulative deals from the Chinese Communist Party (CCP).

Through the Belt and Road Initiative, the CCP has been angling for control over more land and resources. For example, Sudan has been put in the middle of a vicious grab for power between Egypt and Ethiopia, specifically over the Grand Ethiopian Renaissance Dam. In this sense, Sudan is positioned in a strategic location, especially when put in perspective of the surrounding failed states. Stability in Sudan will serve as an oasis of peace in a region marked by so much volatility and terrorist activity.

Second, given Sudan’s historical violations of religious freedom, it can become a beacon and textbook example for not only economic but also social and political reform that encourages similar efforts among neighbors. Already, they’ve made incredible progress, but continuing these efforts takes work. My research shows that improvements in religious liberty are incredibly important for human flourishing, leading to greater women empowerment, access to justice, civil liberties, and freedom of expression, which are all prerequisites for economic activity.

That’s exactly what’s been happening in Sudan over the past year: they’ve dropped the death penalty for apostasy, they’ve empowered women in the political process, and undertaken significant political reforms to root out corruption. These are all ingredients for economic development and flourishing.

While there has been bipartisan support for removing Sudan from the state sponsors of terrorism list, politics has gotten in the way for far too long. The road ahead is not easy, but now the stage is set for Sudan to continue its historical economic, social, and political reforms to become another light to the world. The tide is turning with the advent of the Middle East peace deals—and the good news from Sudan is yet another illustration of the possibilities that reside when we come together.

Christos A. Makridis is an assistant research professor at Arizona State University, a non-resident fellow at Baylor University, a visiting fellow at the Foundation for Defense of Democracies, and a senior adviser at Gallup. Christos previously served on the White House Council of Economic Advisers. Follow him on Twitter and Instagram @camakridis.