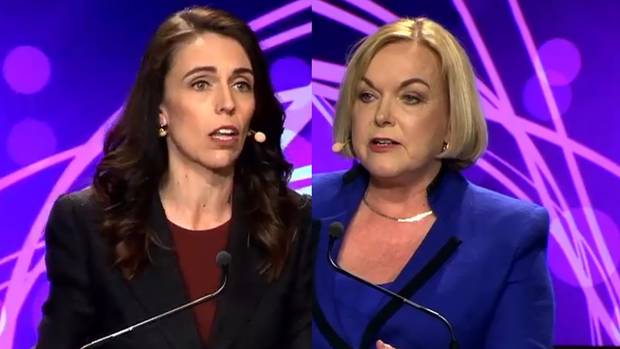 Labour’s support has stuck on 47 per cent in the latest 1 News Colmar Brunton poll, while National has slipped one point to 32 per cent.

Act is also still on 8 per cent while the Greens have dropped to 6 – close to the 5 per cent threshold.

NZ First has nudged up to 2 per cent, but still well short of the 5 per cent threshold despite leader Winston Peters’ predictions of a “surge”.

On these numbers Labour would be one seat shy of being able to govern alone.

Labour leader Jacinda Ardern’s popularity has taken a 4 per cent hit which sees her on a rating of 50 per cent in the preferred Prime Minister stakes compared with Judith Collins steady on 23 per cent.

Ardern said she was keeping an eye on the polling “but I’m pretty happy with those numbers”.

Collins said she believed it was still anybody’s race.

Green Party co-leader James Shaw said the numbers showed there was a risk of one party being able to form a Government alone.

Thirteen per cent of voters polled were still either undecided or would not say how they would vote.

On that poll result National would have 41 seats in Parliament – down from 54 now. Labour would have 60.

The percentage numbers have changed little since the last poll about a week ago.

The previous poll on September 28 showed Labour could no longer govern alone but could form a coalition with the Greens.

It showed that Labour was on 47 per cent of the party vote, National 33, Act 8, Greens 7, and NZ First fighting for survival on 1 per cent.

The latest poll comes after a tricky week for National leader Judith Collins.

There was the embarrassing leak of an email from National MP Denise Lee, in which she described Collins’ new local government policy as a “nightmare” and criticised the party’s culture under their new leader.

That put Collins on the back foot ahead of the third leaders’ debate in Christchurch, which she was widely considered to have lost to Prime Minister Jacinda Ardern.

She followed that with an awkward walkabout in Ponsonby, in which she was turned away from one store and met with party supporters posing as members of the public.

Collins was also in defensive mode after being accused of politicising her faith by praying in front of cameras in a church before casting her vote on the weekend.

These events overshadowed National’s big economic announcement, in which it promised to create at least 10,000 jobs a month and get unemployment back to 4 per cent by 2025.

Meanwhile, Ardern was able to announce – as Prime Minister – that community transmission of Covid-19 had been contained and Auckland could join the rest of the country in alert level 1.

She attracted large crowds on visits to Nelson, Lyttelton and Dunedin.

The policy was criticised by Labour’s governing partner the Greens, which said it was too weak to meet New Zealand’s international emissions obligations.