Analysis – Newmarket’s gold mile has lost a bit of its burnish these days, with a number having been sucked into the new Westfield mall and others closed due to the Covid-19 lockdowns. 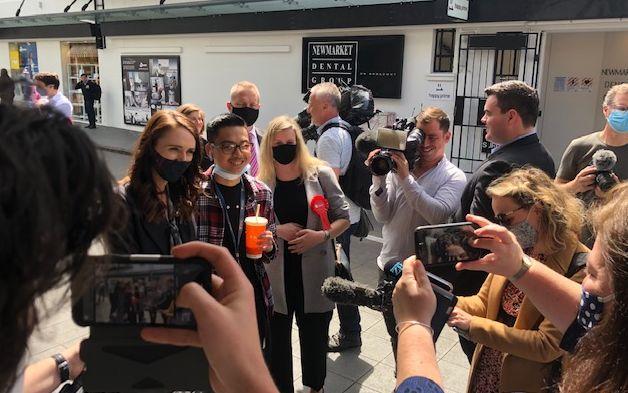 Labour leader Jacinda Ardern takes a photo with a member of the public in Newmarket, Auckland during the 2020 campaign trail. Photo: RNZ / Tim Watkin

And at first Jacinda Ardern, looking for a crowd to work after her housing announcement in Birkenhead yesterday morning, struggled to find one.

She walked down from the mall, with only one or two children there for the cooing. But when she hit Teed St it all changed.

She paused for a couple of quick chats and suddenly the wave washed over her. People wanted to smile, elbow bump and have their photo taken with her.

She spent the next 20 minutes there as a queue of fans formed, like they were waiting for a ride at Disneyland.

“We love you,” “you inspired me,” “I’m so proud of you,” and “thanks for what you’re doing for New Zealand” the people said, one after another.

One young Chinese New Zealander reminds her they met three years ago; she replies with details of that meeting, clearly remembering him. He is, of course, flattered.

One couple of women had just published their first children’s book and wanted a photo with her holding the book.

After the snap and a quick chat they literally skipped away from the meeting, tugging at each other, grins as wide as Ardern’s poll lead.

For all Judith Collins’ success in the two televised leaders’ debatesand her party’s burgeoning coherence in the past week, this is a reminder of what National and ACT are up against.

No Prime Minister has lost an election after a single, full term since Walter Nash in 1960. And he had to present a Black Budget to lose it.

It really is key to Labour’s ability to win again. Or should I say she is. Ardern’s crisis management over three years is still the defining feat of her administration’s first term. Her personality still spreads a glow over the entire party.

Speaking to journalists who have done walkabouts with Winston Peters and Judith Collins as well this campaign, they said “this is a whole other level.” Ardern has made an emotional connection with voters like few before her.

In truth, she will be thanking her lucky stars for it.

Without her glowing personal reputation and National’s implosions this year, Labour could well be at serious risk of following Nash into first-term failure.

If Ardern and her party were running on their track record alone, it would be a much tighter race.

In 2017, Ardern rode to victory on a commanding personal performance after her last minute replacement of Andrew Little, a tiring National party and three key policies that a sufficient number of New Zealanders were demanding action on. Housing, poverty and climate change.

In the three years since, the coalition she has led has struggled to get traction on any of the promises its dominant member made on those issues.

With housing, we all know Kiwibuild promised 100,000 houses in a decade and that last year Phil Twyford was sacked as Housing Minister as the party admitted it had failed.

Even in the second leaders’ Ardern was on the back foot over housing, saying again it had tried and failed to rapidly build more houses.

Labour’s housing policy released yesterday admits just 602 Kiwibuild homes have been built as of last month; estimates earlier this year had it taking 400 years to reach its 100,000 target at this year’s rate of building.

We also know that Ardern forever gave up on her promise to introduce a Capital Gains Tax, when she couldn’t win over New Zealand First.

But most people have forgotten another big housing promise – to abolish Auckland’s urban boundary, which Twyford blamed for helping “drive land and housing costs through the roof” and contributing to “a housing crisis that has allowed speculators to feast off the misery of Generation Rent.”

Auckland Council takes a different view and the boundary remains.

Worse, house prices nationally have risen a further 27 percent under a government that promised to fix the affordability “crisis” and this week the average asking price for a house in Auckland topped $1m. Rents are up 3.3 percent on the year to July.

And while more state houses are being built, the number of New Zealanders on the state house waiting list has leapt from 5844 to 19,438.

Prices, rent and waiting list all up and not nearly the 16,000 Kiwibuild houses that were promised to have been built by now.

Talking about promises of 100,000, Jacinda Ardern also made a bold one relating to child poverty in 2017.

On Morning Report Guyon Espiner asked her about her commitments on reducing child poverty.

Ardern: “Guyon my goal is to eradicate child poverty in NZ, so I’m happy to be ambitious about the targets”.

After a couple of questions about eradication, Espiner doubled back to the core promise.

Espiner: “I just want to clarify, are you committing this morning to lifting 100,000 children out of poverty by 2020?”

Ardern: “On 50 percent of the median income, yes.” 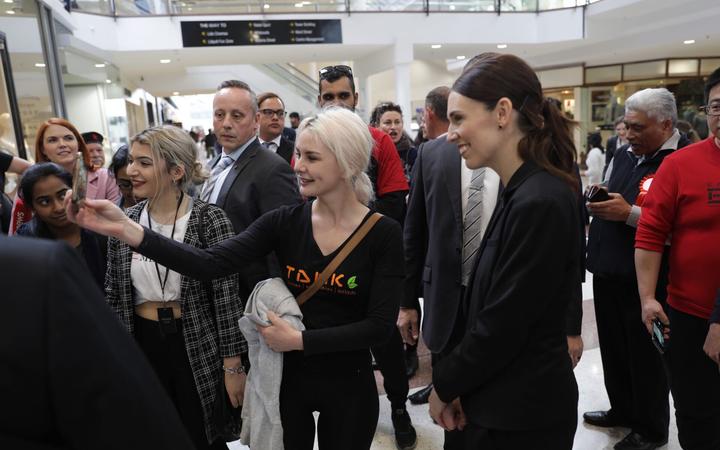 Labour Party leader Jacinda Ardern taking a selfie with a member of the public while campaigning in Hamilton. Photo: RNZ / Simon Rogers

The latest data we have is up until June 2019, which was released in February this year.

So is Labour on track to meet that 100,000 promise when the data for this year is released?

Not even close. As of June 2019, using the 50 percent measurement Ardern herself used (after housing costs), it had got 12,100 children out of poverty.

Labour may argue there is a lag time and that number will have been seen to have skyrocketed when the 2020 data is released.

But it’s worth noting that when the 2019 figures came out, economist Susan St John of the Child Poverty Action Group wrote: “This confirms our view that the Families Package (implemented July 2018) was not designed to give the necessary income boost to those in the deepest poverty. This picture is unlikely to change when the full Families Package is counted in the next report due in 2021.”

And what about climate change? The issue Ardern famously called her generation’s “nuclear-free moment.”

Labour and the Greens were able to pass the Zero Carbon Act, aiming for zero net carbon emissions by 2050. Yet for now emissions continue to rise and are on track to keep rising until 2025.

A plan for the government’s vehicle fleet to be emissions-free by mid-2025 is now being called a “laughable dream.”

Compared with other countries, New Zealand’s efforts to reach our Paris Agreement goals has been deemed “insufficient”.

At this election, Labour is headlining its promise of 100 percent renewable energy in New Zealand by 2030. We’re already at 84 percent, but it sounds good, right? Because it will lower emissions.

However, the government’s own Interim Climate Change Committee (ICCC) advised against it.

“Such a solution is very costly, particularly in terms of achieving the last few percent of renewable electricity,” the ICCC wrote.

Costly both to your back pocket and the environment.

You see the 100 percent goal could see residential electricity prices rise by 14 percent, the ICCC estimated. And the higher prices would slow the decarbonisation of the economy as a whole, meaning more emissions.

“The Committee recommends that the Government prioritises the accelerated electrification of transport and process heat over pursuing 100 percent renewable electricity by 2035 in a normal hydrological year because this could result in greater greenhouse gas emissions savings while keeping electricity prices affordable.”

Labour has ignored that advice.

So on its three key issues, Labour has failed to match its own promises and goals. Ardern reasonably points to New Zealand First as a handbrake on housing and climate.

She says her government has “made a good start” on these issues and needs more time. They remain her priorities. But the timeframes she gave were of her own making and she has failed to achieve them.

New Zealanders from today can vote on whether she and her team gets the more time she’s asking for.

As they head to the polls, the track record remains her greatest liability.

What I saw in Newmarket today, however, as people queued and gushed and snapped, is why she’s still hot favourite for a second term.