Gold & Recessions: What to Know This Time Around

Home/Analysis/Gold & Recessions: What to Know This Time Around
Previous Next

Gold & Recessions: What to Know This Time Around

With GDP posting a record low of -31.7% for Q2 2020,1the United States officially entered its first economic recession in over a decade. Gold is popularly associated with providing a potential hedge during economic downturns, so it’s not much of a surprise that it has risen 27% year to date and is on track to have its best year since 2010.2 Given continued uncertainty during this current recession, it may pay to not only focus on gold’s historical track record during these phases, but also to evaluate the key drivers supporting gold’s current outlook,3 which remain strong – even against the potential for a US economic recovery.

Gold Leads in the Recession Procession

The investing merit of gold during recessions is a common association, and as Figure 1 highlights, this is well earned. Since 1971, when gold began freely trading in the post-Bretton Woods era, the US has experienced seven economic recessions. During these periods, gold averaged a 20.19% return, which has led the way compared with other major US assets – including US stocks, Treasury bonds, corporate bonds, and the US dollar. Additionally, gold managed to provide positive returns and outperform broad commodities in all but one of those periods (1990-1991). 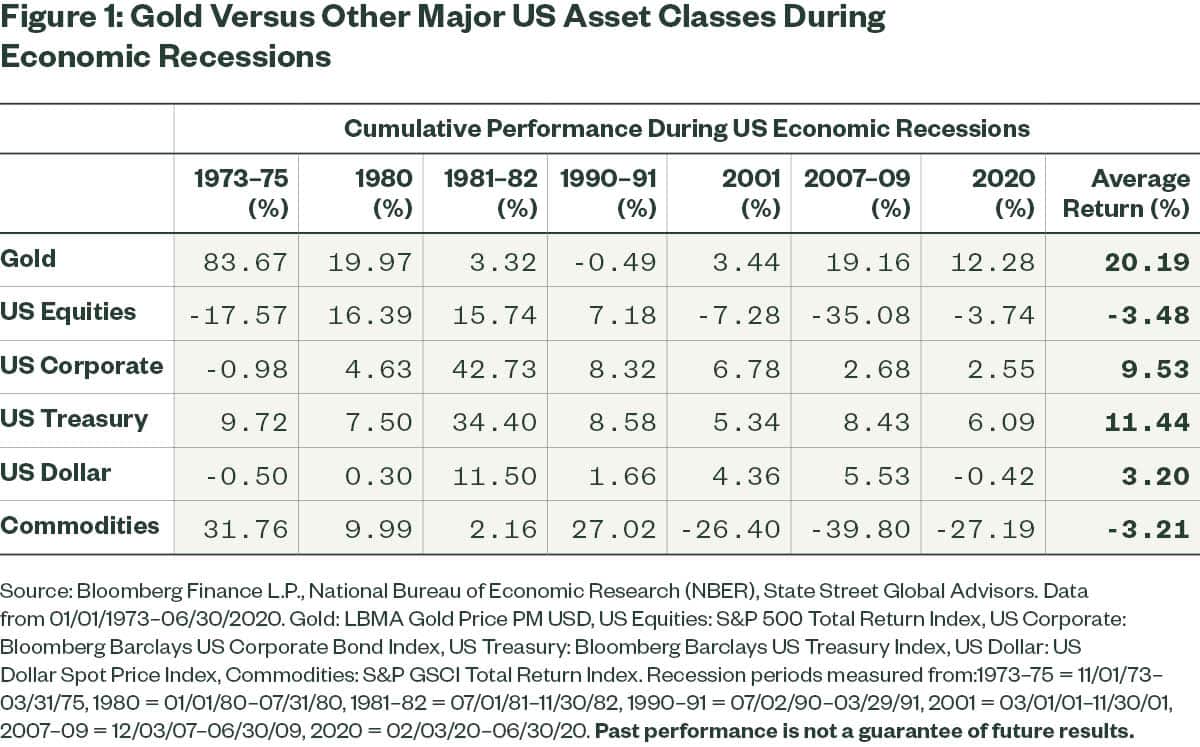 A Snapshot of Gold’s Historical Bouts with Recessions

A concern that’s been raised during this current US recession is gold’s rising correlation with US equities. However, this is not surprising – and it is actually in line with its historical performance. Since 1973, gold’s correlation with the S&P 500 Index has averaged -0.03. During recessions, this correlation has increased to 0.08, on average, with five out of the seven recessions being measured exhibiting clearly rising correlations (see Figure 2). This rise in correlation is likely driven by several coinciding factors that are affecting investor behaviors in a manner that is supportive of both gold and equities.

An economic recession is typically preceded by a market downturn, in which generally deep-value opportunities in stocks emerge. Simultaneously, investor behavior also tends to shift defensively, which has generally aided gold investment demand alongside bonds. Additionally, during recessions, central banks have tended to lower policy interest rates – which, coupled with a reduction in risk appetite, puts further pressure on bond yields. If history is any guide, this low-yield environment may present an accommodative backdrop for gold to perform well. 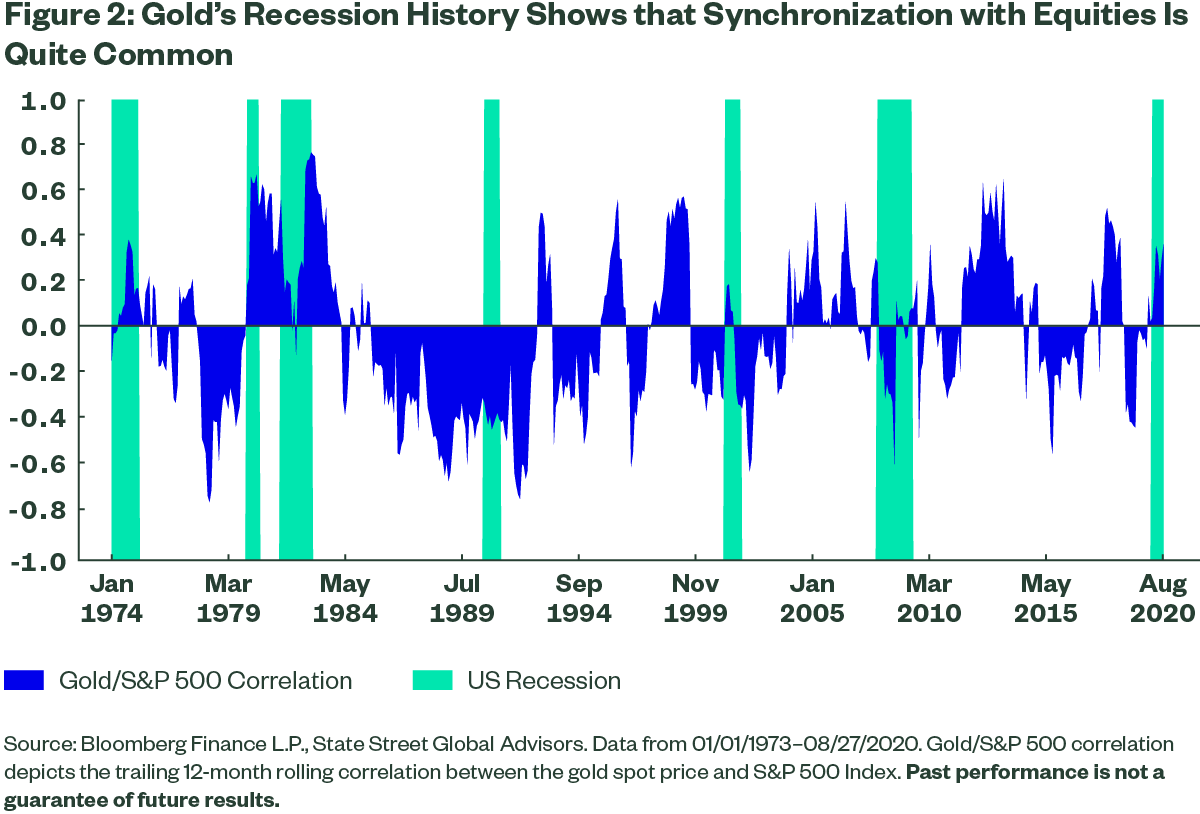 Gold’s behavior during recessions is fairly clear, and in favor of the yellow metal. Looking at gold’s performance during other cyclical phases shows that, on average, gold also fares well outside of recessions. Turning from lagging indicators — such as GDP — to leading economic indicators4 shows that gold’s average monthly return is positive during all four phases of a full cycle (see Figure 3). On an average monthly basis, gold has done its best during periods of recession and slowdown — outperforming equities, Treasury bonds, and the US dollar. During periods of US recovery and expansion, gold has shown positive returns, while keeping pace with other defensive portfolio assets, such as Treasury bonds and the US dollar. 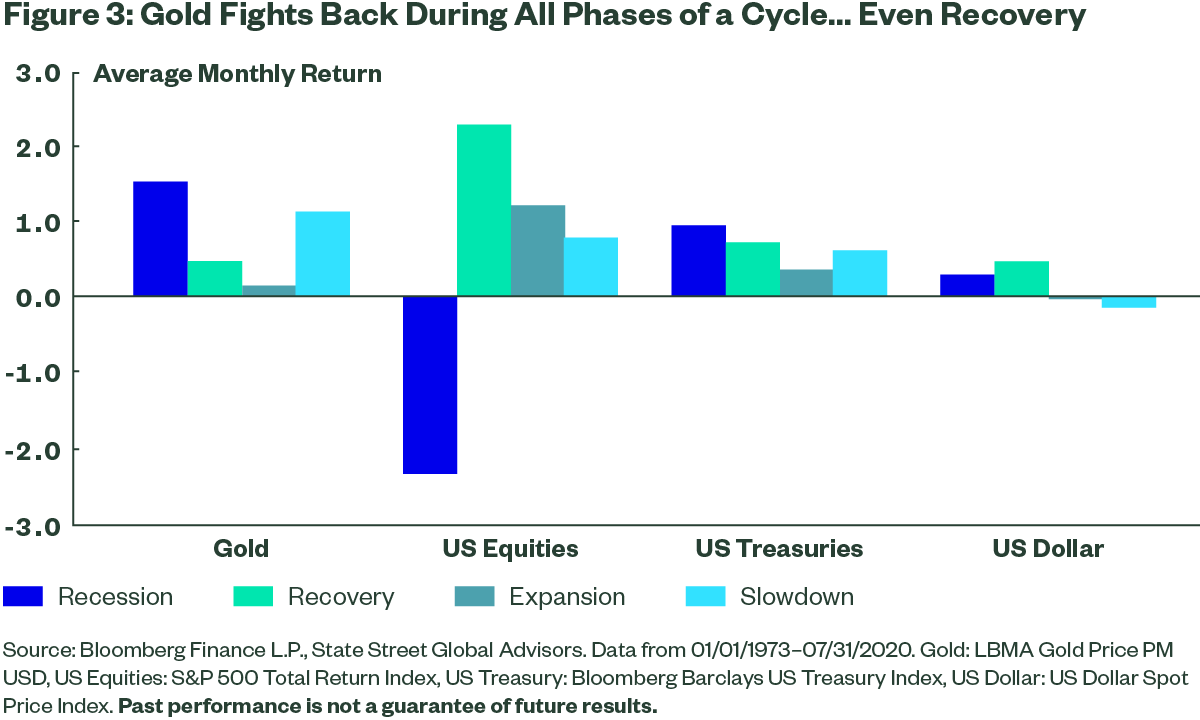 On the Road to Recovery

As the US economy continues on its path toward recovery, gold has the potential to remain strong and provide investors a vital tool for managing portfolios through ongoing uncertainty. The key catalysts that drove gold following the most recent recession in 2007–2009 are very similar to today’s backdrop: risk-off sentiment on the heels of economic slowdown, low real interest rates globally, and concerns about building inflationary pressures in response to fiscal and monetary stimulus. Continued tailwinds from a weaker US dollar outlook5 could also benefit gold, given the metal’s negative historical correlation to the greenback. These factors, along with fundamentals – as opposed to solely in which phase the economy resides – should be the focus for gold’s outlook.

Furthermore, gold may continue higher based on its performance starting at equity market bottoms during recessionary periods. Between the period of the S&P 500 bottoming after the 2007-2009 recession and gold reaching its prior all-time high in 2011 (3/9/09 – 9/6/11), the cumulative gold return was 106% over that two-and-a-half-year period. See Figure 4 below. Comparing this with gold’s performance to date — since the S&P 500 bottomed on March 23, 2020 in response to the current recession — paints a stark contrast, with the gold price rising only 24% since this market trough. See Figure 4. While this does not guarantee that gold will see the same level of performance as last time, it does, however, show that gold has the capacity to continue performing well over the medium to longer term – even as the US economy begins to recover and expand. 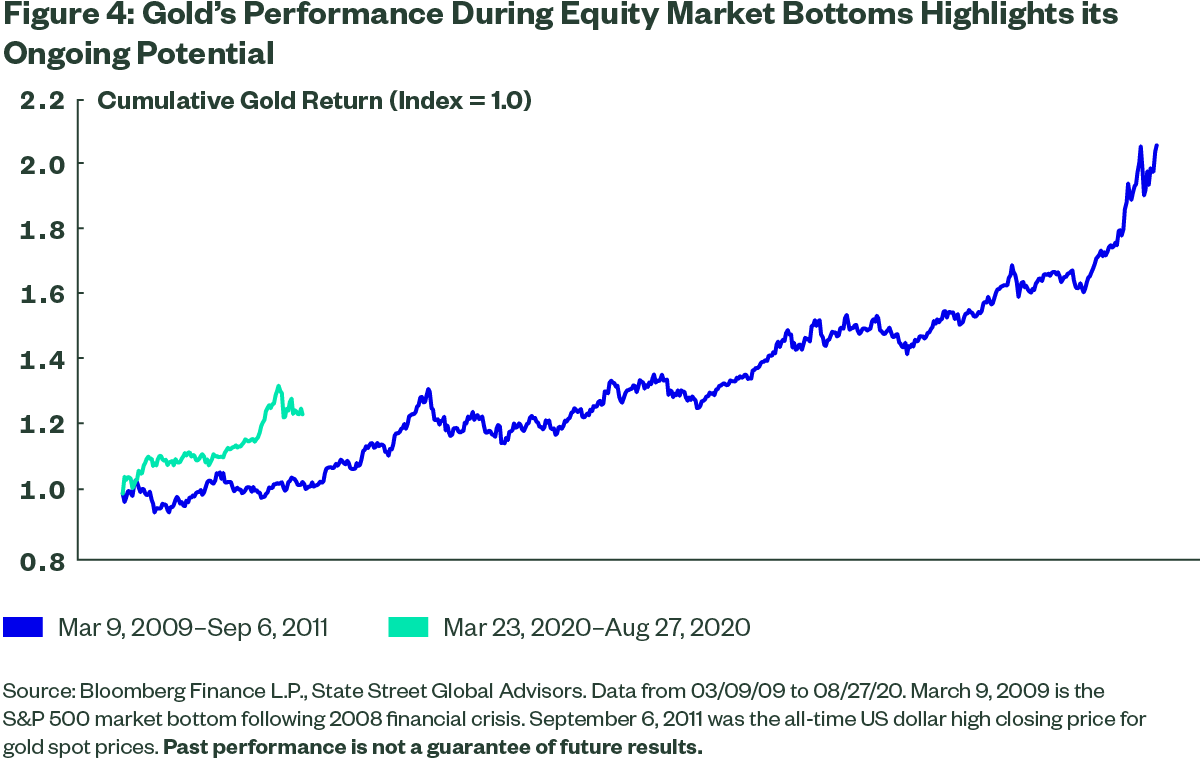 Furthermore, with the potential for volatility heading into year-end, coupled with rising geopolitical risks during a US election year, gold’s historical track record of hedging against significant equity drawdowns is a key example of its potential portfolio diversification benefits (see Figure 5). This may aid portfolios in an environment of continued uncertainty through the remainder of 2020 and into 2021. 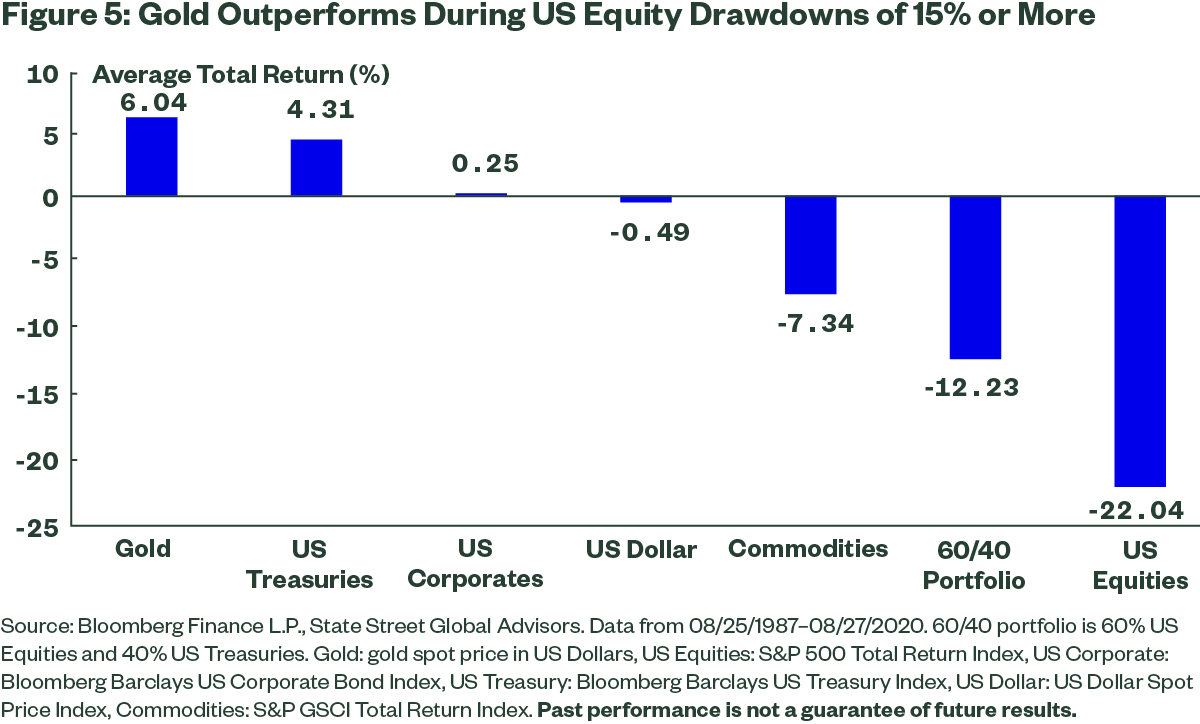