by David Smith, The Guardian

His returns examined at last, the president stands exposed as a tax avoider and serial debtor. It raises serious questions – but also, most likely, the passions of his fervent supporters

From the moment he rode down an escalator in the marble-clad, gold-trimmed Trump Tower to declare his candidacy for US president, Donald Trump was selling himself as a successful businessman who could run a successful economy. 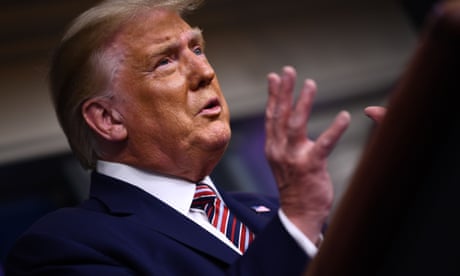 It was an image cultivated with voters for a decade on The Apprentice, the reality TV show in which Trump sat in judgment on aspiring entrepreneurs and told most: “You’re fired!”

On Sunday the mask was finally torn off. According to a blockbuster New York Times investigation into his taxes, the self-proclaimed billionaire, a personification of the hedonism and extravagance of the 1980s, has been losing more money than he makes.

These are the three key points of the Times report:

Will any of it have a major impact on his reelection chances? Up to a point.

Trump declared a staggering $1.4bn in losses from his core businesses for 2008 and 2009. He appears to have personally guaranteed loans totalling $421m, most now due within four years. The Times reported: “Should he win re-election, his lenders could be placed in the unprecedented position of weighing whether to foreclose on a sitting president.”

Joaquin Castro, a Democratic congressman from Texas, told MSNBC the Times report “reveals what many people have suspected, which is the larger point that Donald Trump is a fraud, that he’s not what he claims to be.

“He claims to be a successful, deal-making businessman who built himself up from the ground and his tax records reveal that he’s actually the opposite. He’s basically a deadbeat who doesn’t pay much in taxes.”

It pointed to a wider story about tax avoidance by the wealthy elite.

Elizabeth Warren, a Democratic senator, tweeted: “He knows better than anyone that there’s one set of rules for the wealthy and giant corporations and another for hardworking Americans – and instead of using his power to fix it, he’s taken advantage of it at every turn.”

It is tempting to see this as terminal for Trump in the November election against Joe Biden. But we have been here many times before. The same was said after the release of an Access Hollywood tape in October 2016, where Trump was heard bragging about sexual assault.

It is also worth remembering what happened in the first presidential debate against Hillary Clinton. The Democratic candidate suggested that perhaps Trump was not releasing his tax returns because he had paid nothing in federal taxes.

He interrupted and said: “That makes me smart.”

There were howls of outrage and prophecies that Trump must be doomed. Yet perhaps that remark resonated with some voters who reckoned that given the chance, they too would delight in getting around the rules in order to save a few bucks.

Some of the rampant enthusiasm at Trump’s rallies just possibly comes from people who see themselves in him.

When Trump grumbles bitterly about Barack Obama winning the Nobel peace prize while his own nomination received scant coverage, it seems to strike a chord with anyone in the crowd who feels forgotten, neglected or passed over.

When Trump presents the story of a self-perceived “outsider” who does not talk like the educated elite yet still made it rich and married a model, these supporters seem to embrace the idea of the blue-collar billionaire as one version of the American dream.

There are also large chunks of Trump’s cult who pay little attention to the New York Times or Twitter as it is.

Trump’s tax affairs have been reported before – regarding the family business, for one Pulitzer prize-winning example from the Times, from October 2018. But the new Times investigation raises further, even more damaging questions.

The president has been notoriously outspoken in his praise for the leaders of the Philippines, India and Turkey.

Does Trump’s substantial income from abroad conflict with his responsibilities as president? Did he put his personal interest ahead of the American people? Did he break the law?

The Times has promised more stories to come. They won’t shake the Trump faithful, but they might chip away at enough voters to make an important difference.