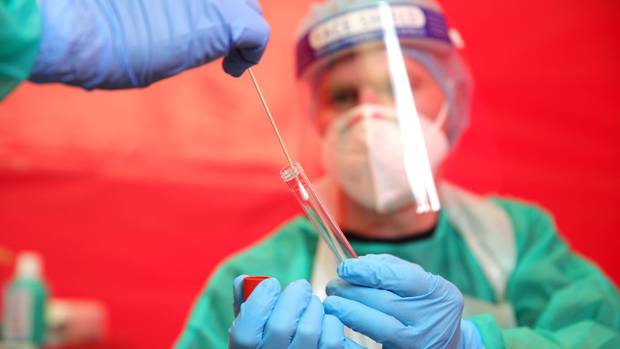 Coronavirus infections are soaring across Europe and the US – and WHO has a warning. Photo / Getty Images

The number of coronavirus cases in Europe is soaring and the World Health Organisation warns worldwide deaths could more than double.

The UK and France both reported their highest rise in daily coronavirus numbers today as Europe is gripped by a second wave.

Global deaths have reached 985,302, according to a Johns Hopkins University tally.

The World Health Organisation warned that coronavirus deaths could double to two million if infection-fighting measures are not kept up.

It comes as restrictions are tightened in Europe and the US crosses another bleak milestone.

The hard-hit US crossed seven million cases — more than a fifth of the global total. This is despite the US only accounting for 4 per cent of the world’s population.

It took the US just 25 days to record another one million cases after it marked six million infections on August 31.

Now the world is being forced to confront the chilling possibility of two million global deaths from the pandemic.

“One million is a terrible number and we need to reflect on that before we start considering a second million,” the WHO’s emergencies director Michael Ryan told reporters when asked how much higher deaths could mount.

But he added: “Are we prepared collectively to do what it takes to avoid that number?

“If we don’t take those actions … yes, we will be looking at that number and sadly much higher.”

The WHO warning came as Spanish officials expanded a lockdown in and around Madrid on Friday to cover one million people.

Madrid’s health authority said new rules largely banning tens of thousands from leaving their districts — in addition to the 850,000 already living under similar restrictions — would be enforced from Monday.

Across Europe, new spikes were springing up, with Poland and France the latest to register record figures.

France’s daily cases soared past 16,000 for the first time in a stark indicator of the virus’s resurgence, and the French government faced protests from the hospitality industry as it prepares tough new restrictions.

Across the Channel, British authorities announced restrictions now extending to one-quarter of the country’s population, while two supermarket chains said they were rationing purchases of certain goods to clamp down on panic buying.