by Patrick Wintour and Julian Borger, The Guardian

Donald Trump and Xi Jinping offered starkly contrasting responses to the coronavirus pandemic on Tuesday, with the US president blaming Beijing for unleashing a “plague” on the world – and his Chinese counterpart casting the fight against the virus as an opportunity for international cooperation. 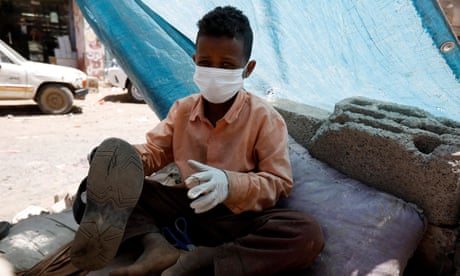 In his recorded video address to the annual UN general assembly, Trump unleashed a rhetorical assault on Chinawhich seemed pitched at a domestic audience.

Speaking as the US death toll from Covid-19 passed 200,000, Trump promised a “bright future” but said the world “must hold accountable the nation which unleashed this plague on to the world: China.”

Trump also took the opportunity to attack the World Health Organization – falsely describing it as “virtually controlled by China” – and again incorrectly claiming that the international body had said there was no evidence of human-to-human transmission.

The UN general assembly has itself been remade by the pandemic, reduced to a virtual event for the first time in its 75-year history, but sharp differences over the international response to coronavirus – and the contrasting world orders being offered by China and the US – were on clear display.

Trump promised to distribute a vaccine and said, “We will defeat the virus, and we will end the pandemic” and enter a new era of prosperity, cooperation and peace.

The US president also reprised his criticism of the UN, arguing that it should focus on what he described as “the real problems of the world” such as “terrorism, the oppression of women, forced labor, drug trafficking, human and sex trafficking, religious persecution, and the ethnic cleansing of religious minorities”.

China’s UN ambassador Zhang Jun immediately hit back, saying: “The world is at a crossroads. At this moment, the world needs more solidarity and cooperation, but not confrontation.”

That message of co-operation was repeated throughout tXi’s speech, in which the Chinese leader posed as the UN’s friend and offered extra cash to find a Covid vaccine, vowing Beijing has “no intention to fight either a cold war or a hot one with any country”.

Xi said: “We will continue to narrow differences and resolve disputes with others through dialogue and negotiation. We will not seek to develop only ourselves or engage in zero sum game. Unilateralism is dead.”

Echoing the sentiments of the UN secretary general António Guterres, Xi called for a global response to the epidemic, co-ordinated by the WHO – from which Trump has withdrawn and his presidential rival Joe Biden has promised to rejoin.

In another implicit rebuke to the US, Xi sought to portray China as the country embracing modernity.

He said: “Burying one’s head in the sand like an ostrich in the face of economic globalization, or trying to fight it with Don Quixote’s lance, goes against the trend of history. Let this be clear: the world will never return to isolation.”

Trump tried to broaden his attack on China’s handling beyond Covid by condemning China’s carbon emissions record as well as its dumping of plastic.

He said: “Those who attack America’s exceptional environmental record while ignoring China’s rampant pollution are not interested in the environment. They only want to punish America. And I will not stand for it.” He made no mention of China’s human rights record.

But Xi seemed prepared for Trump’s unlikely line of attack, saying China was on course to reach zero carbon emissions by 2060. He added China would achieve a peak in carbon dioxide emissions before 2030.

The Chinese leader also signalled his intention to boost China’s commitments under the Paris climate agreement – from which Trump has withdrawn.

When his turn came, Emmanuel Macron berated both superpowers for the paralysis of the UN security council in the face of the pandemic and the climate emergency.

In a 48-minute speech – more than three times his allotted time – the French president said the council’s members “haven’t been able to come together as we would have wished because two of them have preferred a display of their rivalry to collective efficiency”.

Macron also rejected the US claim to have revived UN sanctions on Iran, saying the Trump administration’s policy of “maximum pressure” had failed.

In his own speech, the Iranian president, Hassan Rouhani, relished the fact that the US won the support of only the Dominican Republic on the 15-member security council for its effort to “snap back” UN sanctions.

“This is a victory not just for Iran but for the global community,” Rouhani said. “The United States can impose neither negotiations nor war on us.”

In his opening address, Guterres tried to galvanise the 193-member assembly to acknowledge the world was at a 1945 moment, requiring unprecedented co-operation to prevent the world splitting into two competing empires.

Warning that “we are moving in a very dangerous direction,” Guterres said: “Our world cannot afford a future where the two largest economies split the globe in a great fracture. A technological and economic divide risks inevitably turning into a geo-strategic and military divide. We must avoid this at all costs.”

But he also nailed his political colours to the mast, saying the populists and nationalists had failed to tackle Coronavirus, and again urged world leaders to follow the science, and to recognise that the coronavirus was only a dress rehearsal for the challenges ahead.

Guterres won support from the Russian president Vladimir Putin, who proposed a high-level conference to spread research on a coronavirus vaccine and called for the WHO to be given greater powers.

The first leader to speak was Jair Bolsonaro, who used the occasion to deny that he had mishandled his country’s coronavirus crisis, and to claim that Brazil had been wrongly portrayed as an environmental villain.

Even as fires continue to rage in the Pantanal, the world’s largest tropical wetlands, Bolsonaro claimed Brazil had been the victim of a “misinformation campaign”.

Brazil has seen more than 137,200 coronavirus deaths – second only to the US – and Bolsonaro has faced accusations of catastrophically mismanaging the crisis by dismissing its severity and undermining containment measures.

In a speech which also seemed directed more to a domestic audience, Bolsonaro once more questioned the need for lockdown measures, and blamed the press for “politicizing” the disease, which has infected 4.6 million Brazilians.