Donald Trump Should Withdraw All U.S. Troops from Afghanistan Now

by Bonnie Kristian, The National Interest

Home/Opinion/Donald Trump Should Withdraw All U.S. Troops from Afghanistan Now
Previous Next

Donald Trump Should Withdraw All U.S. Troops from Afghanistan Now 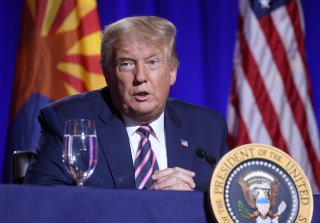 Even with the Taliban and Afghan officials meeting in Doha for direct dialogue, violence steadily continues. One term of the U.S.-Taliban deal was a limited ceasefire: The Taliban would not attack U.S. and NATO coalition forces, and U.S. forces would only strike the Taliban in defense of Kabul’s troops. Though this arrangement has mostly held, breakaway factions within the Taliban network don’t always abide by its leadership’s commitments, and the Taliban continues to regularly attack the Afghan military. Taliban territorial control is on a years-long growth trend, and it remains unclear when intra-Afghan talks may begin—let alone conclude—or whether the U.S. drawdown timeline will be preserved. All American forces are supposed to leave Afghanistan by the summer of 2021, but at least one recently disbanded U.S. base has been re-established on a smaller scale, while another due to be closed is instead becoming a “strategic hub.”

In short, it remains an open question whether the “peace deal” deserves that name. And given that the answer to that question depends significantly on the Taliban (hardly trustworthy) and Kabul (long plagued by severe corruption), it’s not cynical to imagine that this time next year we’ll be preparing for the 20th anniversary of the 2001 invasion with no U.S. exit in sight. Instead of chancing that too plausible scenario, Washington should withdraw all U.S. troops from Afghanistan now—a decision that might even help intra-Afghan diplomacy succeed. If, as anticipated, President Trump announces a troop drawdown soon, he should announce a complete and final departure before year-end.

The wisdom of opening talks with the Taliban was its recognition of reality: There is no military victory to be had in Afghanistan. After nearly two decades of U.S. military intervention, it is inescapably clear that Washington cannot bomb Afghanistan into Western democracy or drone away all extremism. We have tried stealth and surge, over 100,000 boots on the ground and fewer than 10,000. None of it has “fixed” Afghanistan, nor will it. Afghanistan’s conflict is ultimately a political (and religious and more broadly cultural) problem in need of a local, political solution developed by the people who must live with its results.

Unfortunately, that is a solution in which the Taliban will have to be involved, because the Taliban is not going away for the foreseeable future. It exercises varying degrees of authority over large portions of Afghan territory, and Afghan public opinion of the Taliban is far from uniformly negative. In Wardak province, The Washington Post reported in early August, rising conflict between Taliban and Afghan government forces has led some locals to abandon support for government officials. “The people blame the government for the delay in peace talks,” a regional politician,  Esmatullah Azim, told the Post. “They are hungry for peace and want it any way and anyhow.” The Taliban are expected to be violent, but the government is supposed to keep the public safe—so even though the Taliban kills more civilians than government forces do, it’s the government’s reputation and authority that takes the bigger hit when violence breaks out.

There are at least two ways, then, in which immediate U.S. withdrawal could progress Taliban-Kabul diplomacy and move Afghanistan toward that longed-for peace (or at least something more stable and tolerable than what amounts to decades of civil war with foreign intervention that is often worse than useless). One is that the Taliban will lose much of its core aim and appeal. The group’s “purpose remains what it was when Afghan mujahideen resisted Soviet occupation in the 1980s,” military historian Andrew Bacevich wrote at the Los Angeles Times: “They are determined to oust foreign occupying forces.” If U.S. forces leave, the Taliban can claim victory, but it can no longer freely rationalize violence as a defense against occupation by the global superpower. A Taliban without a visible foreign enemy to oppose may behave more like the legitimate political party some have suggested it could become.

Complete American drawdown could also incentivize quicker and more pragmatic negotiations. While generally abiding by the ceasefire with the United States, the Taliban has shifted its attention to attacking Afghan targets in an attempt to gain leverage against Kabul. A fast resolution would work to Kabul’s advantage here, but instead the Afghan government is operating on a long timeline tied to slow U.S. withdrawal. Some Trump administration officials have argued a slow exit will “give the Taliban an incentive to reduce attacks,” but so far it seems the opposite is true: The longer this diplomatic process is stretched, the more the Taliban attempts to strengthen its position with violence. It is difficult to imagine Kabul would take this same counterproductively slow approach if the U.S. intervention were ended.

Of course, immediate withdrawal makes sense for the United States, too. Remaining in Afghanistan is a needless drain on U.S. defense resources, constantly risks escalation, and serves no vital national interests. Occupying Afghanistan is not making us safer, though it is certainly making Afghanistan less safe, both by distorting internal diplomacy and directly causing record civilian casualties. For our sake and Afghanistan’s, it is time to stop prolonging our role in this war in the name of peace.

Bonnie Kristian is a fellow at Defense Priorities, contributing editor at The Week, and columnist at Christianity Today. Her writing has also appeared at CNN, NBC, USA Today, the Los Angeles Times, and Defense One, among other outlets.