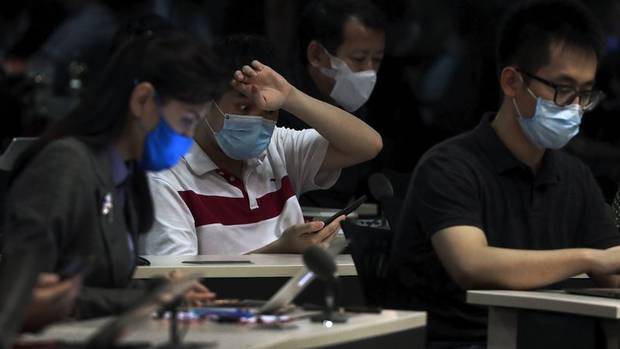 A Chinese journalist wipes his forehead while looking at his smartphone during a daily briefing by Chinese Foreign Ministry spokeswoman Hua Chunying. Photo / AP

A senior Australian government minister on Sunday warned foreign journalists working in the country they might come under the scrutiny of federal agencies if they provide a “slanted view” of Australian affairs.

Home Affairs Minister Peter Dutton made the comments during a television interview with the Australian Broadcasting Corp, referring to journalists reporting to “a particular community”.

While he didn’t mention China, Dutton’s comments come after the evacuation from China last week of Australian journalists Bill Birtles and Mike Smith, who sheltered in Australian diplomatic compounds after being questioned by police. Australian Cheng Lei, who works as a business anchor for CGTN, China’s English-language state broadcaster, earlier was taken into custody.

“If people are here as journalists and they’re reporting fairly on the news, then that’s fine,” Dutton told ABC TV’s Insiders program. He said reporters shouldn’t provide “a slanted view to a particular community”.

“Where ASIO has sufficient grounds for the execution of a search warrant or for activities otherwise, then they’ll undertake that activity,” he said.

“If people are masquerading as journalists or business leaders or whoever they might be and there’s evidence that they are acting in a contrary nature to Australian law, then ASIO and the Australian Federal Police and other agencies will act.”

He said there is no evidence that action by Australian agencies had put Australian journalists in China at risk. Asked about Cheng Lei, he said “we want to work very closely with the Chinese in relation to that matter and we’ll continue to do that”.

Beijing accused Australia of an interference in China’s internal affairs and judicial sovereignty for providing diplomatic protection to Birtles, who reports for the ABC, and Smith, who works for the Australian Financial Review.

“Australia’s actions in organising the two journos to hide in the embassy completely exceeds the scope of consular protection and in fact is interference in a Chinese legal case,” Chinese Foreign Ministry spokesman Zhao Lijian said.