by Justin McCurry and Eleanor Ainge Roy, The Guardian

Rescuers search for more than 40 crew from ship carrying 6,000 cattle that went down en route from New Zealand to China

A second survivor from a cargo ship carrying 6,000 cattle that capsized off southwest Japan has died after being pulled from the water unconscious on Friday.

The Japanese coast guard said the man had been unresponsive when he was found about 120 km (75 miles) north-northwest of Amami Oshima island and transferred to a hospital.

The dead crew member, who has not been named, was found drifting face down in the water at 6:30am Japan time on Friday and rescued at 7:16am, 120km from Amani Island, the coastguard said.

A life jacket and cattle carcass were also collected from the same area, the coast guard said, adding that the search was continuing for 41 other crew members.

The search for survivors is expected to be hampered by the arrival of a powerful typhoon over the weekend. The meteorological agency said Typhoon Haishen could pose a serious, unprecedented and imminent danger to human life if it is as intense as experts were predicting.

The typhoon is likely to hit a large area spanning from Amami-Oshima island to the main island of Kyushu in western Japan from Sunday through Monday, the agency said.

A Filipino crew member from the Gulf Livestock 1, which went missing on Wednesday on its way to China from New Zealand, was rescued on Wednesday night. Three vessels, four planes and two divers were taking part in the search, the coastguard said on Friday.

UAE-based Gulf Navigation issued a statement saying the Panamanian-flagged vessel was theirs. 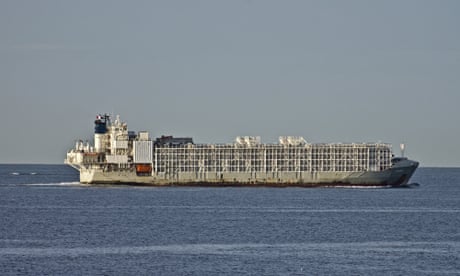 “Our hearts go out to those onboard and their families at this time,” a Gulf Navigation spokesman said. “We also express deep regret for the sad loss of the livestock on board. We are monitoring the situation closely and working closely with those involved in rescue efforts. We pray that there are other survivors.”

The ship, with a cargo of nearly 6,000 cattle, sent a distress call from the west of Amami Oshima island on Wednesday as Typhoon Maysak lashed the area with strong winds and heavy seas.

Dramatic photos and video released by the coast guard showed Sareno floating in the darkness and being pulled onto a boat with a rope as rescuers battled violent, rolling waves. He was quickly brought to a large vessel, where coast guard personnel with surgical masks and gloves wrapped him with blankets.

“Water,” said the man, who identified himself as a Filipino in the video. “Thank you, thank you very much.”

The crew of 43 was made up of 39 people from the Philippines, two from New Zealand, and two from Australia, the coastguard said.

The Philippine department of foreign affairs said its consulate in Osaka was “monitoring the situation and co-ordinating” with authorities.

Liezel Pitogo, the wife of one of the Filipino crew members, last spoke to her husband Lindon, a seafarer on the ship, on Tuesday evening, according to the BBC.

He said they were travelling to China but were a bit worried about the weather, she said.

“His phone was unreachable on Wednesday. I thought it’s just a problem with the erratic signal when they are on the sea but I saw a Facebook post from a seaman’s wife about a cargo ship that went missing.”

One of the missing Australians is Lukas Orda, 25, of Queensland, who was working on the live export ship as a veterinarian, a job he had only begun in June after leaving a horse veterinary practice on the Gold Coast.

Michael Lowcock, a Catholic priest from the town of Mount Isa in Queensland, said Orda’s family were “very devastated” by news the ship had sunk. He said Orda, with his wife Emma, had recently had their first child – a son named Theo. Orda’s parents are both well known doctors in their community.

The coastguard quoted Sareno as saying the ship lost an engine before it was hit by a wave and capsized.

On Thursday New Zealand suspended live cattle exports in the wake of the tragedy. Reports in New Zealand media said dozens of dead cows had been found off the East China Coast.

A spokesperson for Maritime New Zealand said standard pre-departure safety surveys were undertaken on the Gulf Livestock 1, both on arrival and departure from Napier port, including inspections of livestock carriers and pens.

“No irregularities or issues were noted,” the spokesperson said.

Wayne Langford, the animal welfare spokesperson for New Zealand’s federated farmers, said the nearly 6,000 cattle on board had been drawn from dairy farms around New Zealand, and dairy farmers were feeling “devastated by the tragic incident”.

Live cattle export is a small market in New Zealand, with fewer than 10 ships leaving with cargo each year, carrying around 1-2% of the country’s dairy herd, Langford said.

All animals on board would have been aged two or less.

“It’s tragic, it such a significant loss of much-loved animals – it’s a disaster all around,” Langford said.

“China has got a growing dairy sector and New Zealand has been helping fill that for a few years now. These animals go over as young animals and spend their lives as dairy cows in farms in China.”