Why Has China Detained a CGTN Journalist?

Home/Analysis/Why Has China Detained a CGTN Journalist?
Previous Next

Why Has China Detained a CGTN Journalist?

The arrest of Chinese-Australian broadcaster Cheng Lei has prompted fears of hostage diplomacy. 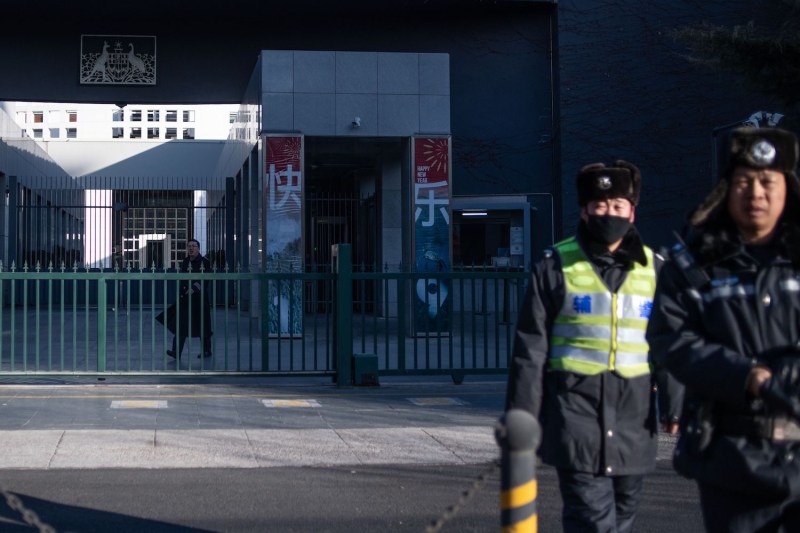 Chinese police patrol outside the Australian embassy in Beijing on January 25, 2019. FRED DUFOUR/AFP VIA GETTY IMAGES

Welcome to Foreign Policy’s China Brief. The highlights this week: A Chinese-Australian journalist has been detained in Beijing, ethnic Mongolians hold rare protests over language instruction in Inner Mongolia, and China blocks the sale of TikTok to Microsoft.

China’s foreign ministry has confirmed that the Chinese-Australian journalist Cheng Lei has been detained in Beijing on unspecified charges. Cheng is a prominent face on China’s English-language TV channel CGTN, where she hosted a daily business show. She disappeared on Aug.14, prompting fear among friends and colleagues. CGTN has deleted any reference to her existence in its materials.

Cheng, who was born in mainland China, became a naturalized Australian citizen after emigrating at the age of 10. That is a dangerous position, especially since China has claimed in the past that dual citizens have renounced their foreign citizenship in detention. China is already holding another Chinese-born Australian, Yang Hengjun, on espionage charges. China allows detainees to be held without charge for up to six months.

It’s unclear what prompted Cheng’s detention. It’s unlikely to be her journalism: Although she worked for CNBC before taking the job at CGTN in 2012, Cheng’s CGTN work has stayed within the limits of state media. But Australian-Chinese relations are at a nadir, following Australian investigations into Chinese influence, a stream of insulting rhetoric and threats from Chinese media, and China’s worsening human rights.

That has prompted fears that Cheng might have been taken as a hostage, as with Canadian citizens Michael Kovrig and Michael Spavor in December 2018. Cheng played an active role in the Australian expatriate society in China, and her former partner was the head of the Australian Chamber of Commerce.

CGTN anchors have previously been caught up in political intrigue, though never foreign citizens. The most prominent case is that of Rui Chenggang, once a rising star, who disappeared in 2014 and is said to be in prison. There are rumors about two other CCTV presenters detained as part of the investigation into the fallen public security minister, Sun Lijun.

But as a foreigner, Cheng is unlikely to have been given the kind of access to the powerful that creates those dangers. She may instead simply be the victim of a state that increasingly sees foreigners as inherently suspicious.

Mongolian protests. Inner Mongolia, which was absorbed into the Chinese state after 1949, has seen vigorous protests by ethnic Mongolians after attempts to change elementary and high school classes from Mongolian into Mandarin. China has gradually eradicated or reduced minority language education as part of its shift away from the multicultural ideals the state once imperfectly espoused. The targeting of Chinese languages such as Cantonese has also been a point of contention, especially in Hong Kong.

The protests may be a critical test for minority policy in the Xi era. Over the last four decades, Inner Mongolia has been more peaceful than Tibet or Xinjiang. That is in part because Mongolians have a state of their own next door, along with a relatively porous border. Under past leaders, protests on this scale would have likely produced a policy retraction or revision. If the government instead cracks down, it will create yet another long-term problem in its borderlands.

But as Lucas Tcheyan and Sam Bresnick recently arguedin Foreign Policy, reciprocity isn’t much of a policy by itself—especially, in this case, since the network of influence China maintains on U.S. campuses rarely operates through direct visits by embassy staff.

Taiwan switches passports. Taiwan has announced its new passport designs, keeping the name Republic of China in Chinese but referring only to Taiwan in English. The move follows other shifts away from using the term China, such as the renaming of China Airlines—Taiwan’s flagship carrier. Sadly, proposals to use distinctly Taiwanese images such as bubble tea were rejected.

The symbolic moves could prompt anger among Chinese who feel entitled to ownership of Taiwan, which remains one of the most hot-button topics in censorship. Nationalistic Chinese websites have blurred images of the new passports in their stories.

TikTok sale likely blocked. China signaled over the weekend that the sale of the social media app TikTok to Microsoft by parent company Bytedance would likely be blocked under hastily rewritten export rules. Bytedance, like all other Chinese firms, depends on state sufferance, but the announcement is a harsh blow to the firm, which may now have to eat bans on TikTok in India and the United States—two of its biggest markets—without any chance of recouping losses through a sale.

The move also reinforces perceptions that TikTok serves Chinese state purposes and raises questions about the security of its underlying code and the nature of TikTok’s algorithms, which the firm denies favor pro-China viewpoints.

India puts 118 more apps on the blacklist. Amid renewed tensions over the disputed China-India border, the Indian government blocked another swath of Chinese apps, mostly targeting games. Although the government says the move is for security purposes, that seems doubtful: Many of the games, such as the popular PUBG, weren’t even developed in China but happen to be owned by the gaming giant Tencent.

Such bans have become the go-to way for the Indian government to play to nationalistic sentiments and inflict economic damage on China, but it costs India’s own tech sector investment from China. Chinese firms may be increasingly unhappy about having to bear the economic burden of Beijing’s jingoism, but there is little they can do about it.

Global internet cables threatened. Global internet traffic largely depends upon high-speed undersea cables, especially between continents. The U.S. Clean Network Initiative, launched by Pompeo, includes a Clean Cables section, amid fears that Chinese ownership or investment in those cables could be used for sabotage or espionage. The move has caused Google and Facebook to abandon major Asia-North America cable projects due to the involvement of Chinese investors.

“The Good Caucasian of Sichuan”

In keeping with this edition’s focus on petty squabbles: Geremie Barmé, a doyen of China studies, has launched a dramatic broadside against the New Yorker’s Peter Hessler, who recently returned to China. Hessler’s articles are very popular inside China, not least because he tends to avoid political commentary in favor of localized stories. Barmé accuses him of practicing self-censorship in order to avoid tackling human rights issues, thus effectively acting as a Chinese propagandist.

The criticisms aren’t particularly fair, but they speak to the real problems of trying to give a humane account of a country with an inhumane government. The approach that worked for Hessler in the China of the 2000s may not work in the China of 2020.