A Cold War with China?

by Zack Brown, The National Interest

A Cold War with China? 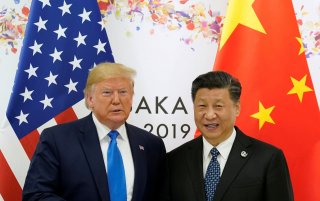 Lora Lumpe, the CEO of the Quincy Institute for Responsible Statecraft, believes the United States is “sliding seamlessly into the next decades-long era of superpower competition”—this time with China.

For Washington to fall into another globe-spanning military confrontation would be a strategic blunder of our own making, warned Lumpe in an interview on the national security podcast, Press The Button.

“There’s no doubt that we’re in a competitive relationship, but it’s a technological competition,” she said. “It’s not an effort by the Chinese military to exert dominance around the rest of the world.” What’s more, a wide-ranging contest with China “will drain resources away from the real threat, which, as most people acknowledge, is climate chaos.” Instead of leaning into a new Cold War, “what we really need to do is take down the military-industrial complex and clear the way for the green-industrial complex,” urged Lumpe.

This won’t be easy, she readily admitted. Tension with China, after all, provides a useful raison d’être for the defense sector at a time when the War on Terror is winding down and the Pentagon budget faces increasing scrutiny.

Even more concerning, the American national security apparatus itself—constructed in the early days of the Cold War and retaining its basic form ever since—is expressly designed for such an armed standoff with Beijing. Indeed, it’s hard to imagine that the United States, with its vast set of alliances and global network of military infrastructure, could react in any more of a natural way to the challenges posed by China’s growing power.

It is exactly this mentality that Lumpe aims to deconstruct, even as she likened it to challenging “the air that we breathe in.” So pervasive is the acceptance of Washington’s “abnormal level of militarization,” she said, that most Americans don’t question it. Just look at the eight hundred bases in over seventy countries to which the Pentagon has access. “If any other country had that type of military domination, she argued, “we would rightly call that out as excessive.”

That Americans typically don’t could be explained by a “cultural fixation” with all things military, one Lumpe suggested is supported by parts of the media and entertainment industry. But it may also do with a lack of awareness of just how much everything costs.

Though a baseline Pentagon budget might be measured in the hundreds of billions of dollars, this does not include funding for Veterans Affairs, Homeland Security, nuclear weapons, active military theaters, and various intelligence agencies. When these other aspects are tacked on, the annual cost of the national security apparatus balloons to well above one trillion dollars—or more than half of all federal discretionary spending.

“We need to help the American public see how much of the burden of this massive military expenditure is coming out of their pockets,” explained Lumpe, “This is not an acceptable status quo.”

Her solution: “right-size” the US defense budget and its military presence around the world, in large part through a frank reappraisal of what international role America should play in the twenty-first century—and how it should differ from the past.

Simply doing less may be a good start. “We need to step back and let our partners in various regions take the lead in their own diplomacy,” she said, “and not be dictating it by being so militarily dominant that we distort the regional balance.”

In the Middle East, for example, this may involve drawing down the American military involvement in Syria, Iraq, and Afghanistan while fostering an environment where local actors “learn that they have to deal with each other, that they can’t work through the United States and have us do their bidding for them,” explained Lumpe. The overall shift would be one of “pursuing a foreign policy framework of military restraint.”

This effort will not get anywhere if Washington and Beijing continue their drift towards hostility, she warned. Luckily, there are constituencies who may find themselves allies in this fight. “Business interests, universities who count on Chinese students, and environmental groups for whom cooperation with China in combating climate change is vital” all have a clear interest in keeping the peace, said Lumpe. “Not to mention the Chinese diaspora for whom a new McCarthyist period aimed at China would be personally devastating.”

“If we bring together those forces,” she argued, “we can head off this slide into a new Cold War.”

The entire interview with Quincy Institute for Responsible Statecraft CEO Lora Lumpe is available here on Press The Button.

Zack Brown is a policy associate at Ploughshares Fund, a global security foundation.