by Luke Harding, The Guardian

Raised levels of cholinesterase are important piece in the puzzle of Kremlin critic’s sudden illness.

Alexei Navalny was on a trip to Siberia when he was apparently poisoned last week. Photograph: Pavel Golovkin/AP

High levels of the chemical cholinesterase in tests on Alexey Navalny are a compelling clue that he was poisoned with a nerve agent, experts have said.

Hamish de Bretton-Gordon, a chemical and biological counter-terrorism expert, said the presence of cholinesterase inhibitors suggested Navaly was suffering from nerve agent poisoning. Raised levels of cholinesterase were an important “jigsaw piece in the puzzle”, he said.

Navalny was admitted to the Charité hospital in Berlin on Saturday, two days after he was apparently poisoned with a cup of tea while on a trip to Siberia. He is being treated in intensive care and remains in a medically induced coma.

The hospital said a team of physicians had carried out an extensive examination, and their clinical findings indicated Navalny was poisoned with a substance from a group of cholinesterase inhibitors. The specific substance involved remained unknown, the hospital said, adding that further comprehensive tests had been initiated.

Cholinesterase is a chemical that prevents the breakdown of other chemicals that allow the nerves to function. If these are affected, there is a chain reaction that destroys the nerves and affects the body’s main organs, especially the heart and lungs.

De Bretton-Gordon said it was unclear how the poison may have been delivered, but he said nerve agents could be put in liquid such as tea or absorbed via the skin.

The latter is what happened in the case of Sergei and Yulia Skripal, who fell ill after touching a doorhandle at their home in Salisbury. According to the government, two assassins working for Russia’s GRU military intelligence smeared the handle with novichok, a deadly Soviet-era nerve agent.

De Bretton-Gordon said it was also possible that Navalny had been poisoned with an organophosphate or pesticide. This would have a similar effect, he said. Navalny’s chances of survival depended on how much poison he consumed and whether the Russian doctors in Omsk who initially treated him used the drug atropine.

The Russian hospital said it found no sign of poisoning and claimed Navlny had suffered a “metabolic collapse”. German doctors have come to a different conclusion. As a result of their diagnosis, Navalny is being treated with atropine, which the Berlin hospital described as an antidote.

The Charité said the long-term prognosis for Navalny was unclear and that the possibility of lingering effects, particularly to the nervous system, could not be excluded.

De Bretton-Gordon said a nerve agent might normally be expected to kill a person, noting that Skripal only survived because he was swiftly given an antidote.

“It’s just a touch suspicious that someone vehemently against the Russian state should fall ill like this,” he added. “Navalny was attacked with some sort of chemical, in the same way as Alexander Litvinenko [poisoned in 2006 with a radioactive cup of tea], Sergei Skripal and a host of others.”

He said measuring levels of cholinesterase was done routinely at the UK government’s Porton Down facility, which identified the novichok used against Skripal. It was analogous to checking radiation levels for workers in the nuclear industry, he said. 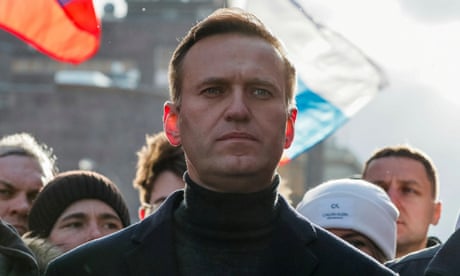 Norman Dombey, an emeritus professor of physics who gave evidence in 2015 to the public inquiry into Litvinenko’s murder, said treatment for nerve agent would typically involve a mixture of atropine and an oxime.

He explained: “Atropine is an anti-convulsant, which stabilises the effect of the nerve agent on the muscles. The oxime is an antidote to the nerve agent: it breaks down the neurotransmitter acetylcholine, which nerve agents cause to build up to lethal levels.”

The treatment in the case of the Skripals also included putting both patients into induced comas in order to lower their body temperatures. Yulia Skripal was discharged after a month in Salisbury district hospital, and Sergei after two.