This is the second in a series examining the growing tensions between China and the United States and how the situation could escalate into a full-blown military conflict.
You can read part one here

As diplomatic relations between China and the US deteriorate to their lowest point since they were established in 1979, a military conflict between the two countries no longer seems a far-fetched possibility.

Their last direct engagement was during the Korean war, from 1950 to 1953, at a time of sparse trade and no diplomatic relations between Beijing and Washington. The spark which set off that confrontation was fear among China’s leadership of a unified Korean peninsula loyal to the US on the doorstep.

China did not enter the conflict – which began with a Soviet-backed invasion of the south – until North Korean forces were pushed back to the Yalu River, which forms the border with China, by a UN-backed force dominated by US troops.

The surprise offensive by the People’s Liberation Army in October 1950 was the first of many attacks which eventually pushed the US-dominated forces back to the 38th parallel, where the border between North and South Korea has now stood for almost seven decades.

“You have all these contested islands, you’ve had collisions, you’ve had intimidation, you’ve had a worsening of relations,” said Michael Auslin, a fellow at Stanford University’s Hoover Institution in California. “Neither Beijing nor Washington will choose war, but I am very worried they could stumble.”

The South China Sea is one of the most coveted bodies of water in the world. Every year, one-third of the world’s shipping passes through it, carrying more than US$3 trillion worth of trade. Abundant fisheries as well as potentially massive oil and gas reserves are some of the many other draws which also make it one of the world’s most heavily-disputed areas.

While the US navy – with its bases in Japan, Philippines, and Guam – dominates much of the Pacific Ocean, China has long tried to counter this influence by occupying many of the islands in the South China Sea – or building its own – using historic claims to around 90 per cent of the waterway.

The track record of accidents around these disputed islands is why Auslin chose the South China Sea as the flashpoint for a US-China military conflict scenario he included in his book Asia’s New Geopolitics, published in April.

Examples he gives include 2001, when a US intelligence aircraft and a Chinese fighter jet crashed 160km off the Paracel Islands, an archipelago in the South China Sea controlled by China which is also claimed by Vietnam and Taiwan.

There has not been a similar diplomatic crisis since, but there have been many close calls. The US navy regularly conducts freedom of navigation drills through waterways controlled by China, which frequently brings both sides’ navies into close range.

In October 2018, a Chinese destroyer came within 40 metres of a US warship

, and a collision was only narrowly avoided. “What happens if a US ship is sunk? Would we not have to go to war because of that?” Auslin said.

From the US perspective, a fight with China over the South China Sea was more understandable than a fight over Taiwan– another potential flashpoint – according to Auslin, because the US had “clearer alliance commitments” to the Philippines than to the self-governing island as well as the concept of freedom of navigation.

“Taiwan is a different story. Everyone recognises that could precipitate a full out war with China if the US chose to uphold its commitments to Taiwan, which are ambiguous,” he said. “But everyone is on a hair trigger when it comes to the South China Sea.”

Sailors on board the USS Nimitz observe the USS Ronald Reagan during dual aircraft carrier operations in the South China Sea on July 6. Photo: EPA-EFE

In response, Chinese foreign ministry spokesperson Zhao Lijian said one day later that China was committed to peacefully resolving disputes with other nations.

Hawkish commentators with links to China’s military establishment have gone further, however. In December 2018, retired PLA major general Luo Yuan suggested hitting one or two US aircraft carriers in the South China Sea with missiles would break US morale in the region.

The outcome of any military conflict in the South China Sea looks unfavourable to the US on paper, according to David Ochmanek, a former military planner in the US defence department. In a 2019 talk he gave in Washington, he said that, when fighting China, the US “gets its ass handed to it”.

Ochmanek, now a senior researcher with California-based think tank Rand, has been involved in many war games simulating large-scale conflict with China over the past 15 years and has seen how the capabilities of the emerging superpower have changed.

“So let’s say it was 2005. If we were to run a scenario for 2010, Chinese capabilities weren’t fully mature, and what you would see was a stand-off, not a clear-cut victory or defeat for either side, but still there were surprising numbers of casualties and losses to the United States. The lethality of Chinese forces was growing dramatically,” he said.

One of the challenges for the US is that the advancements developed by the Chinese military have been tailor-made for the South China Sea, according to experts.

Charlie Lyons Jones, a researcher with the Australian Strategic Policy Institute, said the PLA’s strategy centred around denying the US military access to China’s near seas or, at a minimum, challenging its freedom of movement within the “first island chain” – a term used by Chinese military leaders for the archipelagos fencing the seas controlled or claimed by Beijing, which includes areas of the East China Sea.

“The PLA’s rapid build-up of missile forces, particularly those with anti-ship capabilities, is the natural outgrowth of (this) strategy,” he said.

China’s overall military strength – from submarines to space systems – has grown in recent decades, forcing the Pentagon to take notice. In 2015, Rand published a report commissioned by the Department of Defence comparing US and China military prowess on all fronts.

While noting that China’s “technology and operational proficiency still lag behind those of the United States”, the report said China was rapidly narrowing the gap.

In 2018, Ochmanek wrote a report in which he pinpointed five of China’s rapidly improving military capabilities that should concern the US: accurate long-range missiles; modern air force and anti-aircraft defence systems; systems for reconnaissance and targeting; cyberwarfare; and nuclear weapons that could target the US.

Even in areas where the US still holds a clear advantage, Chinese quantity could overcome American quality, according to Ochmanek.

“No naval officer would trade a US shipyard or ship for a Chinese shipyard or ship. Qualitatively, our ships are superior to any in the world, more survivable, more capable. But where the Chinese outstrip us is in sheer capacity, in part because they have such a large civilian industry,” he said.

Geographically, China also has the upper-hand. As the 2015 Rand report noted, “China does not need to catch up fully in order to challenge US ability to conduct effective military operations near the Chinese mainland.” 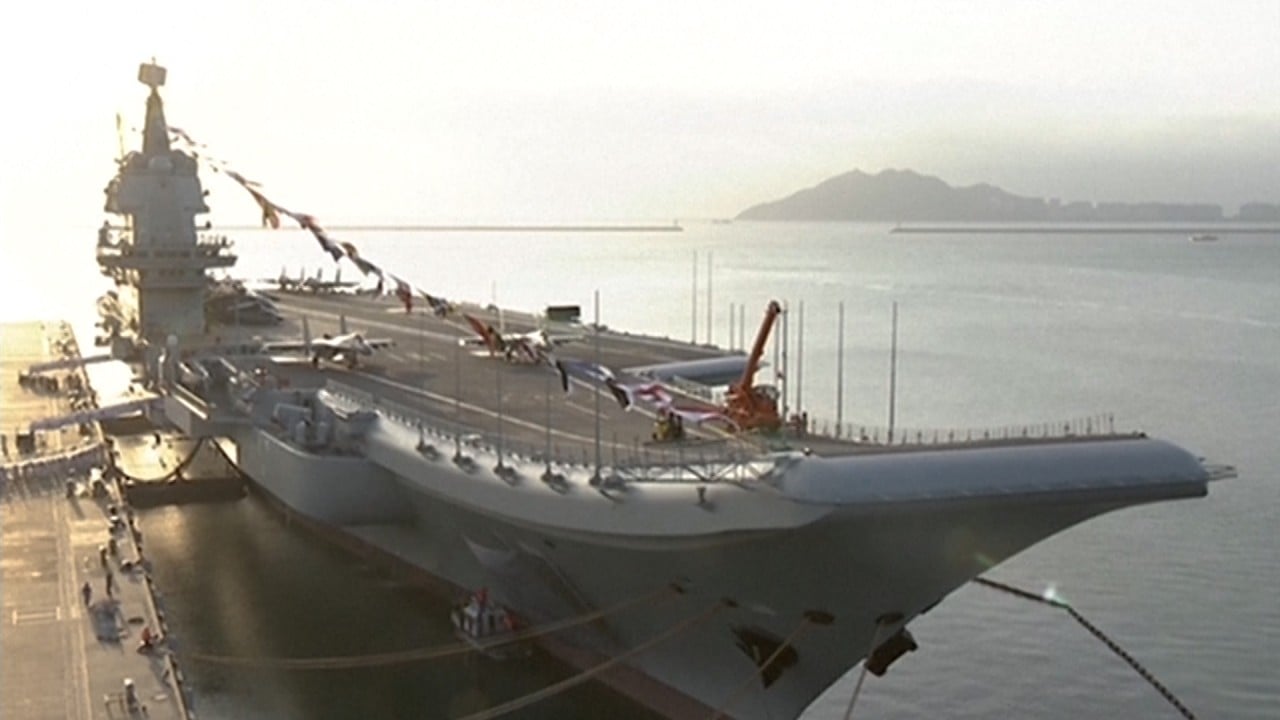 China’s proximity to the disputed areas means Chinese ships have easily swarmed contested islands to intimidate other claimant countries in the past. Experts say the same advantages would play out in a clash with US forces.

“The South China Sea is the PLA’s ‘home turf’ while the US forces have to travel long distances just to get there – and that’s before the fighting starts. There are also huge challenges with sustaining a force over long supply lines and far away from your main bases,” said Grant Newsham, a senior research fellow at the Japan Forum for Strategic Studies.

“And, as a general rule, when an enemy comes closer to your defences he’s an easier target and it’s easier to deploy forces against him.”

Newsham also said the PLA’s man-made islands would come in handy in the event of a military conflict, pushing China’s first line of defence forward and increasing its ability to monitor the movement of US forces. These advantages were “particularly important during the so-called phase-zero where jockeying for position takes place”. 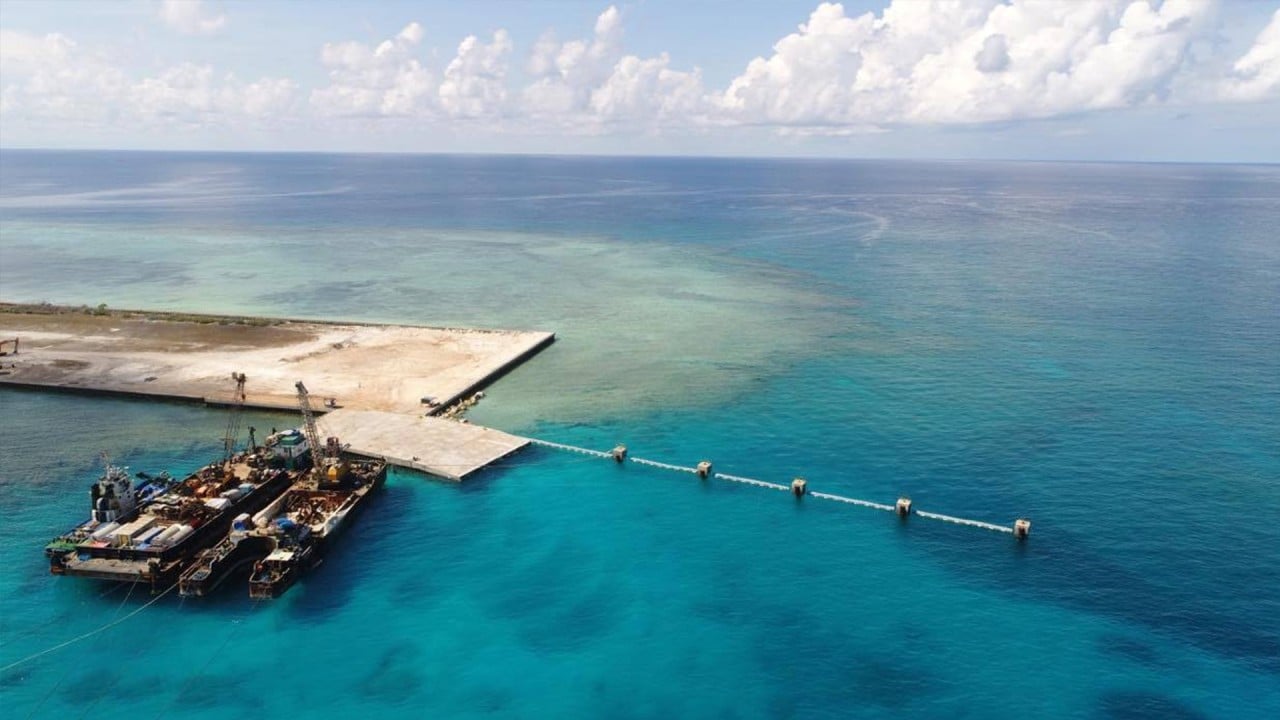 However, the balance of the scales could tip towards the US if the military conflict were prolonged. Ochmanek from Rand noted that, in the event of a war, China’s proximity to the flashpoints of the South China Sea could become a disadvantage.

“At the strategic level, it may be an advantage to fight a war on someone else’s doorstep because if you’re going to fight a war in the Taiwan Strait, in the South China Sea, or in the East China Sea, it is going to disrupt the Chinese economy, no merchant shipping is going to go into the conflict zone,” he said.

Newsham, a former US marine officer and diplomat, said the playing field would be levelled if fighting expanded outwards. “If the fight is farther afield – say, outside the ‘first island chain’ and beyond – China’s advantages – long range shore-based weaponry, surveillance, ability to amass large numbers of ships, submarines, aircraft, for example – fall off considerably,” he said.

Hu Bo, director of the Centre for Maritime Strategy Studies at Peking University, said any conflict would “definitely not be large-scale but small-scale”, but that some members of the US military might therefore think a “controllable conflict” in the South China Sea was desirable.

“The issue is that the consequences of these military conflicts cannot be imagined, it’s impossible to control a war once it happens,” he said.

Read part one of this series
which investigates whether China-US relations are drifting closer towards war.

and part three, on how Beijing’s ‘red lines’ over Taiwan

could lead to war with US

Purchase the 120+ page China Internet Report 2020 Pro Edition, brought to you by SCMP Research, and enjoy a 30% discount (original price US$400). The report includes deep-dive analysis, trends, and case studies on the 10 most important internet sectors. Now in its 3rd year, this go-to source for understanding China tech also comes with exclusive access to 6+ webinars with C-level executives, including Charles Li, CEO of HKEX, James Peng, CEO/founder of Pony.ai, and senior executives from Alibaba, Huawei, Kuaishou, Pinduoduo, and more. Offer valid until 31 August 2020. To purchase, please
click here