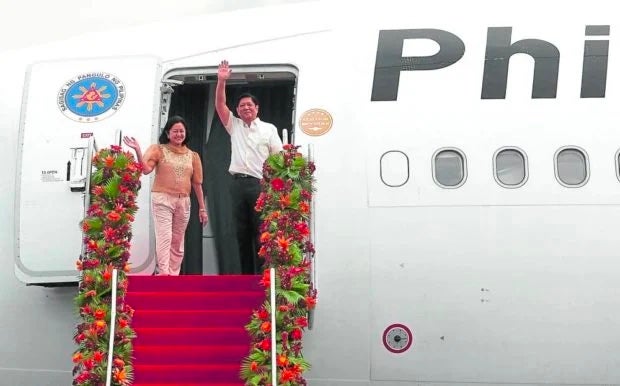 MANILA, Philippines — President Ferdinand Marcos Jr. flew to China on Tuesday for a three-day state visit, as he seeks to open what he called Manila’s “new chapter” with Beijing even amid lingering tensions due to political and security issues in the West Philippine Sea.

In a speech before boarding his flight at Villamor Air Base, the president said he was looking forward to discussing “political-security issues of a bilateral and regional nature” with Chinese President Xi Jinping.

“The issues between our two countries are problems that do not belong between two friends such as Philippines and China,” Marcos said, adding: “We will seek to resolve those issues to the mutual benefit of our two countries.”

It was his first visit to Beijing since winning the presidency in May last year and succeeding Rodrigo Duterte, who had cultivated warm relations with China while often appearing hostile toward the country’s treaty ally, the United States.

Yet Marcos, since taking office, has also moved to mend ties with Washington in what some foreign policy watchers described as a “delicate balancing act.”

Julio Amador III, president of the Foundation for the National Interest, said the trip was crucial, considering the country’s economic ties and “rocky” security issues with China.

“The meeting between the two leaders will hopefully allow for more open communications, but it is the follow-up actions that will be critical,” he told the Inquirer.

The Beijing trip “will test how good [Marcos] is in maintaining a delicate balancing act in his foreign policy, especially between the US and China,” said Aaron Jed Rabena, a research fellow at Asia-Pacific Pathways to Progress.

Marcos should be able to lay out the country’s “red lines” on the West Philippine Sea and on Taiwan, the other touchy issue between China and the US, said Mark Manantan of the Honolulu-based foreign policy research institute Pacific Forum.

“He has to have a serious discussion about Taiwan and South China Sea… It will also be to the benefit of China if it says its intent on Taiwan in Southeast Asia. It has to recognize the sentiment of Southeast Asia toward Taiwan,” he told the Inquirer.

But in his speech, Marcos did not mention the maritime dispute with China, which has further strained relations between the two countries after a 2016 arbitral ruling invalidating the latter’s sweeping claims in practically the whole South China Sea.

Beijing has refused to recognize the 2016 Hague ruling that recognized the Philippines’ sovereign right to fish and explore for resources in the West Philippine Sea, referring to waters within the country’s 370-kilometer exclusive economic zone (EEZ) in the South China Sea.

“As I leave for Beijing, I will be opening a new chapter in our Comprehensive Strategic Cooperation with China,” Marcos said in his prepared speech.

He added that he would “foster meaningful relations and broaden our cooperation” with China in agriculture, energy, infrastructure, science and technology, trade and investment, and people-to-people exchanges.

On his first full day in Beijing on Wednesday, Marcos will sit in meetings with Li Zhanshu, chair of the Standing Committee of the National People’s Congress, Chinese Premier Li Keqiang, and Xi.

“I look forward to my meeting with President Xi as we work toward shifting the trajectory of our relations to a higher gear that would hopefully bring numerous prospects and abundant opportunities for the peace and development to the peoples of both our countries,” the president said.

The Jan. 4 bilateral talks between Marcos and Xi will be their second meeting since the Asia-Pacific Economic Cooperation summit in Bangkok, Thailand, in November last year.

The president also affirmed what according to his administration were China’s roles as the country’s largest trading partner, as a major source of official development assistance, and as the second-largest source of tourist arrivals before the pandemic.

He thanked China for being the first country to send COVID-19 vaccines to the Philippines in February 2021 as countries around the world struggled to secure jabs.

“You were the first to come to our aid,” he said, adding that aside from vaccines, Beijing also provided personal protective equipment and technical assistance to the country.

Marcos also said he would push for the resumption of tourism and cultural cooperation between Manila and Beijing.

“As our doors open up in the new normal, I will invite our Chinese neighbors to once again return to the Philippines as tourists, as students, investors,” he said.

Also on Tuesday, activist groups Bayan, Pamalakaya, and Kilusang Magbubukid ng Pilipinas (KMP) urged the president to stand his ground and assert the Philippines’ sovereignty over the disputed waters in the South China Sea.

“The elephant in the room is still the arbitral win of the Philippines in the West Philippine Sea. Marcos must not diminish our legal victory during his state visit,” Bayan secretary general Renato Reyes said.

Marcos should “do what he can, in accordance with diplomacy, to assert our sovereign rights and not cede an inch of our EEZ,” he added.

“All it takes is the Marcos administration’s strong political will to hold China accountable for irreversible damage to our territorial waters caused by its plunder and aggression,” he said.

“Smuggled onions from China have pushed up onion retail prices to as much as P700 per kilo in local markets. This is very alarming,” he said.

“[It] is only just for Marcos Jr. to diplomatically call the attention of Chinese authorities regarding the unbridled, large-scale smuggling of billions worth of vegetables from China,” he added.