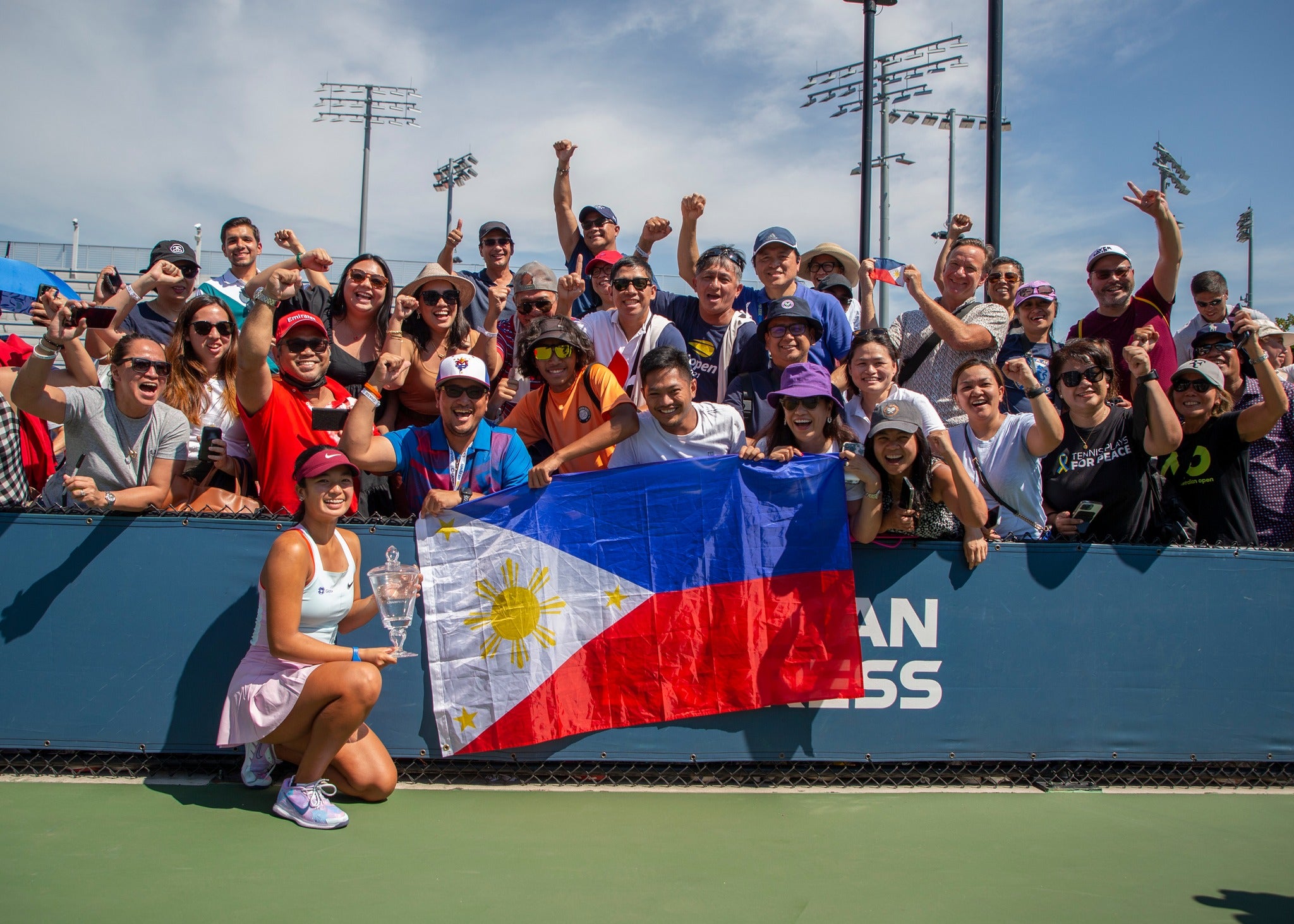 Alex Eala always had her eyes on the prize. She then poses with her biggest support system, (from left, front row) father Mike, brother Miko and mom Rizza, together with the Philippine flag and delirious Filipino fans. —PHOTO BY KEATS LONDON

MANILA, Philippines — Alex Eala was nothing but grateful for the support of her Filipino fans, who stayed up all night and even watched pay-per-view back home, to watch her magical run in the US Open girls’ singles.

The 17-year-old tennis star admitted she was surprised by the support she received from the country that has sports fans who are generally more passionate about basketball and volleyball.

“Definitely super surprised with everyone who tuned in to watch. As you said, the Philippines is a basketball [crazy country] and I would say also a volleyball-dominated country. People tend to enjoy those more,” said Eala during her virtual press conference on Friday.

For the newly-crowned US Open juniors champion, it feels good to see more of her fellow countrymen appreciating other sports, where the Filipinos excel, too.

“I think it’s a good thing that they’re starting to appreciate more sports. I think it’s important that we give attention to all of the athletes,” she said. “I’m super happy and super grateful for all of the small things, pay-per-view or staying up in the night. I’m super thankful.”

With her recent historic feat of becoming the first Filipino to become a Grand Slam singles champion, Eala also joined a group of athletes outside basketball and volleyball who have brought honor to the country, like EJ Obiena, who finished first place in six of his eight world tournaments, and Tokyo Olympic gold medalist Hidilyn Diaz.

The Filipinas also made history, booking a ticket to the Fifa Women’s World Cup 2023, winning a championship in the AFF Women’s Cup, and a historic bronze medal in the 31st Southeast Asian Games in Hanoi, Vietnam. Yuka Saso also brought honor to the country by winning US Women’s Open golf win in San Francisco’s Olympic Club in June 2021 before deciding to change her citizenship.

Eala didn’t expect that speaking in Filipino upon receiving her US Open trophy would have a significant impact on the Filipino fans, who were inspired and felt pride after watching her speech.

“I didn’t think that it would be such a big thing. But I’ve been getting a lot of positive feedback from that. And I guess it hit a spot for the Filipinos because it is not a lot of the times that you hear Tagalog on a worldwide stage,” she said. “I’m super happy (with) the impact it’s had on the Filipino people and I hope that it meant something to them.”

The Rafael Nadal Academy scholar admitted she misses home. But she still doesn’t know when is she coming back to the Philippines due to her busy schedule in the pro circuits for the remainder of the year.

“I would really love to go home. Especially my family, deserves to share this win with me and I just want to tell them about all of my matches, all of the experiences that I had but unfortunately, it’s not so easy to schedule that,” Eala said. “I have a lot of tournaments and I think it’s part of the journey and it’s part of keeping my head down is that I’m reminded that I still have to work and life still goes on even after a big win.”

Despite being away from the country for several months, the young tennis sensation expressed her love to the fans, hoping to give back someday.

“I would just like to say thank you, that’s really all I can say right now. There’s so much that you’ve done to help me and motivate me. And I hope that I can return the favor and maybe just make you a little happier in the day by seeing my matches, or seeing that I won, or seeing my speech or whatever,” she said. “But thank you so much for the support It really means a lot to me and it does affect me and make an impact.”